Sober at the gay bar

At 24, I gave up drinking. But I didn't want to give up my lifestyle, or my nights on the town 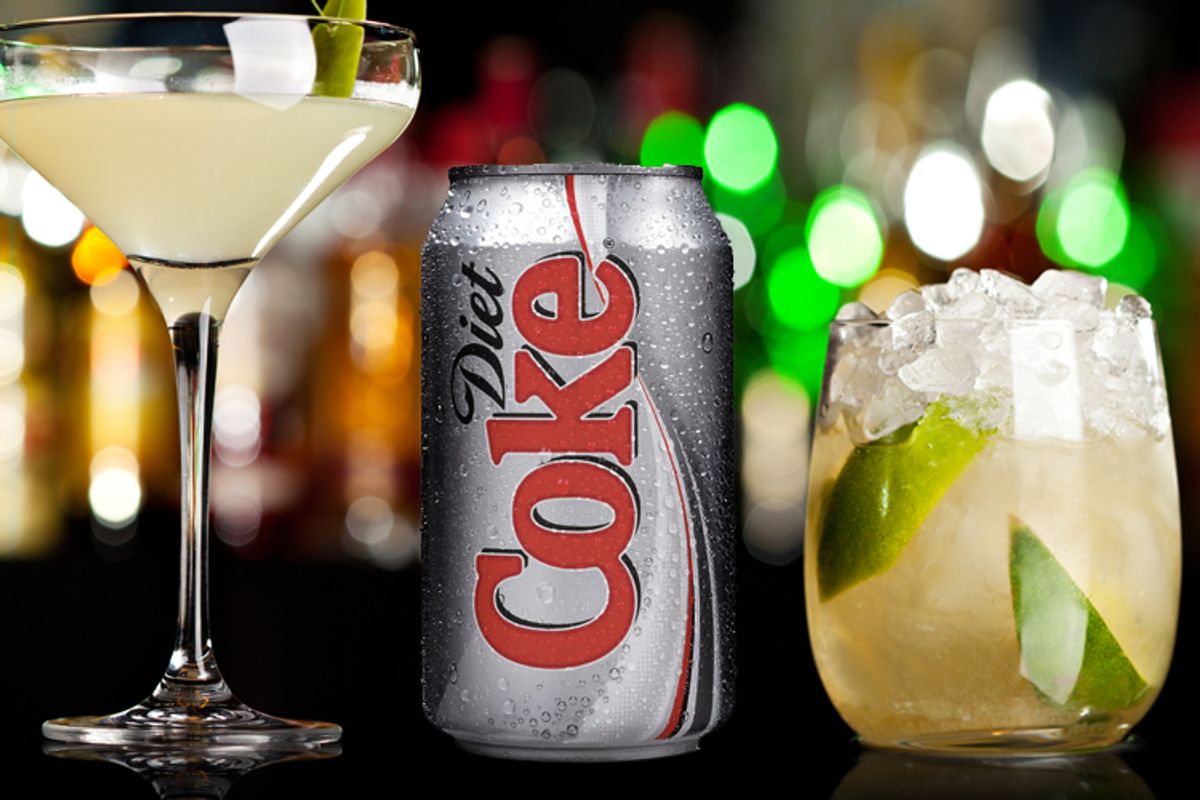 “We have to keep drinking,” my friend said, “or our personalities will get worse.”

Four of us sat at a high top in Big Chicks, a gay bar/restaurant/euchre-tournament venue within walking distance of my apartment in Chicago. All around us, porn-stached men looked past each other, trying to find their friends or their potential friend-for-the-night. My table ordered pitchers of Blue Moon while I sipped on Diet Coke after Diet Coke. If my friend’s drinking theory was true, it meant my personality had been getting worse every day (and I hadn’t started with much to spare).

Nearly two years earlier, I visited a therapist to talk about the end of my first love, and she suggested I was an alcoholic. I thought therapy would be about bashing my ex, not my own problems. Many people had told me I had a drinking problem, so just let me talk about the jerk who broke up with me. Nope, she was having none of it. She said he did me a favor by breaking up with me, because I needed to get my drinking in check. Rude.

Instead of putting down the bottle, I decided to give up men and therapy for a year. Taking my newly single, non-therapied self off the market for a while sounded way more reasonable than sobriety. About a week after the therapist’s proclamation, I met up with a friend at a gay pride parade, and later in the day, we ended up at a hotel party. Things I remember about this party: smoking a cigarette after playing beach soccer, bumping into a staff member from my university, the haze of a gym teacher’s rented room. Within 24 hours, I failed my no-boys decree. And this broken promise shook my core. I don’t know how to explain it. My drinking had already gotten me arrested (DUI), nearly kicked out of my university, fired from a job, and spoiled countless relationships, but I had never considered it a problem. When I finally shook off my hangover, I went back to therapy -- and gave up drinking at the age of 24. But I didn’t want to stop going to bars. I still wanted nights out on the town.

From my very first fake ID and backdoor club sneak-in, I loved going to gay bars. I mean: GAY and BAR. No two words next to each other ever made me happier. In those neon-lit gay bars, where men swished their hips and kissed each other, I found my people. Growing up as a Southern Baptist, I dealt with the residual fire-and-brimstone feelings that came along with homosexuality. Fun times. Gay bars with colorful lights and muscle-tee men gave me a glimpse of a different life than church hymns. What I first learned about gay culture formed in those moments when I held another man’s gaze and danced until sunrise. Those nights taught me how to dress, talk, flirt and love.

My alcoholism isn’t a result of my sexuality, but gay life tends to glamorize drinking. We hang out at white parties and tea dances and liquid brunches where alcohol flows as freely as the latest gossip. My social life revolved around drinks with friends, and saying, “I’m an alcoholic,” meant being excluded from my favorite club. The gay man I spent all those nights drinking into existence needed to look himself in the bloodshot eyes and figure out a few things.

That night at Big Chicks, we left the bar around midnight, and I went home. At least one of my friends presumably went out to Boystown to continue his night around men who drink vodka and diet tonic waters (or whatever the health-conscious drink now). As I gave my friends goodbye hugs, the only pressure I felt was to catch a bus.

My lightness felt a lot different than the first time I went out sober to a gay bar.

Three months after my last drink I sat on a red vinyl bar stool in one of my favorite Florida gay bars with a getting-drunk college friend. I liked sitting in a smoky gay bar (smoking not yet banned in some Florida bars) without the judgey eyes of new sobriety.  For me, going to a gay bar felt like eating a home-cooked meal. Sobriety made me hungry.

“I’m so proud of you,” my friend said. “It’s great you can sit here and not be tempted to drink. I wasn’t sure you could do it.” His skepticism of my three-month sobriety made sense, but I couldn’t help feeling some small part of him disliked my sobriety. “I’m gonna go get another drink,” he said. “Is that OK with you?” I nodded, and he slinked off his bar stool to order another $1 Long Island iced tea, the main reason we frequented this particular bar back in the day and why it ranked as one of my favorites.

Our friendship had formed at a time when I thought nothing of staying up until 6 a.m. drinking whisky and flirting with guys to get free drinks. We’d plan beers and beach days with our friends. Also: the after parties. But “recovering alcoholic” didn’t hold the same ring as “party boy.” Recovery meant I needed to change the things about me that bonded us together.  Instead of martinis and body shots (super-classy drinker here), I “talked about things.”

With my friend sipping his $1 Long Island, I realized most people don’t know how to deal with my situation, so sometimes they just won’t deal with me. On the dollar-night’s red vinyl bar stool I felt a collective “OK, BYYYEEE” resound from my LGBT community. I’m not saying the gay community necessarily wants people to drink alcoholically, but drinking was how we learned to relate to one another. No one wants to hang out with a buzz-kill sober person, I thought, before I decided to get going.

“Take this,” James said, handing me a bottle of some weird-sounding fruit-beer hybrid. “I can’t drink anymore tonight.”

A group of us stood in front of a Korean restaurant after eating a duck course for our friend’s birthday dinner. We needed to decide our next spot, because, well, someone brought cake and you just can’t eat cake on the street. I laughed and handed the big alcohol bottle, cold and wrapped in a black plastic bag, to another friend. No matter how hard you try to stay away from something, it might just end up in your my hand.

I don’t get mad when people drink around me, I only feel a slight – and this is rare – hint of jealousy sometimes that they can have a “normal” relationship with alcohol. But these friend-alcohol moments also remind me to get over myself. My friends and community support me in ways they can – in ways they know how. Not relying on non-sober people to “look out” for me actually makes things easier, because I don’t worry about these people letting me down in sobriety. Community is important, but it can’t be everything to everybody.

“We could go to Big Chicks,” someone said. Our group always took forever to make decisions. The birthday girl vetoed the Big Chicks idea, because the group planned on BYOB-ing and such an act is bad form at a bar. A part of me was happy we chose not to go out to Big Chicks; a smaller part, a little disappointed.

I rarely went out to gay bars and only if I felt comfortable and had completed a complicated emotional algorithm. A common thought prevails that recovering alcoholics only hang out by themselves in dark corners or with other alcoholics in dingy rooms. Some sober people never go to bars, and I respect what works for them.  Don’t get me wrong, I love others in recovery, they help keep me sober, but in my mid-20s I still sometimes want to dance to bad pop music with other gay people.

Since the Big Chicks we-have-to-keep-drinking night about two months earlier, I hadn’t gone out. I knew I would, eventually. My complicated love for gay bars still stays with me. Maybe it will go away one day, maybe it won’t. Maybe I am tricking myself. Even if you feel good, how can you own something that owns you? People tell me the compulsion to drink will come back. Like an ex-lover, he will show up with clouds disguised as flowers. I’m worried my mantras and resolutions might get left at home like my umbrella. Timing never was my strong suit. I still find comfort and familiarity in the loud music and pulse of gay bars – it’s what I know. I wish this wasn’t true, but I’d be lying if I said otherwise.

As my friend group walked to our chosen cake-eating spot, a comedy theater down the street, my desire to go out to the bar passed. None of these friends had known me pre-sobriety. We laughed and linked arms and the night felt right. Thinking about it later, alone, away from my friend’s birthday cake, I realized I probably wouldn’t have gone to the bar with them anyway. Why push it? I was sitting at a table with people who respected me. I was starting to keep my promises.

And anyway, I hadn’t been wearing my dancing shoes that night. I loved the fact that I no longer fell on the dance floor, taking anyone within arm’s reach to the ground with me. Now, if I tripped, I could catch myself, or at least refrain from knocking over anyone else. When I stopped drinking, my personality may or may not have gotten better. But my dancing definitely improved.