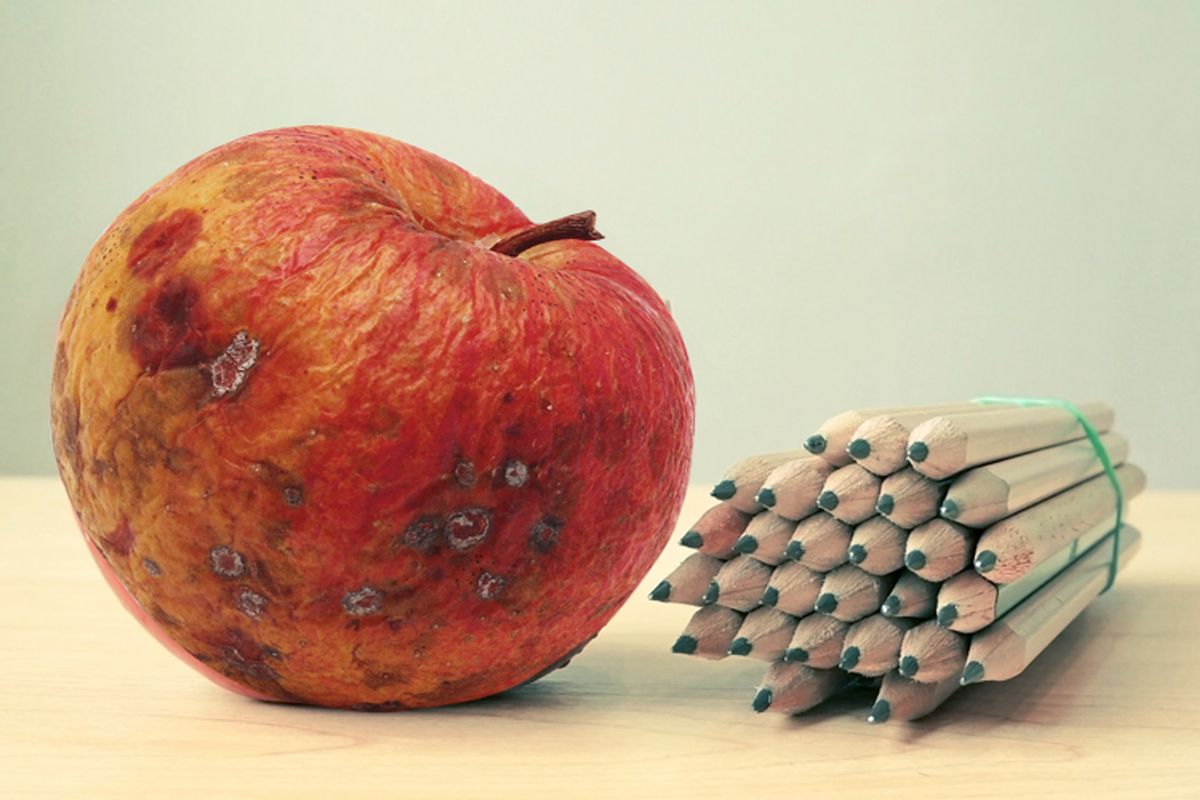 Just in time for National Charter School Week, there's a new report highlighting the predictable perils of turning education into a poorly regulated business. Titled “Charter School Vulnerabilities to Waste, Fraud and Abuse,” the report focused on 15 states representing large charter markets, out of the 42 states that have charter schools. Drawing on news reports, criminal complaints, regulatory findings, audits and other sources, it “found fraud, waste and abuse cases totaling over $100 million in losses to taxpayers,” but warned that due to inadequate oversight, “the fraud and mismanagement that has been uncovered thus far might be just the tip of the iceberg.”

While there are plenty of other troubling issues surrounding charter schools — from high rates of racial segregation, to their lackluster overall performance records, to questionable admission and expulsion practices — this report sets all those admittedly important issues aside to focus squarely on activity that appears it could be criminal, and arguably totally out of control. It does not even mention questions raised by sky-high salaries paid to some charter CEOs, such as 16 New York City charter school CEOs who earned more than the head of the city's public school system in 2011-12. Crime, not greed, is the focus here.

In short, the report is about as apolitical as can be imagined: It is narrowly focused on a white-collar crime wave of staggering proportions, and what can be done about it within the existing framework of widespread charter schools.

The report, co-authored by the Center for Popular Democracy and Integrity in Education, makes the point that the problem of charter school waste, fraud and abuse, which it focuses on, is just one symptom of the underlying problem: inadequate regulation of charter schools. But it's a massive symptom, which has so far received only fragmentary coverage.The report takes its title from a section of a report to Congress by the Department of Education’s Office of the Inspector General, a report that took note of “a steady increase in the number of charter school complaints” and warned that state level agencies were failing “to provide adequate oversight needed to ensure that Federal funds [were] properly used and accounted for.”

But, the report noted, it's not just the federal government that should be concerned. Reform efforts are underway in several states; Hawaii even repealed its existing charter school law in 2013, and put strict new oversight measures in place, and “Even the Walton Family Foundation, an avid charter advocate, launched a $5 million campaign in 2012 to make oversight of charters schools more stringent.”

"We expected to find a fair amount of fraud when we began this project, but we did not expect to find over $100 million in taxpayer dollars lost," said Kyle Serrette, the director of education justice at the Center for Popular Democracy. “That's just in 15 states. And that figure fails to capture the real harm to children. Clearly, we should hit the pause button on charter expansion until there is a better oversight system in place to protect our children and our communities."

The report explained that the problem has its roots in a historical disconnect between the original intentions that launched the charter school movement and the commercial forces that have overtaken it since. At first, the report noted:

Lawmakers created charter schools to allow educators to explore new methods and models of teaching. To allow this to happen, they exempted the schools from the vast majority of regulations governing the traditional public school system. The goal was to incubate innovations that could then be used to improve public schools. i The ability to take calculated risks with small populations of willing teachers, parents, and students was the original design. With so few people and schools involved, the risk to participants and the public was relatively low.

But the character of the movement has changed dramatically since then. As charter school growth has skyrocketed (doubling three times since 2000), “the risks are high and growing, while the benefits are less clear,” the report continued, adding:

This is not an uncommon occurrence in our nation’s history. In the past—in some cases, our very recent past—industries such as banking and lending have outgrown their respective regulatory safety nets. Without sufficient regulations to ensure true public accountability, incompetent and/or unethical individuals and firms can (and have) inflict great harm on communities.

The report found that “charter operator fraud and mismanagement is endemic to the vast majority of states that have passed a charter school law.” It organized the abuse into six basic categories, each of which is treated in its own section:

Perhaps most disturbingly, under the first category, crooked charter school officials displayed a wide range of lavish, compulsive or tawdry tastes. Examples include:

• Joel Pourier, former CEO of Oh Day Aki Heart Charter School in Minnesota, who embezzled $1.38 million from 2003 to 2008. He used the money on houses, cars, and trips to strip clubs. Meanwhile, according to an article in the Star Tribune, the school “lacked funds for field trips, supplies, computers and textbooks.”

• Nicholas Trombetta, founder of the Pennsylvania Cyber Charter School is accused of diverting funds from it for his private purchases. He allegedly bought houses, a Florida Condominium and a $300,000 plane, hid income from the IRS, formed businesses that billed even though they had done no work, and took $550,000 in kickbacks for a laptop computer contract.

• A regular financial audit in 2009 of the Langston Hughes Academy in New Orleans uncovered theft of $660,000 by Kelly Thompson, the school’s business manager. Thompson admitted that from shortly after she assumed the position until she was fired 15 months later, she diverted funds to herself in order to support her gambling in local casinos.

Others spent their stolen money on everything from a pair of jet skis for $18,000 to combined receipts of $228 for cigarettes and beer, to over $30,000 on personal items from Lord & Taylor, Saks Fifth Avenue, Louis Vuitton, Coach and Tommy Hilfiger. But the real damage came from the theft of resources for children's future.

“Our school system exists to serve students and enrich communities,” said Sabrina Stevens, executive director of Integrity in Education. “School funding is too scarce as it is; we can hardly afford to waste the resources we do have on people who would prioritize exotic vacations over school supplies or food for children. We also can’t continue to rely on the media or isolated whistle-blowers to identify these problems. We need to have rules in place that can systematically weed out incompetent or unscrupulous charter operators before they pose a risk to students and taxpayers.”

Stevens was not just expressing a nebulous hope. The report also offered a set of proposals on how to go about reining in the abuses. Initial suggestions on how to respond to each kind of abuse are presented in each of the six areas mentioned above, but there is also a comprehensive framework integrating them into a coherent whole.

The report's first proposal is that all states should establish an oversight “Office of Charter Schools.” It “should have the statutory responsibility, authority, and resources to investigate fraud, waste, mismanagement and misconduct,” including the authority to refer findings for prosecution. It should have “an appropriate level of staffing” so that “The ratio of charter schools to full-time investigators employed by the Office should not exceed ten to one.” It should have the power to place distribution of charter school funds on hold. And it should have the authority to intervene in funding or other decisions made by charter authorizing entities if they are violating state or federal law.

A second proposal is that states amend their charter laws to “explicitly declare that charter schools are public schools, and are subject to the same non-discrimination and transparency requirements as are other publicly funded schools.”

A third proposal is to require public online availability of each charter school’s original application and charter agreement.

Not surprisingly, a number of proposals target those running charter schools. Specifically, regarding charter school governing board members, the report proposes: 1) Require them to live in close proximity to the school/s physical location. 2) Require boards to be elected “with representation of parents (elected by parents), teachers (elected by teachers) and in the case of high schools, students (elected by students).” Other board members should be “residents of the school district in which the school/s operate.” 3) Require board members to file full financial disclosure and conflict-of-interest reports, similar to those required of traditional school district board members — and post them online on the school's website. 4) Hold board members legally liable for fraud or malfeasance occurring at the school or schools that they oversee.

If most of these sound like simple common sense, that's pretty much just the point. There are plenty of issues around education that are controversial. Protecting ourselves, our children and their future against a massive white-collar crime wave should not be one of them.