How whites should talk about white privilege: (Hint, it's not like Tal Fortgang)

The Fortgang and Stephen Colbert debates are missing this: Outspoken white allies who acknowledge their privilege 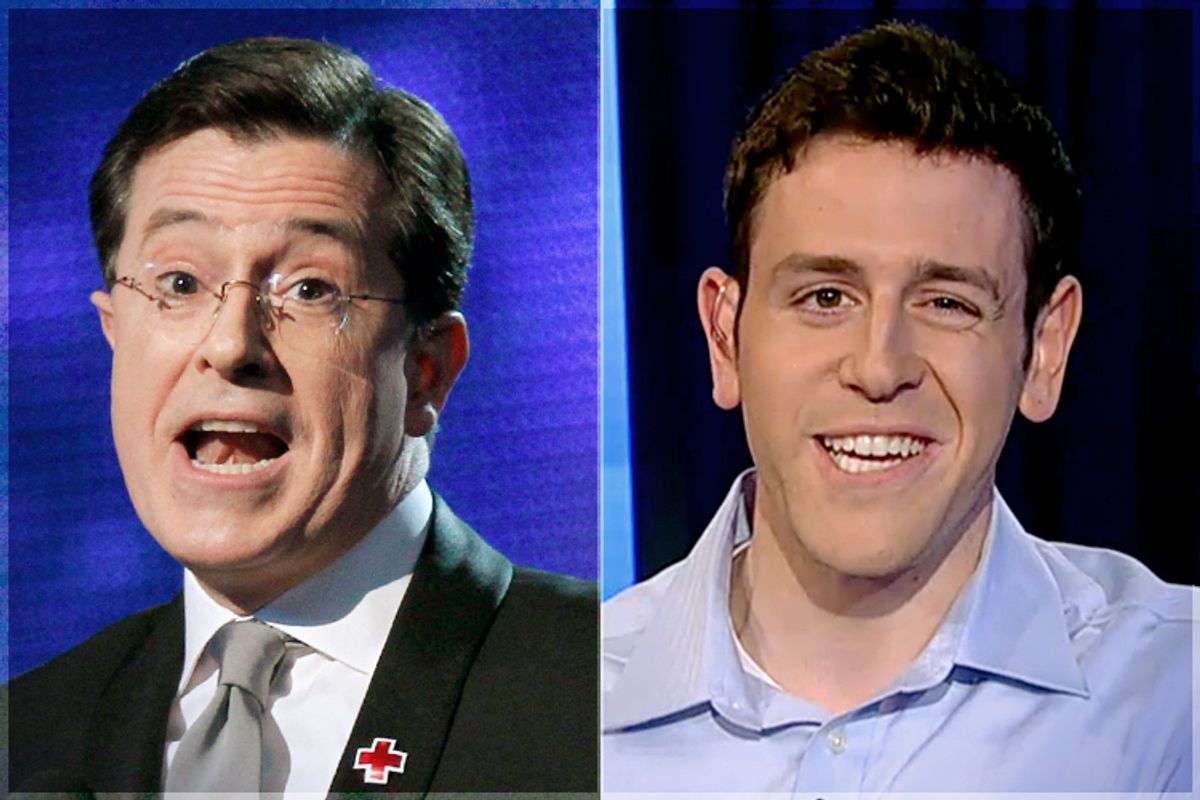 This reflection began, innocently enough, with my naive desire to talk about satire. That #CancelColbert happened midway through my course at Georgetown — called “Satire” — was comically exciting for me. After all, it's not every day that a professional 18th-centuryist is blessed with a news cycle so relevant to classroom discussion. Weeks before #CancelColbert happened, my students and I were playing clips from "The Colbert Report" in conjunction with our reading of Jonathan Swift's monumental “A Modest Proposal,” probing the question of how we recognize that seemingly inscrutable line between artful satire and merely inflammatory or counterproductive speech.

Indeed, the idea of slaughtering, flaying, stewing and eating an innocent human child was, on the face of it, every bit as offensive to 18th-century readers as were Colbert's recent references to Asian-Americans. This is particularly the case because “A Modest Proposal” was largely a response to the effects of colonial subjugation of the Irish under English rule, the Irish being a “race” of people about whom the English had no shortage of crude and offensive stereotypes.  This was, of course, before the Irish became white, and when Celtic peoples were represented in novels like Tobias Smollett’s "Humphry Clinker" as having more in common with Native Americans than with white Britons.

What, then, is the basis for canonizing “A Modest Proposal” and canceling Colbert? Without collapsing the quality and motivations of Swift's satire with Colbert's, we can point to discrete elements of the former that alert us to both its quality qua satire and its relative political importance. Swift, for one, was writing with his own ethnic ties, however complicated, to the impoverished Irish community of “Papists” he was satirically proposing to cull. And unlike Colbert, who remains steadfastly in character in his satires, Swift gives us a refutatio — in classical rhetoric, a counter-argument to the proposal — in which he lays out a number of his own serious proposals for productive political reform: taxing absentee landlords, cracking down on gambling and protecting Irish trade and manufacturing interests. By “hiding” his serious proposals in plain sight in the refutatio, Swift defends his satire from those who would take it too literally.

Colbert, on the other hand, never breaks out of his “modest proposal” with even a veiled critique of the racist terms he's employing, risking too straightforward or uncritical a representation of himself as a white man uttering racist epithets. I do find Colbert's satire compelling, but I also find what he did deeply problematic, precisely because this unwavering portrayal of the white racist came at the expense of a group — Asian-Americans — with whom media outlets of all kinds already take disproportionately unscrupulous license.

We could, then, have a conversation of this sort about the limits, merits and contexts of satire in such a way that would shed light on the graver issues of race, representation and privilege that #CancelColbert raises. But while “the limits of satire” was one of the items that #CancelColbert allegedly “got us talking about,” our conversation seemed more, to me, about the limitlessness of identity politics. To do at the height of #CancelColbert mania what I've just done above would have been to invite accusations of both #Mansplaining and #Whitesplaining, and perhaps still does, notwithstanding my genuine interest in the politics of satire and my wonderful students this past semester in ENGL 278, “Satire.”

As one who believes in acknowledging privilege, and who is frustrated by the extent to which our society allows portrayals, puns and slurs against Asian-Americans that wouldn't fly with other races and ethnicities not beleaguered by the “model minority” stereotype, the discourse surrounding #CancelColbert brought me to a crossroads as a white, male advocate for those battling racism and oppression in its many forms. My sense of this crossroads is only heightened by the recent controversy over Princeton first-year Tal Fortgang’s apologia for white privilege. Our conversations about white privilege are stilted and, understandably, full of animosity; they typically take two over-trodden paths.

Down the rightward path, a conservative wants to flatten the definition of racism, such that slurs against a dominant or hegemonic group are morally equivalent to slurs against an historically colonized or subjected group, a path on which “creepy-ass cracker” is tantamount to the n-word, and white privilege is merely the complaint of haters. This is an absurd path to tread, for reasons both historical and present that you don't need me to 'splain here. Down the leftward path, an activist views white people as “the enemy,” and asks that white advocates (admittedly, like me) withhold knowledge of and interest in questions of race by adopting a self-effacing posture and, for once, just shutting up.

My sense is that people like Tal Fortgang are hearing just this sort of call to self-effacement in requests to “check your white privilege,” and experiencing such a call as deeply unjust and dehumanizing. Suey Park is correct to point out that too often when white people like Colbert are misunderstood, we feel the imperative to humanize and contextualize them so that we may better understand; whereas when people of color, like Trayvon Martin, are misunderstood (and with fatal consequences), we too often fail to humanize them, to better understand their context as beings with circumstances, desires, subjectivity and rights. But the Tal Fortgangs of the world will not react well, and will not learn from, Park’s strategy of counter-dehumanization. I understand that they’re not exactly Park’s target audience; but when I look around I see far too many white people who simply aren’t engaging in any meaningful or productive way with questions of race and of white privilege. Shouldn’t we all take some interest in engaging “the enemy”? To combat white supremacy, white privilege and structural racism, I’m sorry to say that we have to talk intelligently (and not dismissively) about whiteness, too.

I understand that this call to make a nuanced discussion of whiteness a part of our conversations about white privilege is not without its problems. My suggestion is problematic in part because the call to white self-effacement as a corrective to white privilege and structural racism has its own circular logic: Everything I say or write from my white, male body does, by definition, air the dominant perspective.  Whether mine is a voice of advocacy or a voice of hatred, our identity politics necessarily define my voice — in Suey Park’s words — as the voice of “the enemy.” I think I’m equipped to make positive contributions to the world as an advocate for those who are marginalized by racism; but if I follow my educated white liberal playbook, I have to choose between a dehumanizing self-effacement and the cultural minefield of discussing race and privilege while white and privileged. But do we really want to fold all white voices on race — advocates and bigots alike — into one void? And is it just to do so?

What those of any race or ethnicity who advocate for white self-effacement as the solution to the problem of white privilege often fail to account for is the fact that white people can’t simply step out of our white privilege any more than others can step into it (unless we’re talking about the history of racial passing, which further complicates our discussions of privilege). No matter how self-effacing we are, we can still jaywalk at an empty intersection without fear of some official asking us for our citizenship papers; we can still go to stores without be subjected to the lingering gaze of nervous shopkeepers; we can still wear hooded sweatshirts. For white advocates, shutting up doesn’t do anything to disable these privileges, nor do silence and self-effacement offer any substantive acknowledgement or critique of white privilege. Further, for white advocates who are unsatisfied with the angry and often racist and bullying white men on TV representing whiteness, shutting up is not just an abdication of the moral imperative to combat racism; shutting up in the face of racism on account of the accident of one’s own whiteness is an abandonment of selfhood, a form of deracination that does hurt, that does dehumanize. The blaring voices of TV “personalities” who think it acceptable to bully or scoff at interlocutors like Suey Park will inevitably fill the space left by silent advocates and silenced activists, representing whiteness as this horrible disease of resentment and racial obtuseness, provoking or fawning over Princeton tories and Princeton moms.

Here I do not claim to have the answers to these problems; and I certainly don’t think a credentialed white savior is required to combat white bullies and bigots. But I do think the way we talk about whiteness is a barrier to progress. Despite how uncomfortable it makes me, and what names I risk being called for admitting it, I empathize with a sliver of Tal Fortgang’s experience with the discourse of white privilege. I understand the retreat to personal history and familial heritage — the “hardships of our fathers” defense — that his essay effects, because I, too, have felt flattened, cultureless, blanco in discussions of race, the only identifiable racial qualities white people bear in such discussions being a murderous colonial past, a slaver’s legacy, or the smug mien of a Romney. I understand the urge to correct and to ‘splain: that’s not me, that’s not my heritage; and I felt this viscerally when I read Suey Park’s comments about understanding white people as “the enemy.”

For young students, in particular, college is all about fashioning and re-fashioning identities, so it’s sadly unsurprising that we see white students who feel cultureless and flattened deliberately choosing to identify with whiteness as white privilege, embracing it rather than critiquing it, since we’ve pretty much defined whiteness as privilege embodied. I suggest that this is an unfortunate consequence of the way we talk about whiteness and white privilege, defining these down to narrow boxes that allow too little movement. You could say boo hoo, white man; how does it feel on the other end, being placed into that narrow box, having your identity taken for granted, decontextualized, reduced?; and you would be right to do so. That would be fair. But I also think our objective is to have nobody feel that way, rather than to have a more equitable system of dehumanization. Acknowledging white privilege must be an exercise in evaluating our various and conflicting representations of whiteness as they relate to historical, institutional and structural racism; not merely using “check your white privilege” as, effectively, a call to self-effacement.