"You women's rights ladies, you were sick in the '90s ... You're pathetic ... You should be ashamed of yourselves" 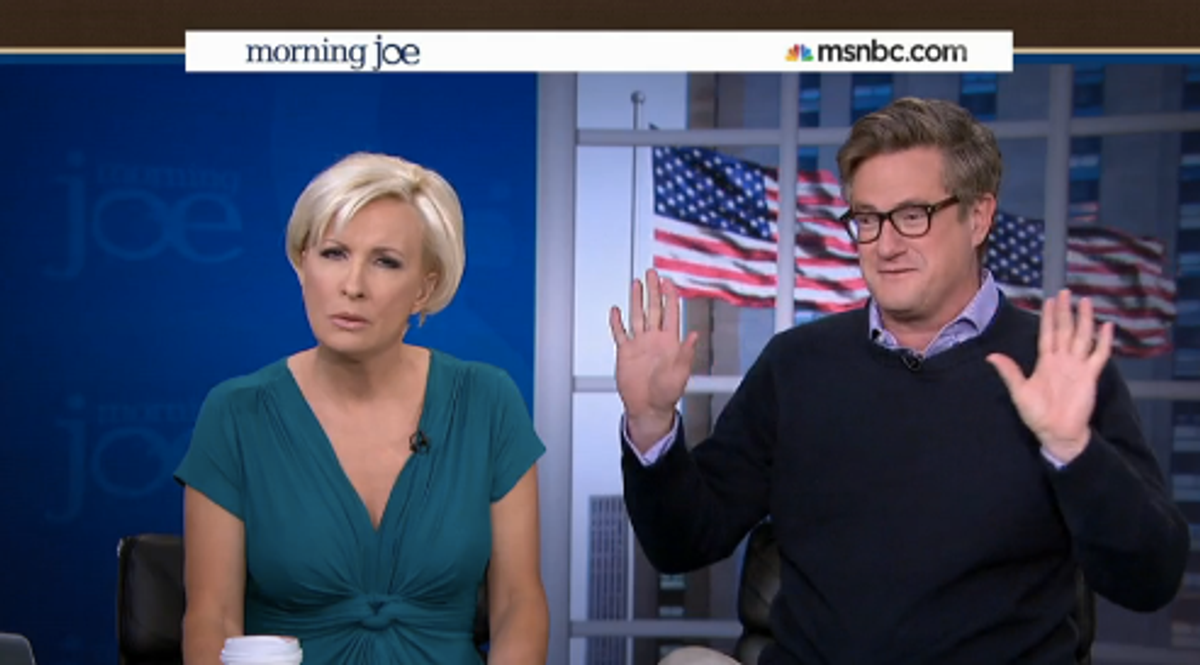 Joe Scarborough read Andrea Peyser's very nasty and very easy to ignore New York Post column about Monica Lewinsky, and it made him feel really mad. On Wednesday, he expressed this mad feeling by going on a tirade against "pathetic," "sick" "women's rights ladies" because Joe Scarborough definitely doesn't have a problem with women.

Peyser's column was nasty and unnecessary, but writing nasty and unnecessary things is what Peyser does for a living. And it would have been totally reasonable for Scarborough to call out Peyser's column and Maureen Dowd's incoherent ramblings on the issue by saying something like, "What is going on with these columns? Monica Lewinsky has been put through the ringer, but she didn't do anything wrong. These attacks on her character and motives are clearly sexist, and it's time for the public to lay off."

But instead Scarborough went on a rant against sexism that is actually just a sexist rant.

"All these years later, there are females going out protecting Bill Clinton from his horrific acts. I am about to pass out." (He says this a lot throughout the segment. I am frankly a little shocked that no one called a doctor for this man on the verge of passing out.)

"This is not about Bill Clinton. This is about the women who were eviscerating Monica Lewinsky, who for 18 years was quiet and, by the way, lived a life of shame and her entire existence reduced to a punch line," he continued. "And she stays quiet, shows a lot of dignity, a lot more dignity than people who preyed upon her and tried to turn her into a slut or a nut. A 22-year-old daughter, really? And now they're coming out kicking her in the face?"

Then he really brought it home about how terrible all these women are:

You women's rights ladies, you were sick in the '90s ... You're pathetic. If you have young daughters, you should be ashamed of yourselves ... I am so angry right now, I am shaking. I still can't believe the way he was treated in the 1990s ... And it was always the women ... And these people have the nerve to come out after defending him -- after defending him -- claiming to come out, wanting to support women, and protect women -- women's rights -- unless we're protecting a really, really powerful man who is on our side politically ... I'm going to pass out.

Really, this isn't even about his anger at Clinton. It is totally fine for Joe Scarborough to be angry at Clinton! He did lots of terrible things while in office. And while Lewinsky has called the affair with Clinton consensual, there are lots of important and uncomfortable questions that remain about the degree to which consent was present in Clinton's other affairs and sexual propositions. Scarborough is also well within his rights to be angry at the shamefully sexist treatment that Lewinsky has received over the last two decades. But he places the blame for these attacks on Lewinsky at the feet of "women's rights ladies" after going on a long, sexist rant about how ashamed all these women should feel when really all he meant was, "Andrea Peyser and Maureen Dowd are being ridiculous jerks about Monica Lewinsky."