"No more blaming others": Marc Maron on his family, his audience, and fictionalizing himself 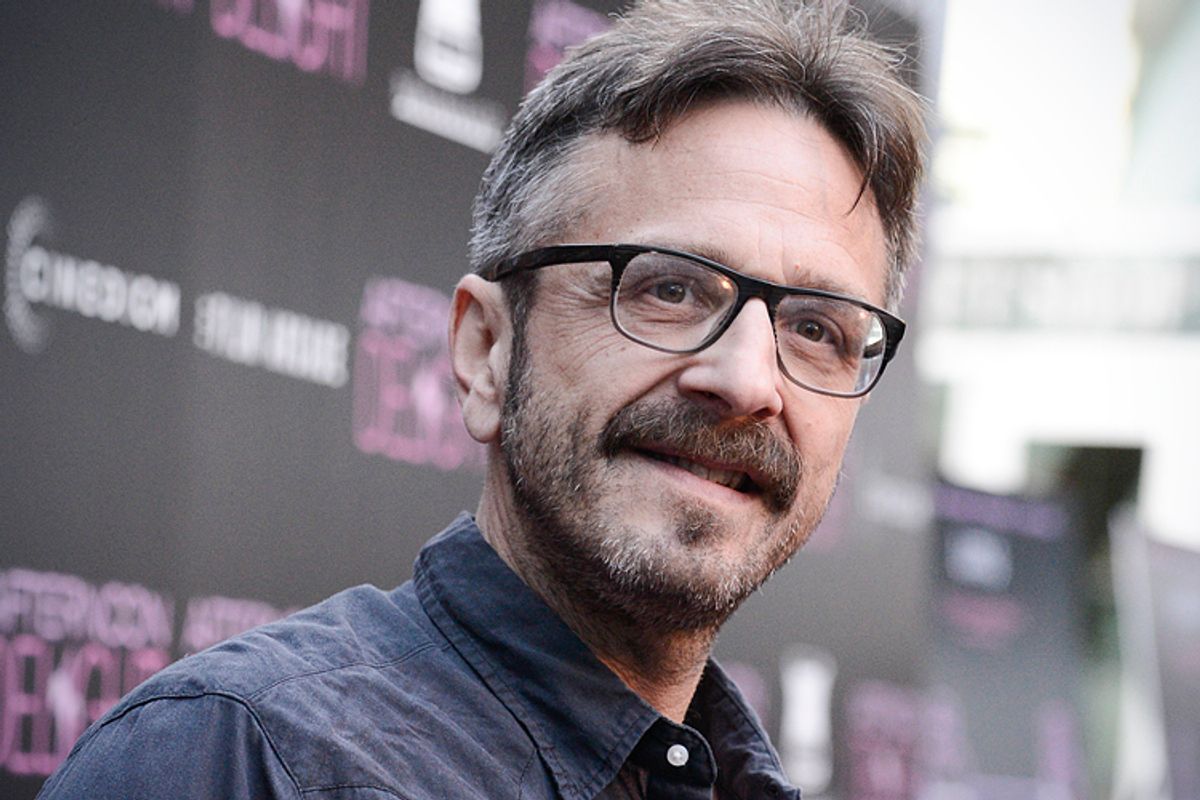 Season 2 of “Maron” premieres Thursday night on IFC. Salon talked to the stand-up stalwart and notoriously self-flagellating podcast guru about coping with the version of himself that now appears on the small screen. Despite his on-screen anxiousness, he is surprisingly mellow and practical. So many of the events and stories constructed around his character involve small injustices – both perpetrated by Maron and received by him – but in real life he seems firmly focused on the future of his brand and of his personal franchise.

A season into your show, how do you feel about the fictionalized version of yourself you're projecting?

It was something I was very conscious of moving into the second season. For the first season I had no idea what I was doing in that it was all a new experience for me to write television, to act on television, produce television. I really just had to show up with myself, willing to work with others, and do the best I could with what I had. Once we did get the pickup [for the second season], it was very much in the front of my mind, Who is this version of me? Is he specifically funny? What defines this character? Because I’m a fairly broad personality person. I have a lot of different colors to whatever the hell it is that I am. And I know I’m not a caricature of myself. And so when you’re doing television, there does come the question, How do I become more of a caricature of myself? How do we make that comedic character a little more defined?

So how do you?

I think we were able to do that through situations and through the kind of mildly aggravated, self-consumed tone, but obviously capable of some genuine vulnerability. A lot of it was revealed in the story breaking process and in the performance itself, because coming into this season I was a little more confident in the writing, and I was a little more confident in taking risks as a performer, and I think it sort of solved itself.

A lot of people know me through the podcast, and now a lot of people know me from the television show but never really listened to the podcast, or they might have just started listening to the podcast. I do know that people are gravitating toward the television show without having any real knowledge of me at all. For most people I’m an unknown entity. And that’s very promising and exciting that people are coming with no knowledge of me whatsoever now that it’s on Netflix, and are like, what the hell is this? This is great. Who is this guy? Where did he come from?

You seem to have a high level of sensitivity to how your audience sees you and feels about you. There’s that whole episode where you chase down the kid who has been writing negative comments about you on Twitter. So, as far as reception of the first season, did you do any kind of course-correction for Season 2?  Was there any kind of, I don’t like the way people are responding to this, let me tweak it a little?

There wasn’t that much. Some people liked some episodes more than others. But the wave of engagement that happened after the first season was put up in its entirety on Netflix was all very supportive. And I think the biggest concern for me going into the first season was [not] trivializing what I was doing because of Louie, or Curb, or because of anybody else who does single camera. There’s this compulsion on behalf of people to sort of compartmentalize – Oh, he’s just doing this. Oh, it’s just like that. But that went away very quickly. Because I think people realized that single-camera is just a format, and me and Louie and Larry and whoever else does it are very different people.

So how thin-skinned is the real Marc Maron, compared to the character?

Oh, it’s definitely real. I’m definitely over-sensitive, but what I’ve learned from doing the podcast is that I have to just keep that to myself in a lot of ways. Because if you’re trying to second guess how you’re being received, or what people are going to like, you vocalize that, or you honor that, then you’re denying them their experience. So, just because I may not be thrilled with the way an interview went because my emotional needs weren’t met in that hour, doesn’t mean that it’s not gonna be the greatest thing in the world for somebody who loves the person I’m talking to, because they’ve never heard them talk.

I remember watching Ray Romano do stand-up, and then watching his show, or watching Louie doing stand-up and then, eventually, watching his show and seeing pieces of their stand-up as the seeds for their initial seasons. Then came their second season and they stopped pulling as much from their backlog. You had a short first season, but have you exhausted those stories yet?

The thing about the podcast is that a lot of it isn’t stand-up. It’s me doing monologues that are not necessarily hammered out in front of an audience or picked apart and constructed for beats. Making them into stand-up material – making something that happens in my life or something I talk about improvisationally on the podcast into a stand-up routine, it takes months. So, is my life exhausted? I don’t know. I’ve really sort of had problems with that for a while, but every form they happen in, these kernels of real events, you find your truth in them and you find places to take them that they didn’t go before.The television show has to be seen as a fictionalization, and as a scripted story, and as its own medium.

So we were able, this season, to broaden that, to not be afraid to just go and fictionalize based on the character as opposed to pulling from an event. Right now, I’m trying to go do a new hour of stand-up; my life is definitely not depleted because I keep living it. So the fear of what you’re talking about is a little less but it’s still sort of there.

The way that Season 2 opens with you appearing on “Talking Dead” with Chris Hardwick is really phenomenal because it just cuts to someone unloading on you, and had I never seen this show, I’d be like: Why is this guy such an asshole, why does he deserve this?

Yeah, and I was glad to give Chris that opportunity. He’s not that kind of guy publicly. And him and I have always had our weird little tension, and he really stepped up. He really showed up to unload on me. That’s for sure.

In making “Maron,” do you think about the arc of your character, where he is ultimately going?

Definitely. What we knew going in was that this season was going to be me dealing with that first wave of things getting better. For the first time in my life, I seem to have a little traction and a little more opportunity and there’s the idea that I’m a little more successful, and how to handle that.

I think if you watch any of these episodes, they do stand alone, and that’s one of the benefits of shooting the way we’re shooting and having single camera, and doing IFC. Each of them exist on their own and do not necessarily suggest a before or after. I think if you can pull that off, that’s the best you can do in terms of getting away from this idea of honoring an arc.

In the new season, your family shows up in two of the four episodes I've seen. Is there a particular reason for that, or did you just want to build a strong ensemble around him?

My parents are very specific characters in my story and in my life, and they’re both uniquely fucked up. When we had the opportunity to figure out how to get them into my neighborhood and get them into my world as characters, we took it. We were able to use Sally [Kellerman] a little bit last year, and she just really loved playing my mother who is just a very specific character, and Judd [Hirsch] was great as my father, and we were just lucky to get him for the one episode.

The character of your brother appeared in the first season. I vaguely remember he took a phone call, and he seemed like a reasonable kind of guy, a little jaded, but still sort of domesticated and calm. In this season, he shows up, and he’s manic, and ready to throw his life out the window, and the change is sort of drastic. Is that part of the fictionalization we’re talking about, needing a character that fits that part?

No, no. That has sort of an emotionally realistic basis. My brother has three kids and his wife has four kids. In the first season I don’t know that he was that grounded. He was very distracted by the chaos in his home on that brief phone call. That character is rooted in possibility, and I think, given the emotional map of my mother and father, the character makes sense. I don’t believe that my brother would ever take as drastic an action in real life, but I can’t tell you that the thought isn’t there.

It feels, particularly with your family around in so many episodes, that "Maron" is blaming everyone for his own unhappiness. I’m just wondering, do you ever get tired of blaming the universe? Do you, at least, get tired of watching yourself blaming outside forces?

Well, I don’t know if I’ve ever looked at it like that. I guess there is that element. But the struggle to take responsibility for your problems when they are so clearly rooted in something much deeper – something that happened when you had no control over them – I think is a struggle a lot of people have. I think, in my mind, I’m more annoyed at the reality of it. I guess you’re right. But I think that at some point blaming, or the actual engagement of saying, You did this, and Can you answer for it, has got to be part of the evolution of growth. You’ve got to take a shot at that. Obviously they’re not going to be able to do anything about it.

That’s a sad realization as a grown-up: Whatever shortcomings your parents had as parents, the window for them to show up in that way is gone. That kid inside me is never going to get those needs met. I’ve got to just accept that and try to take care of that kid and get him up to speed with where we’re at now. It’s a difficult journey for a lot of people. But yes, I guess I am tired of blaming. And hopefully I will stop that.