Why oil-by-rail is an explosive disaster waiting to happen

A recent spate of fiery train accidents all have one thing in common: highly volatile cargo from North Dakota 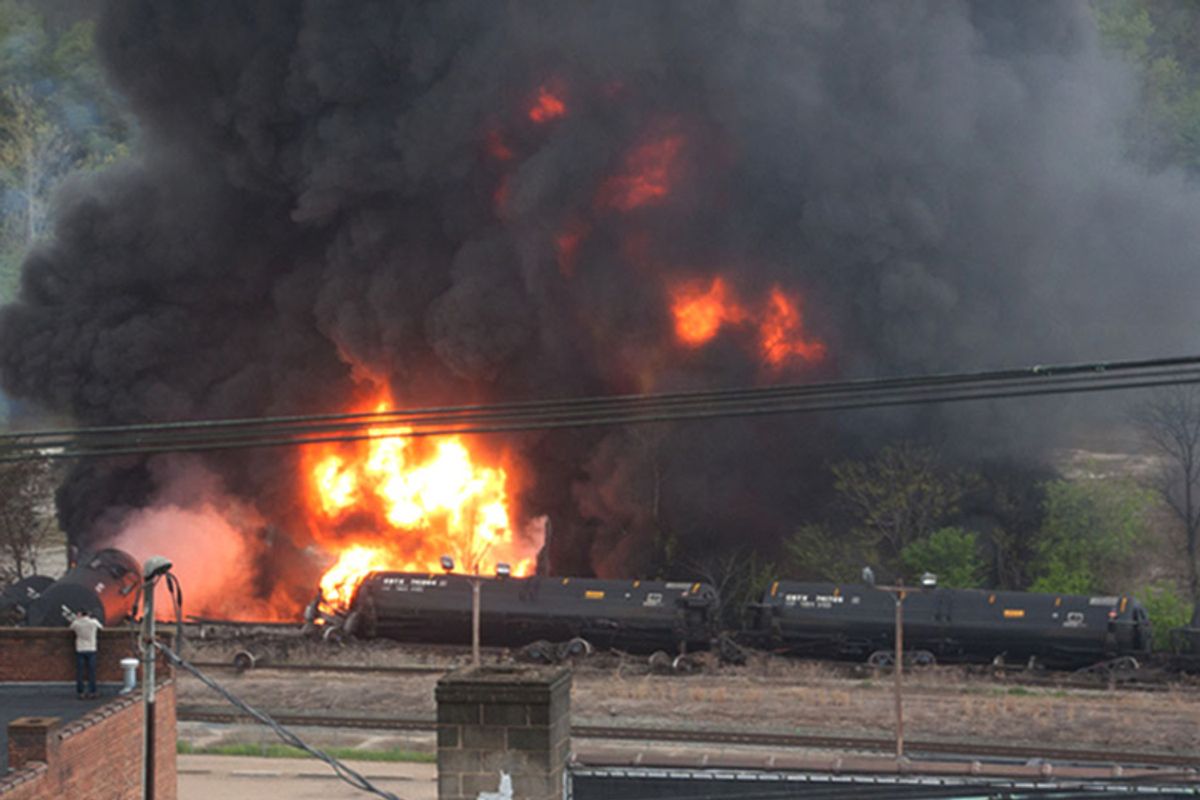 In case the near continuous reports of fiery, deadly oil train accidents hasn't been enough to convince you, Earth Island Journal is out with a startling investigative piece on North Dakota's oil boom and the dire need for regulations governing that oil's transport by rail.

The Bakken oil fields in North Dakota are producing over a million barrels of crude oil a day, more than 60 percent of which is shipped by rail. All that greenhouse gas-emitting fossil fuel is bad enough; that more oil spilled in rail accidents last year than the past 35 years combined is also no small thing. But the particular chemical composition of Bakken oil lends an extra weight to these concerns: according to the Pipeline and Hazardous Materials Safety Administration, it may be more flammable and explosive than traditional crude.

The industry denies that there's anything special about Bakken crude, but Scott Smith, a researcher at the nonprofit group Water Defense, has evidence to the contrary. From Earth Island Journal:

Smith now has conducted detailed analyses of Bakken crude from the three accident sites in Quebec, North Dakota, and Alabama, along with baseline data. He says he is the only outside expert to have done so and has shared those lab results with Earth Island Journal. Even government agencies – including the US Department of Transportation (DOT), which is tasked with regulating oil by rail transport – have been largely kept in the dark about the qualities that make Bakken crude so volatile as well as how it varies throughout the formation. “Despite the energy industry making assurances to DOT more than two months ago, we still lack data we requested and that energy stakeholders agreed to produce,” a Department of Transportation spokesperson told Reuters in March.

All the samples collected and tested by Smith share the same high levels of VOCs [volatile organic compounds] and alkane gases in what Smith says are exceptional combinations. According to Smith, 30 to 40 percent of Bakken crude is made up of toxic and explosive gases. Typically these gases are separated out of the crude oil before transport. A recent report by the Pulitzer Prize-winning website Inside Climate News speculates that because of the whirlwind pace of production in North Dakota and the absence of processing facilities, volatile gases like propane are not being removed at the wellhead.

There’s still a lot we don’t know about Bakken crude, Smith says. This includes the presence of metals, radioactive materials, and gases. Because of the varying depths of the Bakken formation, two wells a mile apart can produce crude oil with very different characteristics. This makes sampling and testing especially tricky. It also makes industry cooperation essential.

Smith still has vials of Bakken crude that he pumped out of the ground nearly a year ago. “When it gets above 80 degrees and you shake them,” he says, “it bends the top of the container. Any form of static electricity will ignite this stuff and blow it up.”

Independent reviews corroborate Smith’s findings. Chemists with California’s Office of Spill Prevention and Response examined Smith’s samples and concluded that the Bakken crude “resembles a typical crude oil that has been mixed with diesel or a diesel/gasoline mix. … Obviously, flammability and volatility are greater concerns with Bakken than with ‘typical’ heavier crudes.” In February The Wall Street Journal, based on its own analysis of data collected by the Capline Pipeline in Louisiana, reported that oil coming from the Bakken has significantly more combustible gases and a higher vapor pressure than oil from other formations. In early March, Canada’s Transportation Safety Board (TSB) issued its own findings from oil samples taken from the nine tank cars that did not derail in Lac-Mégantic. While the TSB does not contend, as Smith does, that the Bakken oil is significantly different from other light sweet crudes, the agency also found that oil coming out of the Bakken has a very low flashpoint – which means that it ignites easily or at a relatively low temperature – a level more similar to unleaded gasoline. When the rail cars went off the track in Lac-Mégantic, sending up sparks and static charges, it didn’t take much to set off explosions. “All of the conditions required for ignition to occur were present,” the TSB report concluded.

It's a frightening warning worth repeating: without heightened safety standards and federal oversight, the many cities and communities through which trains carting Bakken crude pass are helpless in the face of a potential disaster. "I live in fear of waking up to a bunch of text messages and emails because there’s been a 100-car explosion in Chicago and 300,000 people are vaporized,” Smith said. “Unfortunately, that is a very real possibility if something’s not done.”