Have we hit peak food truck? 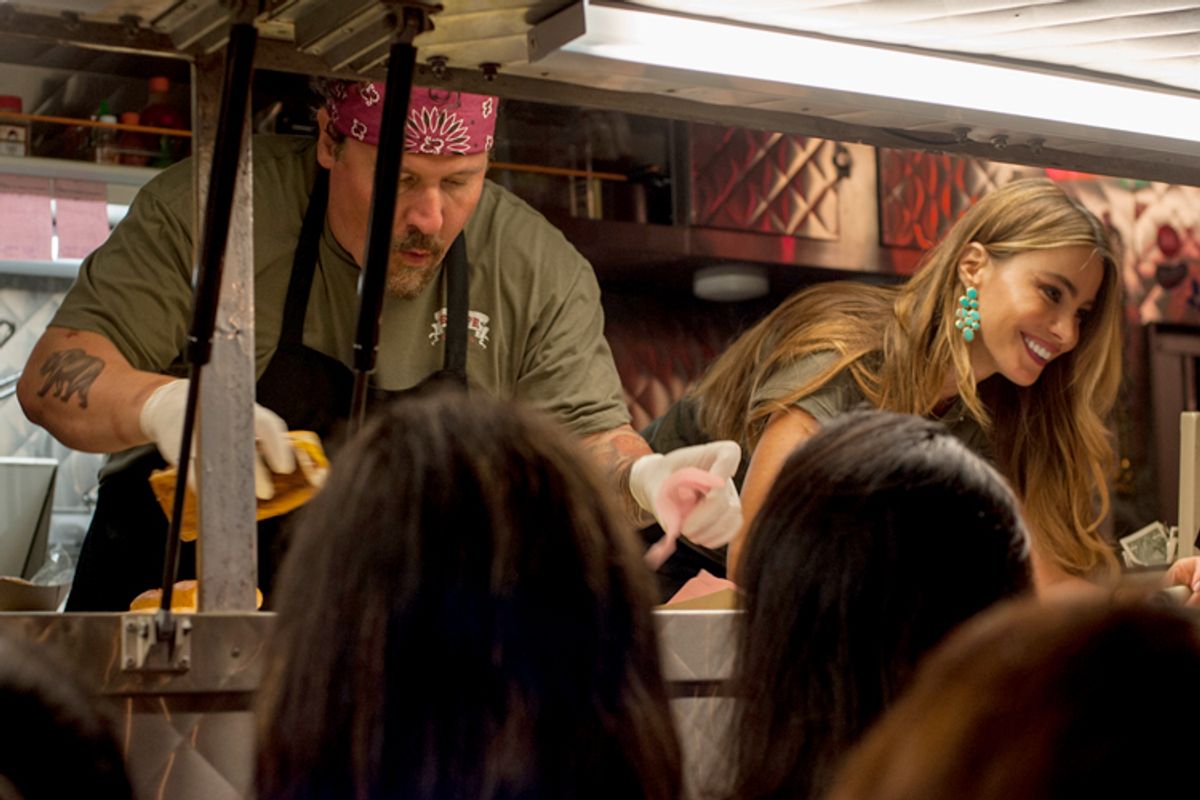 The recent news that Royal Caribbean had installed a "food truck" on one of its ships was at once paradoxical -- the truck, such as it is, is not going to be mobile -- and perfect. If the least hip enterprise in the world, one so terminally uncool that its associations among a certain set of the general public is a mocking David Foster Wallace essay, has discovered food trucks, was there anyone on earth who hadn't heard of them?

Apparently not Hollywood, where food trucks are novel enough to bolster a would-be summer hit. "Chef," Jon Favreau's star vehicle and directorial follow-up to "Iron Man 2" and "Cowboys & Aliens," is a low-fi film about a star gourmand whose life changes when he quits the restaurant where he's been making basic Gallic-inflected classics and takes a food truck on the road to America's hippest enclaves (Austin's South Congress district features heavily). His truck serves simple Cuban food -- the movie fetishizes it. Close-ups of bread being brushed with butter and spread with mustard abound. Yum! But, also, so? Such food could be consumed about anywhere in the cities -- Austin, Miami, Los Angeles. It's the truck that makes it magic -- at least, on-screen.

There's a lot that's fantastical about "Chef," not least that the lumbering Favreau has romantic history with Scarlett Johansson and Sofia Vergara. But what's strangest is the notion that a food truck would incite a national frenzy as it makes its way across the country. Favreau's on-screen son (played by the terminally cute Emjay Anthony) manages the truck's social media, "tweeting out" its forthcoming locations and photos of its cuisine. It's a story of what success looks like as framed through a rudimentary understanding of hipness: Social media is a happening thing, and so too is food served from a truck. The dining public will race to try whatever is new, even if it's served in a manner that's both somewhat inconvenient and so tired it's almost asleep.

What was the food truck? It's hardly a new phenomenon -- they've been choking lanes in pedestrian thoroughfares for years -- but some combination of a burgeoning foodie culture and an endless-recession emphasis on thrift have brought them to the fore as, effectively, restaurants. Prior to their reinvention as a mobile, gustatory signifier for that which is cool, they were the most efficient way to distribute simple food out there. That the trucks' most ardent fans can track trucks' progress online to ensure they're first in line is a fairly recent invention for a vehicle that once ensured simply that time-strapped workers could get food as close as the curb.

There's a twee effect at work here; food trucks are able to charge a markup or get placed in novel locations simply by dint of their veneer of hipness.  Something utilitarian, a mobile restaurant able to serve a varied clientele quickly and economically, has been digested as kitschy fun. A sausage-and-hot-dog station on a cruise ship would surely be business-as-usual, if unseasonably heavy cuisine, but throw in a truck and there's an added layer of cool.

The most au courant element of "Chef" is the equivalence it draws between high cuisine and the most simple kind of cooking. A chef, frustrated with the strictures of contemporary restaurant scene, breaks free and serves elegantly prepared, simple food to his hungry public. The duality the movie sets up -- the notion that only through taking a food truck on the road can one truly be in tune with what the people want to eat -- is fairly ridiculous. After all, "Chef" ends with the food-truck purveyor returning home, after having cruised around in his truck, and picking up his mail; on top of the stack is a copy of David Chang's magazine Lucky Peach. Chang is a chef whose catholic approach to tasty food has started a real evolution. He has a bricks-and-mortar restaurant informed by street culture, a recipe for success that second-generation "food trucks" are now aping.

By contrast, there's nothing authentic about eating Cuban food prepared by a white man in a truck he refurbished using his earnings as a restaurant chef. But "Chef" thinks that's as real as it gets. Talk about a Hollywood ending.