Nintendo's anti-gay cop-out: Why its demented same-sex ban is no game

Video game giant says it's just being family-friendly. Here's what its policy against LGBT couples is really about 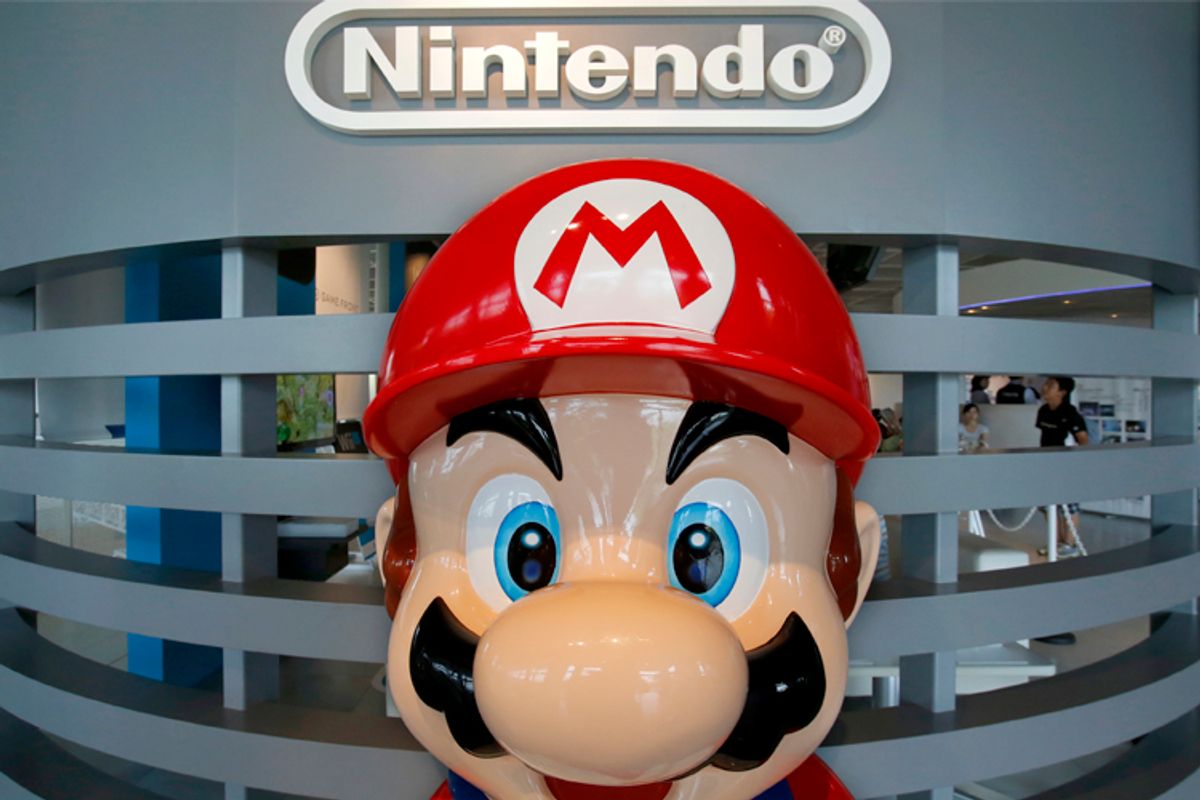 Mario and Luigi won’t be hitting the gay club any time soon. On Tuesday, Nintendo announced it would not give in to pressure from members of the gaming community urging it to allow characters on "Tomodachi Life" — a life-simulation video game — to engage in romantic activities with characters of the same sex. Over the past month, queer gamers have waged a social-media campaign under the hashtag #Miiquality, a portmanteau of “Mii” (characters in "Tomodachi Life" are called Miis) and “equality.”

"Nintendo never intended to make any form of social commentary with the launch of 'Tomodachi Life,''’ the company said in a statement. "The relationship options in the game represent a playful alternate world rather than a real-life simulation."

Of course, the exclusion of gays and lesbians is in fact political, and a form of social commentary. Heterosexuality is normal, family-friendly, it says; homosexuality is not. That Nintendo can think its decision is apolitical is a prime example of what social theorists call “erasure”: The dominant group’s views and identities are taken as standard and value-neutral while minority viewpoints are “marked.” But in reality, heterosexuality is no less political than homosexuality.

"When you see queer people in the media, it sends two messages: For one, you are visible; for another, people like you are worth mentioning," says Todd Harper, a postdoctoral researcher at MIT's Game Lab who identifies as gay and studies representations of sexuality in video games. "That double-hit of 'hey, I'm not a mistake; I actually belong in the world' is huge and important."

Rather than represent an “alternate world,” "Tomodachi Life’s" compulsory heterosexuality all too closely mirrors the prejudice in our own. "It's kind of like being queer," says Adrienne Shaw, an assistant professor at Temple University’s Department of Media Studies and co-chair of the International Communication Association’s GLBT Studies Special Interest Group. "You're forced to navigate a world that you can't tinker with, that you have to fight back against." That’s hardly “playful.”

The omission of gays and lesbians is especially glaring in life-simulation games. Players may not necessarily be looking for games that represent them, but when a gay player is forced to marry someone of the other sex, it’s hard not to feel left out. “Regardless of what type of representation, life-simulation games are where people notice exclusion the most,” Shaw says. “In games where there are not relationships, people don't notice it as much.”

Nintendo’s implicit endorsement of prejudice against gays and lesbians is especially harmful for LGBT kids. While some social conservatives may argue that the Mushroom Kingdom is no place to bring up issues of sexuality — as if straight relationships were any less about sex and sexuality than gay ones — the truth is that kids, queer and not, have used video games to safely explore and question their identities since the dawn of arcade games in the 1970s. "Games were always presenting me with white, male power fantasies," Harper says. "But whenever offered, I always selected female characters—I actively fought people to be the princess."

Kids who haven’t hit puberty may be too young to identify as gay, but being presented with the option of pairing characters with members of the same sex sends a powerful signal that leaves a lasting impression. "A lot of the research suggests that being sheltered from seeing [alternate] representations of gender and sexuality early on makes it harder to come to grips with one’s identity later," Shaw says. And as Samantha Allen, a fellow at Emory University's Department of Women's Gender, and Sexuality Studies, at Polygon points out, “Alternate realities should function as safe havens from the bigotry that defines our own reality, not as a way of pretending entire populations of people don't exist at all.”

Since rocking the gaming world with "Super Mario Brothers" in 1983 — Nintendo started out making playing cards in the late 1800s — the company has strictly hewn to mainstream views in the production of its games, and also limited representations of violence. In the 1980s and 1990s, it also heavily censored games produced by independent developers, which had to meet strict guidelines — no drugs, cigarettes, booze, blood or profanity. The original manual for "Super Mario Bros. 2" included a character named Birdo, which the Nintendo Entertainment System manual explained believed himself to be a woman and preferred to be called Birdetta. The line was excised by the company before its release. In 1992, Nintendo also forced game-maker Enix to remove a gay bar from "Dragon Warrior III." Nintendo relaxed its prohibition on cross-dressing characters in 1992, and by the late 1990s all but abandoned its content-censorship policies. But games produced by the company itself must still meet its strict content guidelines.

Other video-game producers, however, have been far more forward-thinking, and representations of queer characters have shot up dramatically since the early 2000s, coinciding with the meteoric rise in public support for gay marriage. Game-maker BioWare offers same-sex relationships in "Mass Effect" and "Dragon Age." Released in 2004 and produced by Entertainment Arts — which last year hosted a panel on combatting anti-gay themes in video games that included leaders from the Human Rights Campaign, the country’s largest gay-rights advocacy organization — "The Sims 2" allowed same-sex pairings. In the latest edition of the game, the entire town becomes gay-friendly after characters engage in several same-sex relationships (one assumes this is to make sure it’s not just a phase).

It has been the rise of do-it-yourself software like Twine and Stencyl in the last few years that has led to the explosion of queer characters in video games. "There's a lot going on in the indie space," Harper says. "You're able to produce games that 10 years ago you couldn't make because of the available tools, but now there's a rising tide of queer developers making small-scale personal games."

But while the democratization of the game-producing industry has meant there are more games with queer characters and more life-simulation games where same-sex relationships are an option, indie games simply don’t have the reach or cultural cachet that Nintendo does. Allowing the characters on "Tomodachi Life" to flirt and have relationships with members of the same sex would be powerfully affirming to all the boys fighting to be the princess.