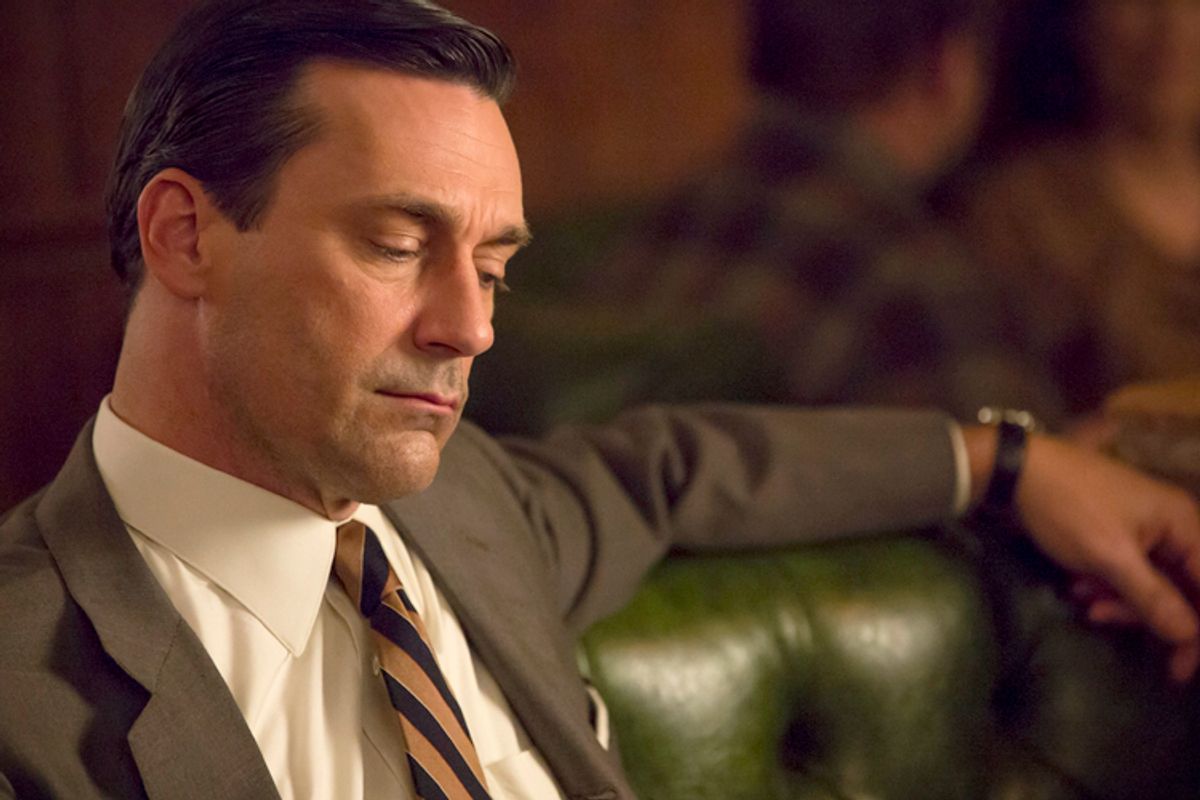 The chorus of recappers rehashing last week’s episode of “Mad Men” are unanimous: “The Monolith” -- in which the admen gathered in awe around a chunky, alien-looking computer -- was a glaringly obvious homage to Kubrick, whether it be the slab of IBM technology stabbing skyward and recalling “2001: A Space Odyssey” or the more obscured reference to Lloyd from “The Shining.” The latter lends itself to the increasingly popular theory that Don Draper will not make it out of advertising and/or alcoholism alive. But the “2001” stuff has dominated the conversation, with everyone harping on the brand-new computer as the harbinger of man’s/Don’s/creativity’s obsolescence.

"Kubrick's post–Dr. Strangelove work often concerned itself with conditioning, evolution, and the threat of specieswide extinction, all of which are important in this hour of the show." -- Matt Zoller Seitz, Vulture

Several writers criticized the episode for being a bit too heavy-handed in its use of Kubrick-inspired imagery to suggest ... well, to suggest what, exactly? I realize it is universally accepted that the mysterious monolith in the "Dawn of Man" chapter of "2001" triggered something in the apes that caused them to begin using tools. From that moment on, technology's place in our evolution was irrevocable, leading inevitably to mankind's obsolescence -- except that's not necessarily what happened. "2001's" conclusion is ambiguous, and what it says about man's next step is open to interpretation, much in the same way that "Mad Men," for all its fussing over Don Draper's potential and potential for self-destruction, has given no reliable indication as to his ultimate fate.

Like I said, I was fascinated by "2001's" monolith, not because of the what it accomplished, but because of the how. The great question for me has always been how a big, black, unfamiliar object where there was none before sparks an underdeveloped consciousness to envision the bone it had seen a thousand times before as something brand-new. The process seems as much like alchemy as it does science. Similarly, I think the introduction of the computer into Sterling Cooper & Partners -- and, by extension, Don Draper's life -- suggests the possibility of evolution as much as it does some inescapable demise. After all, a lot happened in between the day the monkeys saw the brick and the moment HAL decided the monkeys were beside the point.

Don sees his monolith and, after some investigation, becomes inspired. He is shot down in that effort by a lesser mind, but the seeds of progress have already been sowed. When, at the end of the episode, we see Don exuberantly typing away -- doing the work, as Freddy Rumsen advised -- it is scut work for sure. But he may need to brush up with his old tools before experimenting with new ones. The new computer is ugly and unsettling, but transition often is -- especially when you don't know what you're transitioning into. The many Kubrick references in "The Monolith" are heavy and slablike, but I think that is its own form of misdirection. For those who are well versed in "2001," "Mad Men" seems all the more familiar now, its ends mapped out. But the truth is we know just as little about Don's future as we did about his past when the show began so many seasons ago. The possible outcomes are more akin to how Lloyd described the computing power of SC&P's newest purchase: "This machine is intimidating because it contains infinite quantities of information."