My husband's surgery signaled the end of possibility, but I realized it was the beginning of something else 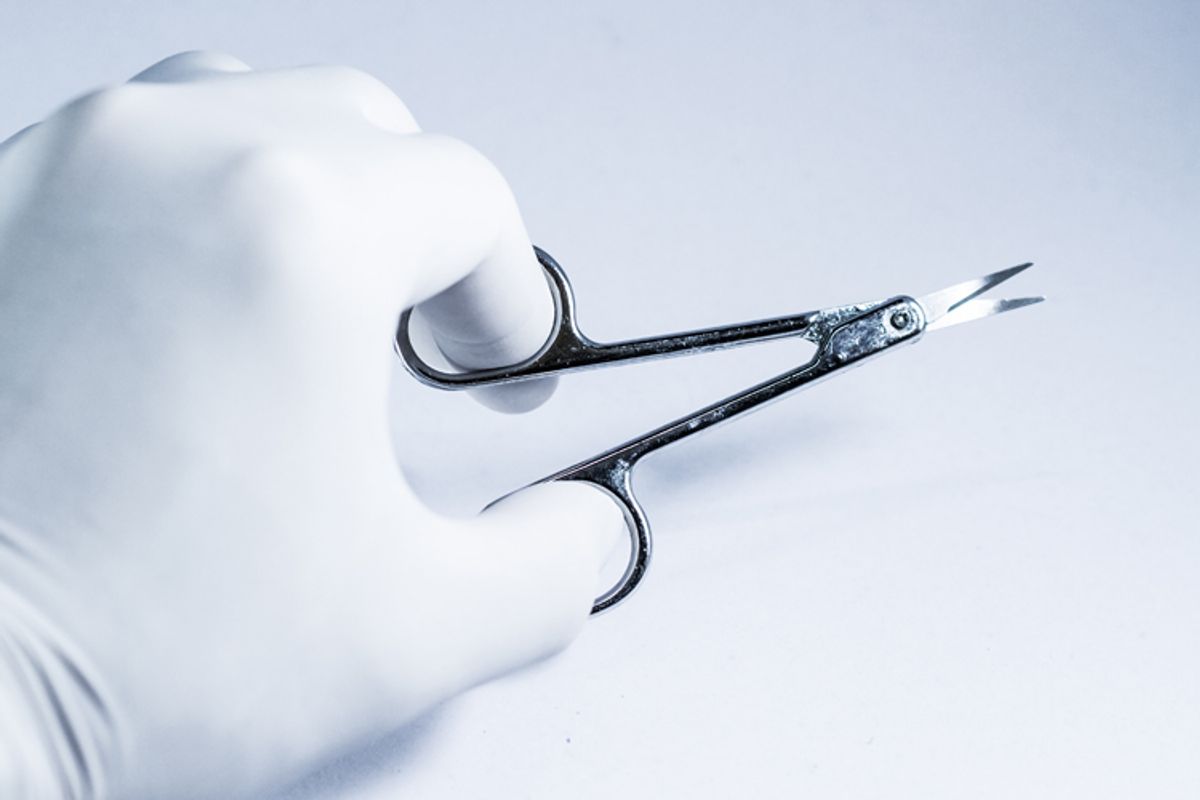 My husband’s decision to have his vas deferens severed was motivated by money.

One night, after the kids were in bed and we’d finished watching “The Walking Dead,” I stood at the sink doing leftover dinner dishes as Mark was getting ready to walk the dog. He zipped his coat, clicked on her leash, and said, “Looks like we’ll be meeting our insurance deductible this year. I thought I would get a vasectomy.”

“Oh?” was all I could think to say, squeezing more soap onto the sponge.

The following night, he tells me he has been reading up on the procedure. Unlike me, Mark is a taskmaster and when he decides to take care of something, he’s on it. No surprise, the online community chats a lot about vasectomies. He reads to me from a message board:

“After the fourth kid, I was ready with Google and a paring knife.”

Mark and I both laugh. Nervously.

This subject hasn’t come up in several years. Our daughter is 11 and our son is 8. We know for certain we do not want to have more children. We knew this a long time ago, even before our son was born. But when our kids were still young, and we somewhat younger, while Mark told me he was ready for a vasectomy, I was not. The end of possibility was unnerving.

But now I cannot picture being pregnant again. Or deciding to try to become pregnant again. Nor can I picture a baby in our midst: diapers, pureed food, interrupted sleep.

We are comfortably into territory where babies are not us.

This territory is entered through a door that swings closed slowly and quietly until one day there is a click. A lone sippy cup and melamine plate sit on a high shelf for visiting tots. Wooden blocks and plastic animals have been replaced by intricate Lego creations and requests for PG-13 movies. Some favorite items — mostly tiny clothes — are packed away and are not intended to see the light of day until perhaps we are grandparents.

The next night in bed, Mark closes his book and tells me he has a consultation with a urologist his internist recommended and whom he read good things about online. This is moving fast. Even though I have no objections, it feels strange that we have not actually had a substantive conversation about it. If I were to open The Book on marriage, wouldn’t this be listed as a decision made as a couple? Does it mean something that we aren’t making it as one?

I mention something of the kind to Mark. “I feel like you’re leaving me out of this entirely, and you may as well be heading off to get your teeth whitened.”

“There’s not much for us to talk about,” he tells me, reaching for his bedside light. “I just know that I don’t want to get anyone pregnant again."

Things do not go well after this.

I snap off my light, with too much vigor, bumping the lampshade. It is still vibrating as I turn my back to him in the dark.

If there are peaks and valleys to even a healthy marriage, lately Mark and I have been in a canyon, each of us taking a turn as the ass on the way down. It’s happened before in the last 10 of our 19 years together, and we have always emerged. I have learned not to worry — or not worry too much. But I’ve been waiting noticeably longer this time, still anticipating the crossing over when I know the love between us is being generated in the present, not riding the coattails of the past, when our life together was far simpler. A one-bedroom apartment, new episodes of the original “Law & Order,” a dog we walked together every night. We now share a busy life with our kids in a house, and the dog we raised from a puppy died last year at 14.

I still cry for him, and I have come to know those tears are both for the precious animal we lost and for those simpler times he helped us remember.

Mark meets with the doctor and all systems are go. It is time to schedule. We choose a Friday morning a few weeks off. The kids will be in school, and he’ll have the weekend to recover. When I go to write it on the kitchen calendar, I am reminded we have tickets the following day for my friend Natalya’s daughter’s ballet performance. I tell Mark.

“I’m not switching my vasectomy to make sure I can go to a ballet. You and the kids will go without me if I’m not up to it.”

“No pun intended?” I say and write “V Day” on the calendar in red pen.

The morning of the procedure, we get ready to go as soon as both kids are off to school. Mark brings a small tote bag for his belongings. I can tell he is at least a little anxious, as when we get to the office park, he pulls in front of the wrong building and is confused as to where we are supposed to be. This is 375. We need to be around the corner at 475.

When we approach the reception desk, a cheerful young woman says, “Sign in here and let me get you a menu.”

She slides across the desk a narrow piece of paper that reminds me of the menus once given on transatlantic flights. No beef or chicken, but they want to find out what Mark wants for breakfast after his vasectomy. Coffee or tea? Juice: cranberry, orange, apple? Toast: butter, jam, dry?

“You’d think they’d ask how you like your eggs in the morning,” I crack. The receptionist looks blank. Mark smiles at me.

A nurse leads us into a large pre-op room divided by curtains. She pulls one around us and takes Mark’s blood pressure, then hands him a gown and hospital socks.

“Opening in the front. You can keep your shirt on. When you’re ready, you’ll need to give us a urine sample.”

Mark changes and drops his wallet, phone and keys into the tote bag and hands it to me. While I wait, another nurse comes in and scratches at a clipboard. She turns to me and points at my lap.

“Is his scrotal support in that bag?”

Once again, Mark has been short on details about today.

I reach into the bag and feel something soft and strappy at the bottom. I lift out the jock, as if extracting a key piece of crime scene evidence, and hand it over. Mark returns and I am told to wait in the reception area. We kiss goodbye. Less than an hour and the latest news from People magazine later, I am escorted back in.

“Hellooo!” Mark slurs, and with an enthusiasm I am not used to receiving from him upon entering a room. He is sitting in a chair.

“Hey there, hon, you doing OK?” I ask, sitting down next to him.

Apparently, he has lost his ability to pronounce the letter R along with his ability to inseminate. He flashes me a peculiar smile that shows many more of his teeth than usual.

“The doctor told me your sedative still hasn’t worn off,” I tell him.

“I’m waiting for my toast!” he announces, elated. He then shakes his head and flaps his lips, like when one imitates a horse. “I ordered it with jam. They gave me a sedative, you know.”

“I know. Do you know if they put your jock on already? Or do we still need to do that?”

“That’s a good question,” he says, still slurring. “I don’t remember them doing it.” He shakes his face again, then looks at me intently and whispers, “Should we check?”

I lean forward as Mark, peering down at his lap with the look of a mischievous child, eyes overly focused, slowly slides his hospital gown up his thighs. Suddenly, we see the bottom of the jock. It’s bulging more than expected because of the gauze bandage inside.

“Guess they put it on for me.”

We look up and lock eyes. Then we giggle. Giggling is about the only option when realizing strangers have dressed you in a jock strap and you have no memory of it.

In this moment I see us from above, two people who know each other so well it’s oddly natural to be huddled behind a curtain at a surgi-center, looking together to confirm the presence of scrotal support. This is intimacy. This is a shared life. As simple as it is complicated. So what that one of us is loopy on a sedative. The space between us fills with sweetness and humor and a delight in the uncanny, the very things that drew us to each other almost two decades ago. They’re still here, even when we throw things on top.

Everything beyond the curtain is held at a distance. I see only a man in his too-short hospital gown and skid-resistant socks, eagerly awaiting toast and jam, and feel for him an exquisite love.

Mark has a remarkably smooth recovery. Having his testicles incised seems to hinder him in no notable way. He does not fill the prescription for Percocet and takes only Tylenol. He works from his laptop the remainder of the day. The next morning, while the kids and I are still in our pajamas, he picks up bagels and walks the dog. (Our second dog.) He will not have to miss the ballet.

Later, we all get into the car and Mark and I are giggling again. From the back seat, the kids want in on the joke. But how to explain? We are off to see, more fitting than we had yet realized: “The Nutcracker.”

We’ve been laughing together a lot lately. We’ve been holding hands again when we watch TV. Mysteriously — as the crossing over often occurs — the vasectomy has airlifted us out of the canyon. I always love the view from above. A month from now Mark will submit a sperm sample to a lab and we’ll cross our fingers he can no longer get anyone pregnant.

We are excited by the possibilities.