"Seducing you with their senses:" Jon Favreau on the cult of the chef

Salon spoke to Favreau about DIY filmmaking, the perfect meal and why ladies love a man who can cook 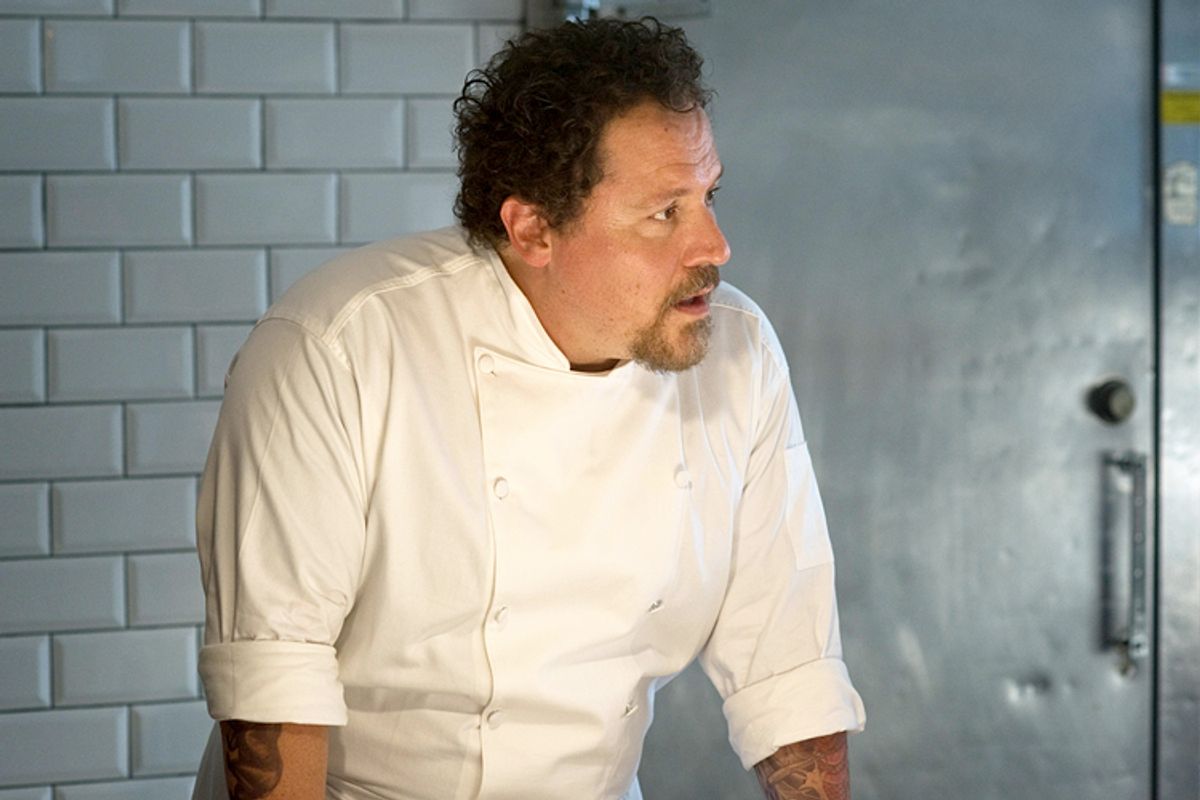 The conversation about the golden age of television and the death of the moviegoing experience already seems tired, but there’s something very interesting about “Iron Man’s" Jon Favreau going the DIY route. This is the first film he’s done with a limited TV ad campaign, and the project, “Chef,” has been promoted almost exclusively on social media. The film was written, directed and stars Favreau, a hot-shot chef who has a public meltdown and hits the road in a food truck with his emotionally neglected son and loyal sidekick, hilariously brought to life by John Leguizamo. While the film may be quiet compared to the blockbusters Favreau has come to be known for producing, it fully inhabits its chosen world — and that mildly sardonic but warm Favreau charm shines through.

So what inspired “Chef”?

Well, it wasn’t the food truck boom, and the food truck thing isn’t fresh now. It was interesting as I worked with Roi Choi, who was part of the first wave back in ’09, and he has a very different story. His story is that he got a taco truck, got on Twitter, came up with a menu and it just kind of exploded. This is different, and the food truck thing has already laid its tracks in the snow. It’s not a revelatory thing but a path for chefs who don’t want to raise the capital for a magazine and don’t want to be told what to do.

For “Chef,” it was more the human aspects, the father and son dynamic, that appealed to you?

Yeah, and the culinary world. I loved the pride of a guy who would never set foot in a food truck, who came from a French training background, and then have him just completely implode and start again from the most basic roots, and end up reconnecting with his kid.

The film brought back fond memories from a show I loved of yours: “Dinner for Five.” Are you the happiest when you’re post-meal, cigar in hand, enjoying good company?

I like the actual eating of the meal, maybe more than the afterglow, and I haven’t had a cigar in quite some time. I just haven’t because you have to be outdoors and I’ve got kids now.

You don’t want to be that dad.

It was more a holdover from the "Swingers" days, when we were trying to be a little older than we were.

Yeah, a bunch of Rat Pack-y 20-year-olds. There was a little ironic take on scotch and cigar. Now I’m an old man. Now when I have a scotch and cigar it’s not ironic anymore.

“Chef” is ultimately about rekindling passion, and working for your own muse. I have to assume that working on huge sets, with millions of dollars being thrown around, is exhausting.

It’s more trading your challenges for a different set of challenges, and these were very familiar, nostalgically older appealing challenges. Having a month to shoot a movie without a lot of dough, but having complete creative freedom, and having the entire country be your backdrop, is a lot different than having to be a diplomat, with the politics of studio filmmaking. It’s not like I feel encumbered by the resources. I love playing with visual effects and I love that toy box. But, part and parcel, with it comes responsibility to make that money back, and there’s a lot of oversight and creative input that comes along with it.

I’ve always been interested in your choices and sensibilities. There’s a darkness and a light. “Very Bad Things,” for instance, was very dark.

I liked it. That was Peter Berg’s first film, and I was purely in service of what he was doing. It’s a much darker film than anything I would ever come up with. But I was happy to be a part of it. It’s a little nihilistic and dark, and I like my films to have a bit of a hopeful resolution. There can be a lot of cringe-worthy moments, and there can be sequences that are painful or difficult, and not everything should come easy to the leads, but I do like the overall theme to be one of hope.

Speaking of cringe-worthy, it’s like when your character keeps leaving voice messages way past the point of embarrassment in “Swingers.”

Yeah! Technology tortured him. That was pre-cellphone, but if you look at “Chef,” Twitter and YouTube serve a similar function.

Social media plays both ways in “Chef.” It captures the memory, but also exploits the meltdown. Do you have a conflicted relationship with social media?

I was an early adopter of Twitter. I have 1.7 million followers now, and I’ve seen a lot of people come and go, who sign up and then overshare and delete their accounts. So, I’ve always had a healthy respect for social media, and I don’t really get involved until I’ve observed for a while. The rules are pretty simple, and the big thing is it’s going to amplify whatever experience you’re having. If you’re having a rough run, stay away from your account a while. If things are going well, celebrate and share it with people.

You should never get goaded into responding to something, because any time you engage with someone who is being negative, you’re just throwing gasoline on the fire. I’ve always had a healthy relationship with it because it allows the people to have access to what’s happening with me on any given project or in my life, and I think it allows them to understand what I am and what I do better. But, I never read more into it than what I would read off a bathroom wall. The character I play in “Chef” takes everything to heart. He’s new to social media and the Internet, and once you start Googling yourself or searching message boards, or reading on Yelp what people have to say about your food, you’re entering a dark tunnel that does not have light at the end of it.

You had [famous chef] Roy Choi assist on the film …

Yeah, he ended up being co-producer.

How savvy are you in the kitchen?

Thanks to Roy, I’m pretty good. I started off being comfortable and could put a meal together, but I was by no stretch someone with culinary training. When he agreed to take on the project, he sent me off to culinary school for an accelerated program, one-on-one, 6 a.m. all day, learning all the French technique. After I was done with that, then he had me working in some of his various food trucks for several months until I could actually work the line. I wouldn’t say I’m a chef, or that I could go on a show and compete. I don’t have that skill set. But I am technically pretty strong, and I’d be helpful to have around the kitchen and can work a line for a dinner service.

Some of the prep scenes and menu planning, feel sort of — sexual. Do you agree?

Your character gets Scarlett Johansson in the movie.

[Laughs]. While a bit exaggerated for the sake of the film and to show what a great cook he is, it’s not that far off from what I’ve witnessed.

Efficient chefs punch above their weight class. Stand-up comics, you know, anybody who has success in presenting a creative vision. Anybody who is exceptional as far as talent goes tends to be more attractive to the opposite sex, regardless of how they look on the surface. It’s probably most similar to a musician. A musician is tapping subconsciously into desires, and is seducing you with your senses. With food, you’re just playing into a different group of senses, but it’s still a very emotional, primal connection.

Now we’re approaching the 20th anniversary of “Swingers.” Does that film still feel to you like a career highlight?

I think “Swingers” was the most significant one. It wasn’t the most commercially successful film by any stretch, and it only made about $5 million. But it put me on the map, and most importantly, it established a tone for my work that even “Iron Man” borrows from in many ways. It’s my sense of humor, which is somewhat dry, and there’s a heartfelt aspect to it. But there’s a rhythm to it, a naturalism and a style to it, hopefully.

The perfect setting is a chef’s table, in the kitchen of a restaurant, where the front of the house is bustling, and in the kitchen, there’s all the craziness of the service going on. You see the chefs, cooks and the line just humming like a machine, and I get to have the dining experience with the chef at a chef’s table. To me, that’s about as magical as it gets.