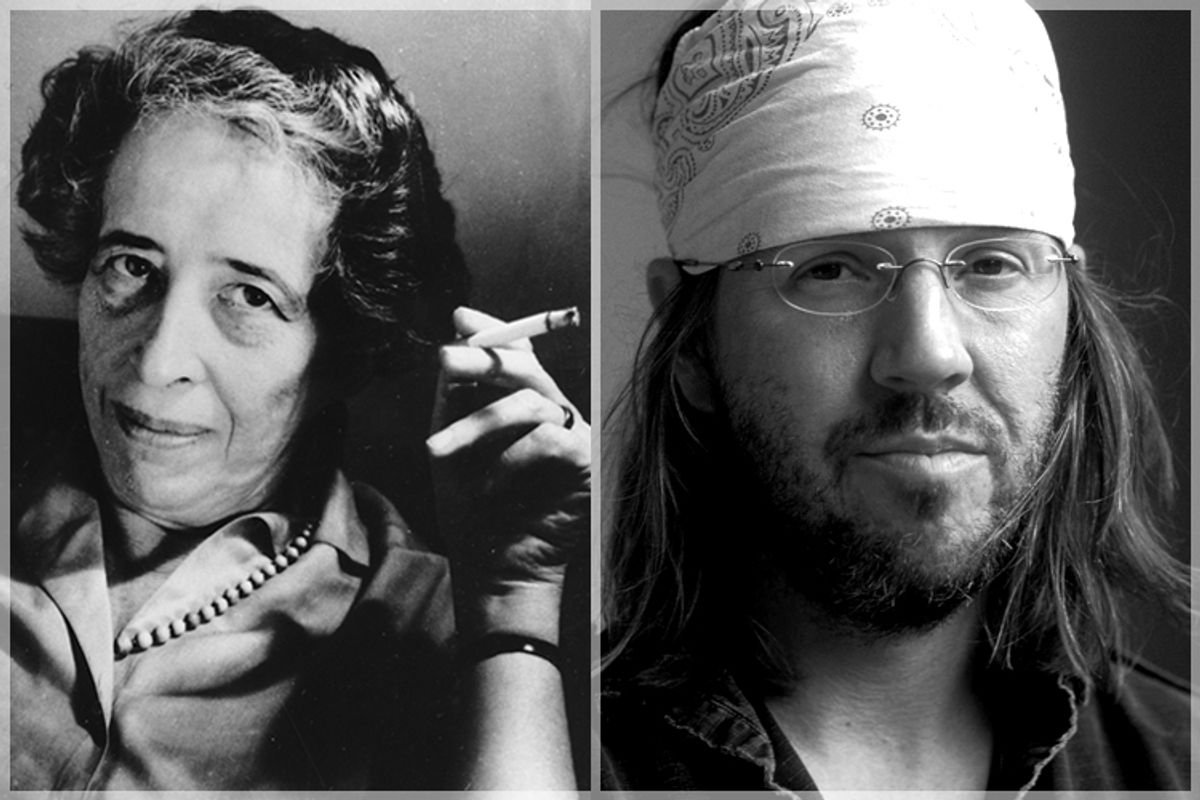 Irony is routinely deplored these days, with a David Foster Wallace essay from way back in 1993 continuing to provide much fodder for its detractors (although irony's defenders have also spoken up). Jedediah Purdy, an earnest advocate for earnestness, even wrote a whole book on the subject, "For Common Things: Irony, Trust and Commitment in America Today," in which he made it very clear that irony is the antithesis of trust and commitment. That's why one chapter in particular of Marie Luise Knott's wonderful new book, "Unlearning With Hannah Arendt," piqued my attention.

Knott, a journalist and author living in Berlin, set out to explore how Arendt, a German Jew and one of the 20th century's great political and moral thinkers, made sense of her times. As Knott puts it (in David Dollenmayer's supple English translation), Arendt's experiences in Nazi Germany forced her to deploy certain ways of thinking to find "escape routes from the dead ends of existing traditional conceptions of the world and the human being." One of those intellectual tools was irony, or, as Knott also calls it, "laughter."

Considering that Arendt's most famous work, "Eichmann in Jerusalem," concerns the trial of the high-level Nazi administrator in charge of organizing the genocide of Eastern Europe's Jews, the notion of applying irony, let alone laughter, to such subjects still has the capacity to shock. This and other aspects of Arendt's report on the trial (initially for the New Yorker magazine) led many prominent Jewish figures to repudiate her. Yet Knott maintains that irony was an essential element of Arendt's approach to understanding just what Nazism meant. She needed it to grapple with such seeming paradoxes as the fact that a man capable of Eichmann's enormities would appear to be a rather average, unthinking careerist, a "random buffoon," as Arendt put it, swept up in "the notion of being involved in something historic, grandiose, unique." This potent insight lay behind the phrase for which Arendt may be best remembered: "the banality of evil."

I reached Knott at her home in Germany to ask her more about Arendt's use of irony. Despite her own reservations about her proficiency in English, she offered some illuminating insights into Arendt's ideas.

Your book argues that in her work, and especially in her writings about Adolf Eichmann and the Holocaust, Hannah Arendt had to use a set of intellectual tools to "break" old ways of thinking about morality and history. What was inadequate about the old ways of thinking?

When I first read an essay by Hannah Arendt in 1983, I was deeply impressed by her free way of thinking things through. I only realized later that her thinking and writing were nourished by the insight that existing intellectual tools had turned out to be powerless vis-à-vis totalitarianism. To give you one striking example: the idea that there must be a reason for or a logic to treating someone as an enemy. This tradition of Western thought had shown itself to be powerless. Her main question became: How do we confront the reality of totalitarianism, when it surpasses our understanding? That is where her thinking started, at the place where the knowledge she had did not help her understanding.

One of the most important of the tools Arendt employed is what you call "laughter," particularly irony. Why was irony so essential when she was confronted with a figure like Eichmann?

In my book I wanted to deal with a subject that nobody had worked on: How and under which conditions did Arendt "change her mind." I was not so much interested in whether she was right or not. Karl Jaspers, one of her teachers, calls her work -- especially the Eichmann book -- a defiance of "life-sustaining lies." We all (including Arendt) live with life-sustaining lies, both private ones and public ones.

The life-sustaining lie that Arendt had hung onto for years was that the Nazis, and especially the Nazi murderers, were demons, because of their furious anti-Semitism. Seeing Eichmann in his suit and hearing him speak his bureaucratic German was a shock. What she confronted in this trial was -- to put it much too simple -- a totally new and totally shocking phenomenon ("Erscheinung"): Could it be that people can turn into murderers without having a real inner motive? Could it be that Eichmann could as well have followed, with the same ferocity, other ideologies and could have murdered other people? What she understood was: Maybe evil is banal. Maybe evil is rootless. That was a phenomenon she had to think through. So she had to think about it in a new way. She had to overcome her own life-sustaining lie. I think we know from our daily life, how much laughter can bridge a situation that words cannot express.

Some have argued that the subject of the Holocaust is too terrible to ever admit anything like humor. Obviously, Arendt was not laughing off atrocities, but she was attacked for some statements she made ironically -- such as noting that Eichmann resembled a "Zionist" for suggesting that Bohemian and Moravian Jews be resettled in a specific area -- and for the implied laughter in what she wrote about Eichmann. Why do you think that bothered people so much?

Of course Hannah Arendt knew that Eichmann was an anti-Semite, an SS officer and the organizer of the murder of millions of Jews. What unsettled and shocked her was to hear this anti-Semite dressing up his testimony with whatever came to mind, even going so far as to call himself a philo-Zionist.

Arendt insisted on defending the existence of a common, shared world. As a Jew she had experienced the triumph of the Nazis and the way their ideology had permeated, step by step, every aspect of life and language in Germany. The collapse she discerns is the collapse of the fabric holding human beings together in this world, the fabric of laws and traditions and ideas that had in the past kept the world from falling apart, the idea of solidarity and of humans negotiating the present and the future together. “The totality of the moral collapse” meant for her that the Nazi perpetrators could perversely twist the Christian precept "Thou shalt not kill" into the command "Thou shalt kill." It meant moreover that parts of mankind (first the mentally ill, then the Jews, then ...) had been declared superfluous and step-by-step conditioned to fit the Nazis’ image of them, to be and behave like victims. They found themselves in a situation of total lawlessness and total powerlessness and were thrown out of the human world, i.e., murdered.

To come back to the life-sustaining lies that disguise our understanding: After the war Germans found it easy to declare that the Nazis were radically evil. Germans liked to think of themselves as good people. The persecutors, the perpetrators, the Germans who deported the Jews to the camps and killed them – those were “the others,” the beasts, the barbarians, the demons. This was a way for Germans not to deal with the darkest chapter in their murderous history, a way that in fact also denied the Jews any scope for action. In her Eichmann reportage, Arendt, who was a theoretician of political action, was concerned with the threats to the human ability to act. She asked herself whether there are times under a totalitarian regime when non-action, i.e., the refusal to act, becomes itself an action.

You make the important point that fascism, like other forms of totalitarianism, imposed a "monocausal" and "rigidly fixed" idea of meaning on its citizens. Irony typically involves holding more than one meaning in your mind at the same time. For this reason, perhaps, it still makes people uneasy. In America, it is common for people to object to irony as the antithesis of sincerity and authenticity, of a toxic detachment. The late novelist David Foster Wallace wrote that irony is an agent "of great despair and stasis" in American culture. How do you think Arendt's liberating irony is different from the pop-culture irony that Wallace worried so much about?

Arendt detaches herself from her own feelings, her own prejudices that have turned out to be an obstacle to understanding the facts. She is doing this detachment by laughter to obtain the contrary of detachment, to be able to go deeper into what is at stake -- to be able to attach her mind to what is there, instead of staying attached to what she expects or hopes to see.

Wallace has a point in stating that irony can "make viewers feel smarter than the naïve public, and to flatter them into continued watching." That is a totally different phenomenon and one we have here in Germany too. This type of irony is keeping you at a distance from what is going on. Media irony is the result of a society, where people are thought of as consumers, while Arendt's irony is the contrary. She wants to get closer to reality by overcoming her own impediments of thinking.