"Community" canceled after five seasons -- and an era ends for NBC

Five seasons and no movie 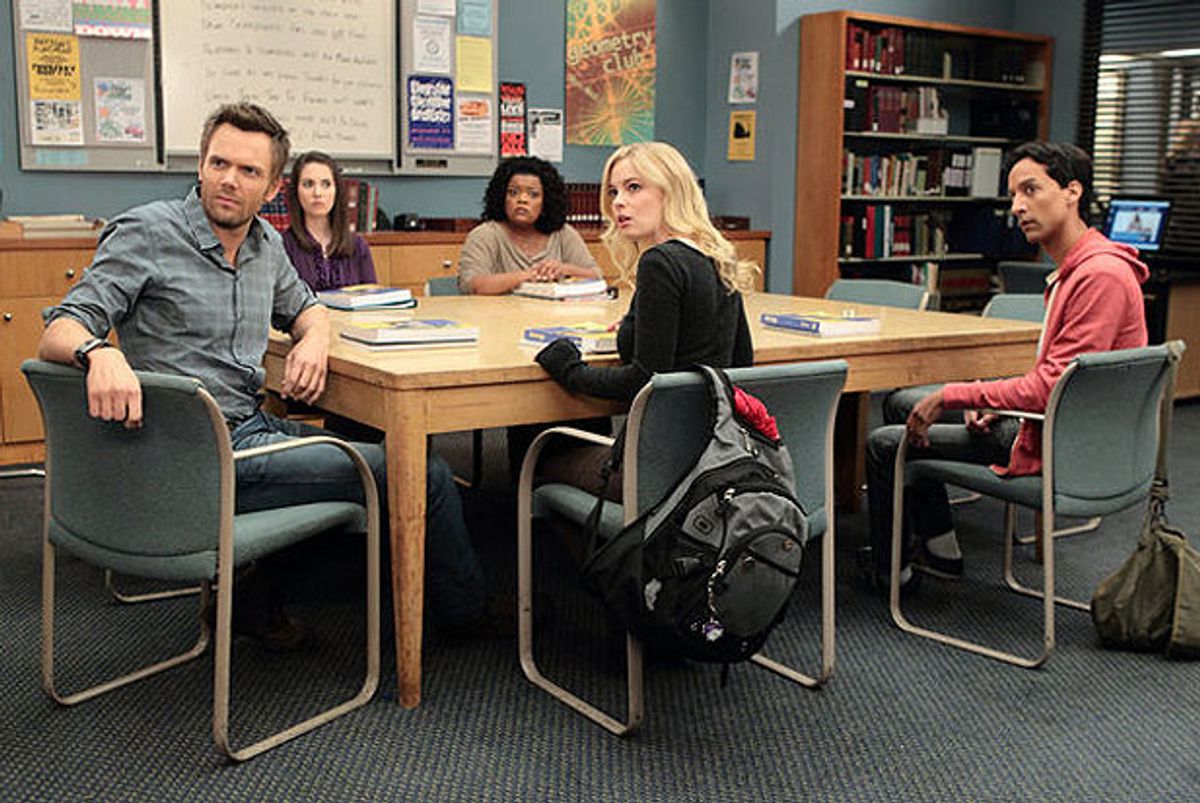 NBC has denied superfans of "Community" the chance for what they most dearly hoped -- six seasons and a movie.

After five tumultuous years, the community college-set comedy has come to an end, according to a BuzzFeed television editor.

"Community," which debuted as part of a Thursday-night lineup that included "30 Rock," "The Office" and "Parks and Recreation," leaves the air after five years of struggles in the ratings and behind the scenes. Famously tumultuous show creator Dan Harmon was replaced as show runner for the fourth season before returning for the most recent set of episodes; supporting actor Chevy Chase left the show in a mutual agreement with NBC prior to the fourth season, too, and Donald Glover left during the fifth season due to other commitments in his burgeoning career.

"Community," famed for its elaborate homages (to claymation film, to "My Dinner With Andre," to just about everything but life at a community college), helped to launch the career of Glover, now a rap artist, and comic Joel McHale, whose ongoing gig on E!'s "The Soup" wouldn't, alone, likely have gotten him the emcee role at this year's White House Correspondents' Dinner. It also established Harmon as a superstar in the podcast community, a role that, happily for him, isn't contingent upon the decisions of network executives.

The departure of "Community" leaves "Parks" as the only NBC comedy to have debuted in the 2000s (the only other comedy to have been renewed for next year is the recently debuted "About a Boy"). And it marks, too, yet another passing of an era for NBC: the network's era of sitcoms that stretched from "The Cosby Show" to "Friends" and "Frasier" was supplanted by one of smaller, quirkier comedy shows. ("30 Rock," for instance, was never strictly speaking "popular" -- just beloved by critics and committed fans.)

Attempts this year to bring back old-school, big-tent comedies with stars like Michael J. Fox ("Family Ties") and Sean Hayes ("Will & Grace") completely failed, and the tiny but committed audience of "Community" evidently isn't one NBC feels it must hold onto. The network's success in recent years has been contingent on reality show "The Voice" and on midscale dramas like "Chicago Fire"; its era of programming to a small niche of comedy-literate fans is one show closer to conclusively having ended.