Fox News devolves from climate denial to rejecting all science

Witness the spectacular collapse of the right-wing mind 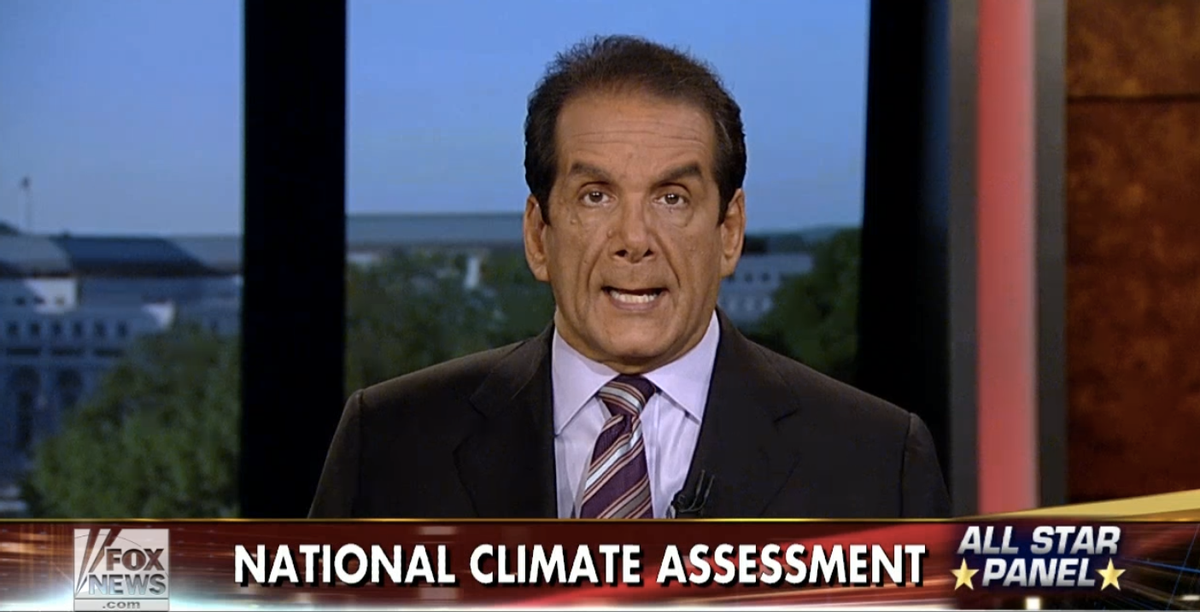 Science is dead, Fox News declares. That may as well be the headline of Jonathan Chait's epic takedown of Fox panelists George F. Will and Charles Krauthammer who, in the process of dismissing the National Climate Assessment, managed to dismiss all of Western science.

Krauthammer's widely criticized likening of climate science to a "superstition" like "the rain dance of Native Americans" aside, Chait correctly, and quite spectacularly, calls out the "intellectual giants of the right" for entirely abandoning their intellect in a recent All Star Panel appearance.

The meat of his piece swiftly dismantles the litany of misleading statements, half-truths and flat-out lies put forward by the panelists. Krauthammer's argument that limiting U.S. greenhouse gas emissions will have negligible effect because “we don't control the emissions of the other 96 percent of humanity,” for example, overlooks the fact that the U.S. is responsible for a full 16 percent of the world's emissions. Will's assertion that there is "no evidence for the increase in extreme weather" is belied by the Intergovernmental Panel on Climate Change and the National Oceanic and Atmospheric Administration, which have both concluded the opposite.

As for the consensus of 97 percent of scientists who say man-made global warming is a real phenomenon, Will contends that "they pluck these things from the ether" (as Chait points out, the number actually comes from this report), while Krauthammer just dismisses the idea of a scientific consensus. "Ninety-nine percent of physicists convinced that space and time were fixed until Einstein working in a patent office wrote a paper in which he showed that they are not," he says. "I'm not impressed by numbers. I'm not impressed by consensus."

Thus begins the point at which Krauthammer completely gives up on science, Chait writes:

It is hard to dispute this except to note that Krauthammer here has taken a radically skeptical position not merely on climate science, but on all science. His argument implies that no scientific argument merits respect. Given the provisional and socially constructed peer pressure driving the consensus theory of aerodynamics, it is amazing that he is willing to travel in an airplane.

And he's followed closely behind by Will, who says, "There is a sociology of science...and engaging the politics of this, we have to understand the enormous interests now invested in climate change." Chait's response:

Will here does not specifically extend his critique of climate science to all sciences, but it surely applies. All fields of sciences have a “sociology”; all receive government grants. If those things can induce climate scientists to manufacture a false consensus, the same effect can work just as well in any other scientific field.

Put together, Chait writes, the whole thing is worse than a few offensive or misleading statements. It represents "the current state of the right-wing mind" as one that's completely lost of its rocker:

To watch Will and Krauthammer grasp for rationales to cast doubt on an established scientific field merely because its findings pose a challenge to their ideological priors is a depressing, and even harrowing, study in the poisonous effects of dogma upon a once-healthy brain. They have amassed an impressive array of sound bites and factoids, and can render them with convincing gravitas, and yet their underlying reasoning is absolutely bonkers. The analogy Krauthammer suggests of the rain man — an authority figure possessed of commanding prestige despite lacking even rudimentary analytic powers — turns out to be apt; only he is describing himself.

His entire takedown is well worth reading here.