Dolly Parton on Elvis and Willie Nelson: "I still play like a child"

The country music icon dishes tales of Elvis and Willie, and shares where her business sense and humor come from 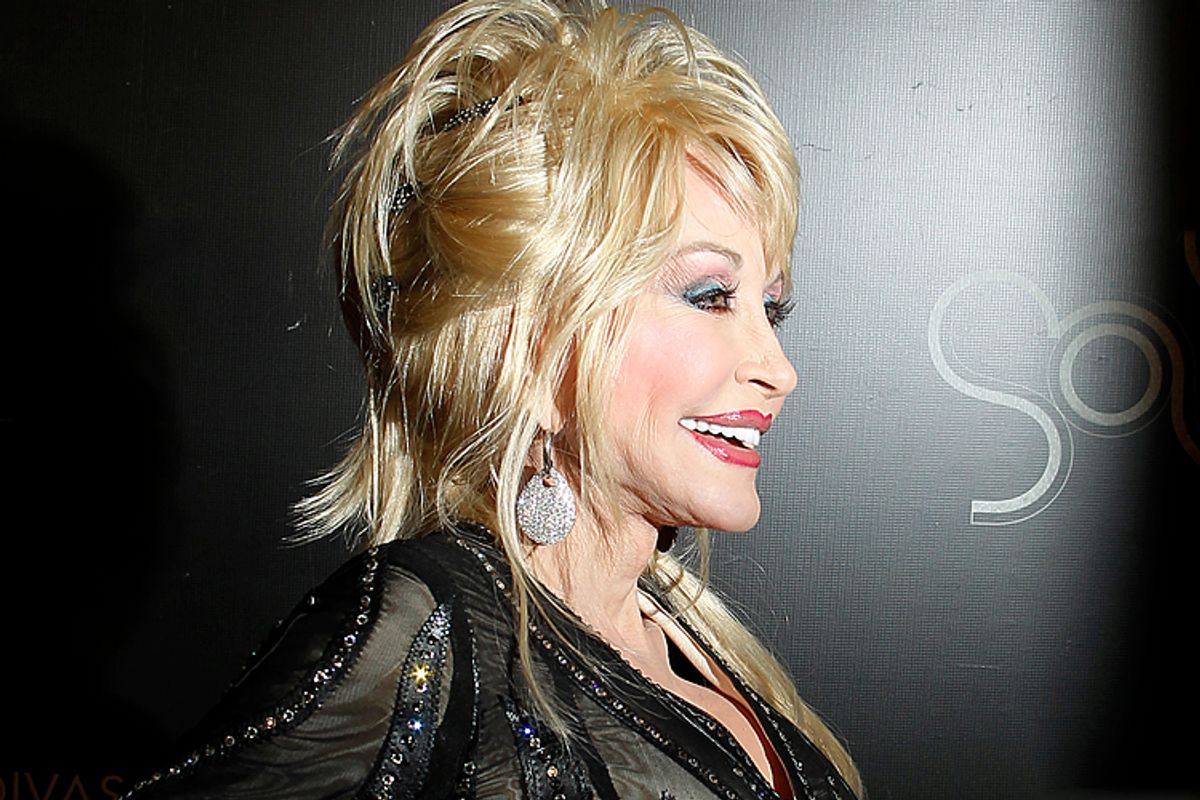 There’s a lot to love about Dolly Parton. The sweet, soaring voice, the prodigious songwriting chops, the voluminous, closer-to-god, big blonde hair. Then there’s that personality. The woman knows how to fire off a funny, self-deprecating quip when she wants to, and a few of her wisecracks have become almost as legendary as her songs. “It costs a lot to make a person look this cheap” and “I was the first woman to burn my bra -- it took the fire department four days to put it out” are just two of the signature lines in her arsenal.

That cartoonish persona that the public loves was cultivated by Parton herself. Despite the dumb blonde jokes and the never-ending fixation on her physique, she’s a whip-smart, prolific creative talent who knows how to wield her wicked sense of humor -- a skill that some more humorless, defensive and reactionary celebrities could learn from. The woman who modeled her look after the town trollop (“I thought she was the prettiest thing I’d ever seen when I was a little girl,” Parton said of her childhood beauty icon in her 2009 University of Tennessee commencement speech) also wrote “Coat of Many Colors,” “I Will Always Love You” and “Jolene.”

When you watch old interviews with Parton from the '70s and '80s, it’s hard to believe how brazenly everyone from Barbara Walters to Johnny Carson asked her for her measurements. If that happened to a respected young female musician today there would be hundreds of blog posts and protest tweets, but Parton always took things like that in stride. In fact, she embraced it. That ability to own her image and roll with the punches is still part of her charm.

Parton is back on tour to promote "Blue Smoke," a new album that shows off her signature mix of bluegrass, gospel, country and pop. She’s got duets with old friends and collaborators Willie Nelson and Kenny Rogers, and she covers Bob Dylan’s “Don’t Think Twice” and, weirdly enough, Bon Jovi’s “Lay Your Hands On Me.” The woman who grew up dirt-poor, the fourth of 12 children in Sevierville, Tenn., isn’t showing any signs of slowing down. Right after high school she made her way to Nashville and then fulfilled her childhood dream of becoming a worldwide star. Why would she slow down and rest on her laurels? She’s doing exactly what she dreamed of doing as a kid in that tiny mountain town.

I got the chance to talk to Parton recently, at 7 a.m. on a Monday. The very first thing she said was, “You’re Dina and I’m Dolly, so I guess that makes us Double-D!” I’d like to think that was the very first time she’s used that line. Even if it wasn’t, who cares? It’s Dolly Parton.

Your song “If I Had Wings” is one of favorites on "Blue Smoke" – it’s such a beautiful, melancholy tune.

I love that one too. A lot of people are talking about that song. I’ve always been fascinated by everything with wings. I thought I could write a song called “If I Had Wings” about getting out of all this heartache and just flying away.

The duet with Willie Nelson on “From Here to the Moon and Back” is great too, and you said that singing with him is one of the hardest things anyone could do. Why is that?

His phrasing is so unique and mine is also. You’d think we’d work great and we do sound good; it’s just that trying to catch him or trying to figure out where in the song he’s trying to go is a big job. But I loved doing it. That’s a song I wrote for the "Joyful Noise" movie and Willie loved it. He’s a joy. I’ve loved him since my first days in Nashville. We came here about the same time and we both worked with Combine Music and Monument Records and RCA. We were like little pals in the early days in the '60s. Trying to sing with him is almost funny. He’s just so hard to catch because he’s so different.

You’ve always been a songwriter, but has your process changed over the years?

It’s the same. It’s just something I do and it’s just how I express myself. I just have a gift of rhyme and everything is a song to me. Every time I watch the news in the mornings or any conversation I have with people, something’s either said or felt or thought and I think, that’s a good idea for a song or that’s a good line or that’d be a good line to start a song.

How often do you write?

I write all the time. It’s a hobby, too. It’s just a natural thing when I’m flying or I’m on the bus or taking a bath, I always keep a little notepad or a recorder everywhere because I don’t want to lose a really good line. I still love it like I always did. I would imagine I’ll always do it.

A Rolling Stone interview from 1980 said that you used to make secret wish lists of goals you wanted to accomplish and things you wanted to happen. They wrote that your “private lists worked like voodoo.” Do you still make those wish lists?

I still do that. Well, it’s not really a wish list… it’s more like a dream list than a wish because “wish” means you’ll always stay wishing because you gotta wish until you turn it into a dream. But I do that and I make a plan about every seven years of things I want to accomplish, and I check up on it. It’s ironic how much of it I always mark off. I still pray and do my affirmations and my spiritual work and speak out the things I hope to accomplish. Everybody has their little rituals, and that’s just part of mine.

You’ve always been a good sport about the more personal questions you’ve been asked over the years, whereas many celebrities might not handle those moments so well.

I have a sense of humor about everything. If you’re going to be in the public eye you have to. There are people like you who ask everything they want to know to write their articles, and I’ve never shied away from any of that. All that’s just part of who I am.

You said no to Elvis and his manager "Colonel" Tom Parker when they wanted to record “I Will Always Love You,” because they wanted you to give up publishing rights, and even early on in your career you seemed to be pretty business savvy at a time when a lot of musicians – especially female musicians – were being taken advantage of. Where do you think your business sense came from?

I think I got my business sense from my daddy. He was a very smart man. He wasn’t very educated but he had a really good sense of reasoning and bargaining and a sense of how to make things work and how to save and make the most of every penny he did manage to make. My mother’s people were the musical, creative people so I got that side from her, but I watched my dad closely and I inherited a lot of his qualities. I really think it all came from him.

When you’re not on tour and performing and giving interviews, what’s your day-to-day life like?

I’m very family-oriented and family loving and my husband and I will have been married 48 years in May, and we’ve been together for 50. We love our little RV and we run around town locally, stop on the riverbank and pick up some food. At home I love to cook and just hang with him. I have my nieces and nephews and grandnieces and -nephews, so I love to babysit and play with them. I really have a very ordinary behind-the-scenes life. I still play like a child.

What’s it like performing and coming out with new albums at this stage of your career, as opposed to the early days in Nashville?

Well, of course life moves on and you adjust to whatever happens around you. Adjusting to the passage of time I think is a key to success and to life, just being able to roll with the punches. But it’s everything and more than I had hoped. I just knew this was how I wanted to spend my life: making music and making people happy. I’ve been very blessed that I’ve been able to see my dreams come true. A lot of people don’t get to say that, and now that I’m older I really appreciate it and am more humbled by it than I ever was before. I always appreciated it, but when you’re older you reflect more and now I really think about how this has been a great life and God has been good to me and I’ve been blessed with wonderful people helping me along the way.

I just want to continue to do good work. I’m writing my life story as a musical and I want that to turn out good, so hopefully that’s one of the dreams I’ll see come true.

Dina Gachman has written for The Hairpin, the Los Angeles Review of Books, and Interview Magazine. Her first book, "Brokenomics," will be published by Seal Press in spring 2015. She's on Twitter @TheElf26.