Monica was our sex-ed teacher

My generation of women came of age against the backdrop of the Lewinsky scandal, and it shaped our view of sex 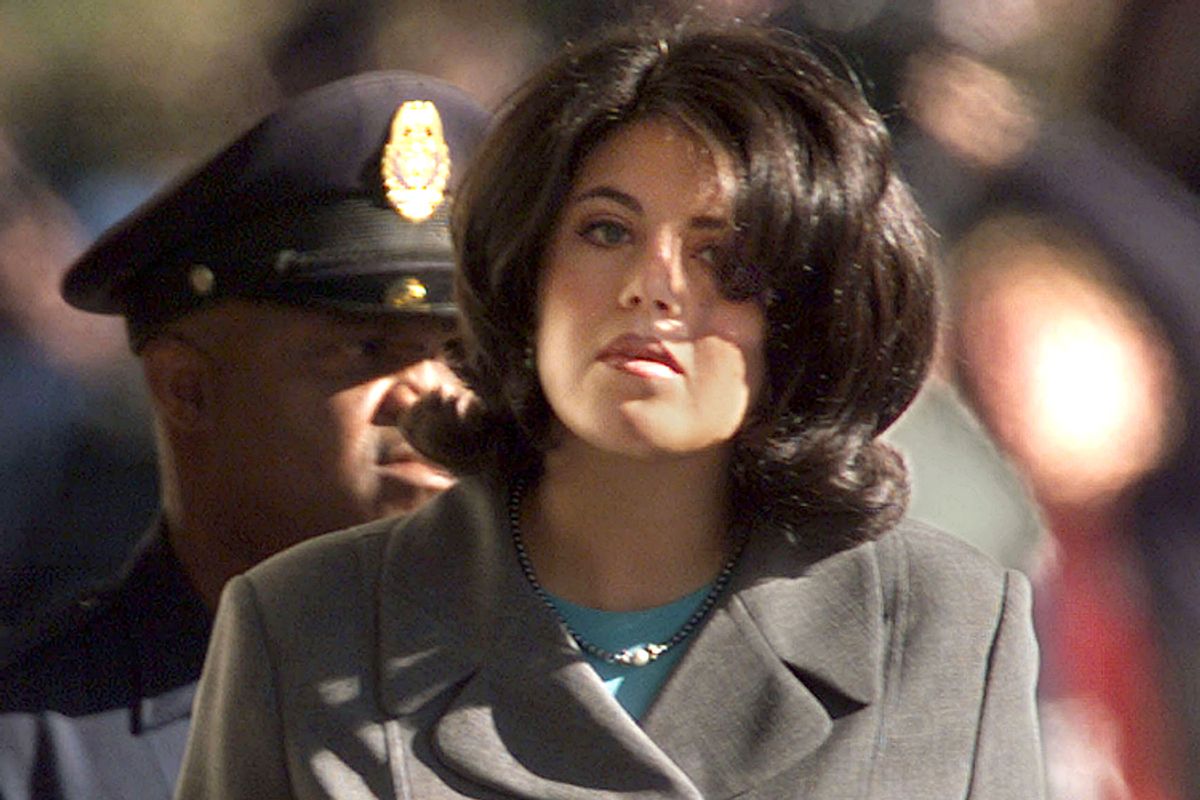 I was browsing one of the many kitschy, off-color shops on San Francisco’s Pier 39 when a shirt caught my eye. It had a picture of Monica Lewinsky with a slick of white on her upper lip. Below her smiling mug it read, “Not milk.” Next to it, there was a t-shirt reading, “Bad girls spit, good girls swallow.”

All of a sudden, blow jobs were everywhere. I had only a year or two earlier learned that such a thing existed. Now references to the act were on t-shirts, in the newspaper and on television. It was a punchline; she was a punchline. The world was simultaneously telling me that Monica was bad and that giving a blow job was good -- so long as you swallowed. It was perhaps the first time that I tried to understand what I didn’t even realize at the time were cultural contradictions around sex.

How could blow jobs be both sexy and shameful? Did Monica spit? Was that why her blue dress got messy? Is that why she was being shamed? Or was it that she wasn’t thin enough, as the tabloids seemed to suggest? Did you have to be thin and beautiful and swallow to be a “good” girl? My pubertal brain just wanted some clear directions to follow. I didn't realize what a hopeless desire that was.

I’m not the only one. For some of us, it was an education in cynicism about men. Because of the scandal, “Jessica” tells me, “I learned at 13 that everyone has sex, everyone lies about sex and that most men usually cheat.” In her case, this was actually comforting news: Her father and stepfather had been unfaithful, and suddenly it seemed a normal problem to have.

Anne, who was 17 at the time, tells me, "Sometimes I hear people talking about how people in my generation think that oral sex is not sex, and that this is due to the Lewinsky scandal. And by people I mean my therapist." Indeed, researchers have actually studied this topic. A Guttmacher report speculated that, based on research over time, the scandal "may have been a turning point in conceptualizations of oral-genital contact." It went so far as to term this shift "the Clinton-Lewinsky effect."

It wasn't just watching the president of the United States engaging in hair-splitting arguments over the definition of "sexual relations," either. My friend Elissa was 13 when the story broke and says, “My mom classified a ‘blow job' -- whatever that was, I had no idea whatsoever -- as ‘not sex,’ meaning it was ‘less bad.’” Her mom was an ardent Clinton fan looking to minimize the scandal. As a result, Elissa thought of blow jobs as “somehow not sex-related.”

At the same time, the scandal made oral sex seem like a grave offense. “It scared me away from ‘blow jobs,’” she said. “Like if you gave a blow job, then you would be punished to the highest extent of the law.” After all, Monica gave a blow job and she was being hounded by the FBI.

Jodie, who was a very advanaced 9-year-old at the time, says it was “the first time I felt like I needed to be careful with my brand-new sexuality and distance myself from any thoughts or actions that could lead me to being seen like Monica was.” She adds, “The ideology that stuck with me the most from being at a very impressionable age when the whole fiasco was going on was that men were famous for doing things and women got famous because of having sex with those men.”

Elissa remembers thinking it was Monica’s fault. “I had feelings of hatred toward Monica for ‘doing this to my president,’” she said. "I placed the blame more squarely on her shoulders, unaware of power dynamics and media spin and so on." It was an early lesson in what most girls eventually learn: that women are to blame for sex. Men can't control themselves and women are naughty temptresses. Got it? Got it.

Of course, now Elissa has “all the sympathy and empathy and compassion and sisterhood-solidarity feelings for her.” That’s because she grew up and got to experience firsthand “the sexism and misogyny and cultural double standards inherent in the workplace and our relationships." On a similar note, Megan Carpentier writes in the Guardian, “Women are intimately familiar with the idea that, if we make one wrong decision about a guy, it could mean the end of our dreams for ourselves. Pick up the wrong stranger at a bar and wind up dead," she writes. "Give the wrong man a blow job, and find yourself unable to ever find an actual job.”

Monica taught us, she continues to teach us, that sex can grant women power, but it can also bring them ruin. As Amanda Hess writes this week in Slate, “We’re still living in a world where women are defined by the sex they have, while men are defined by, you know, other things they say and do.” There have always been women who have taught, or been used to teach, other women about the perils of sex. It's how we learn to slut-shame each other, to denigrate other women's sex lives in the interest of protecting ourselves, all the while thinking, "As long as it isn't me on the t-shirt."