The golden opportunity our cities are missing 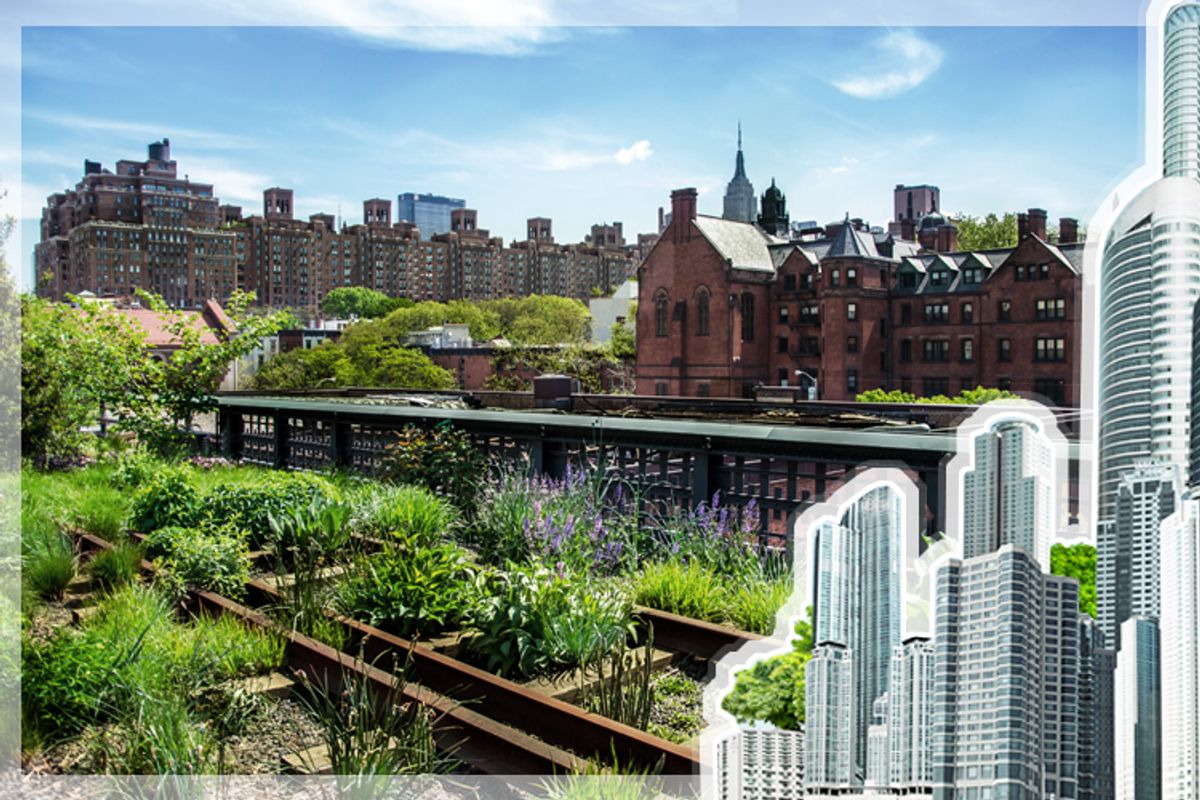 When Bill Drayton looks at New York, he sees a tremendous missed opportunity. The structural skeleton of this metropolis, as in other American cities of its age, is the hollow block: a group of homes, row houses or low multi-family buildings grouped around an open middle space. Former New York City Mayor Robert Wagner once estimated that 60 percent of the city’s 3,000+ blocks were “hollow.”

Drayton would like to see every one of those hollows transformed into a private park for surrounding residents. Each core is nearly an acre and a half — twice the size of a playground at an NYC primary school; one-and-a-half times the size of the median NYC park. As an open expanse of grass beneath great trees, a shared backyard would be large enough for soccer games, picnics and barbecues, but secured from the surrounding city by the walls of neighbors. A checkerboard of private backyards is, he believes, a squandered resource.

In cities where large parks are few and far between, the future of parkland is right in front of us (or behind us, as it were): thousands of shared parks, playgrounds for the city’s children, meeting places for its adults, and crucibles for building community ties.

“The impact on cities would be extraordinary,” Drayton told me, imagining a city anchored by hundreds, if not thousands of hidden, community-run parks. A former management consultant at McKinsey, Drayton is the founder of the social innovation hub Ashoka, under which he operates Community Greens. The organization’s goal is to propagate the shared yard across American communities.

Could this ever work? The urban backyard, puny though it is, represents a man’s source of sanity in a city where privacy is hard to come by. Even if you could find one homeowner willing (or naive enough, depending on your view) to relinquish private property in favor of the commons, could you ever find a whole block’s worth of such people.

You can — and Drayton did, living on a block of Greenwich Village called MacDougal-Sullivan Gardens. Here’s how Drayton remembered the block’s backyard, writing in the Atlantic in 2000:

Owners of the twenty-one townhouses surrounding the garden retain small private areas that they can plant as they choose, but fences higher than four and a half feet are prohibited. The private greens merge visually with the common green, a rectangle of grass shaded by tall trees. At one end is a children's play area and a basketball court, at the other end a garden planted with flowers. Here the residents have children's birthday parties, charity cocktail parties, egg hunts, trick-or-treating, visits from Santa (who travels over the garden in a sleigh drawn along a wire, showering candy onto squealing children below), caroling, and ice skating when they decide to flood the green.

Today, these are some of the most chic, expensive houses in New York (Vogue editor Anna Wintour lives on the block), but their form is owed to the foresight of another era. In 1920, a businessman named William Sloane Coffin bought the whole block and instituted its shared yard as a sort of “garden city” designed to compete with the appeal of the suburbs for the middle class.

It was a relatively popular idea. Jackson Heights, Queens, whose blocks are composed largely of multi-family co-ops, is famous for its beloved, shared courtyards. Contemporary European blocks, from Madrid to Copenhagen, were designed around courts shared by hundreds of residents, miniature neighborhood democracies. London has dozens of key-locked private parks, access to which comes with the purchase of a neighboring home. (As a side note, many of London’s popular public parks were formerly private. They were opened when the British government ordered their iron fences melted for munitions in the 1940s, which George Orwell praised as a “democratic gesture.” But some suspect the war effort was merely a pretext to create more public green space in the city ...)

Even some suburban developers recognized that when it came to yard planning, the whole was greater than the sum of its parts. In Houston, for example, the architect Cameron Fairchild designed the homes of River Oaks Courts in a horseshoe around an open, private green. This led to a supersized yard for residents, allowed for marginally increased density, and placed most homes away from the street. When the Stanmore Drive houses opened in 1937, the reviews were ecstatic. “This establishes the fact,” wrote Good Housekeeping, “Neighborhood is of First Importance.”

The idea isn’t just that a larger space is a superior environment for activities. It’s also a way to get people to stop “bowling alone," by giving neighbors an easy way to get to know each other. As Peter Lovenheim, author of "In the Neighborhood," has relayed, the percent of Americans who spend social evenings with neighbors more than once a month had dropped to 30 percent in 2008, from 44 in 1974. Supporters believe that shared, private green spaces — and the social capital they require to create and engender once created — could regenerate American civil society block by block.

Why then, are there so few shared, private spaces in American cities and suburbs? In part, it’s a result of American development history: low rates of homeownership in cities discouraged such community-dependent investments, while seemingly limitless land for suburban development made “sharing” unnecessary and even stigmatized. It’s also a legal issue: Many communities have fence requirements, or lot requirements, or prohibit collective ownership entirely. Americans do share yards on a piecemeal basis — in Washington, D.C., in Santa Barbara, California, in Boston — but often, such a decision requires multiple zoning variances. Finally, some credit is due to the American individualist, eager to lay claim to a plot of land all his own. Even if it’s barely big enough to throw a baseball.

Mostly, though, Drayton believes there are two barriers to the spread of the form today: organization and incentives. As with any type of collective action, resisting brings perverse rewards (a buyout, say, or a concession) compared to organizing, which can require years of effort. In short, local laws offer more obstacles than incentives. Community Greens helps interested blocks to navigate that legal and organizational landscape.

In Baltimore, the organization succeeded in helping a block turn its interior alleyway into a semi-private, shared space. But first they had to get the Maryland House to amend the Baltimore City Charter, and the Baltimore City Council to pass a “Gating and Greening Alleys” ordinance. Eighty percent of owners must agree in order to reclaim control of the alley from the city; if traffic is to be impeded, 100 percent agreement is required. Once the alley was in neighborhood control, neighbors felt comfortable opening up their backyards, creating a unique corridor where kids run and play without parental supervision. Baltimore has over 600 miles of alleys; so far, seven blocks have hit the 80 percent threshold.

But the easiest way to create such a community is to design it as a shared space from the start. That’s what Elizabeth Moule and Stefanos Polyzoides, a husband-and-wife architecture firm, do in the Los Angeles region. They have built nearly a dozen communities of courtyard housing, and Polyzoides has also written a book on the subject, "Courtyard Housing in Los Angeles."

“We know from a social point of view that the happiest human beings live in circumstances that allow them to interact in many kinds of space,” Polyzoides said. The courtyard, he said, was “a realm where people find some sense of coming together” – a microcosm of the neighborhood and the city itself. In one of their developments in Pasadena, he noted, residents began gathering spontaneously for a glass of wine on Friday evenings – and those with no dinner plans often wound up eating together afterward.

Such collective spaces were once thought impossible to maintain (the tragedy of the commons), ill-suited to personal responsibility, and generally undesirable. But times have changed. Americans are more willing to share than ever, and technology and governance have adapted to make distributing collective responsibility easier – whether through special tax-increment zones or sharing-focused websites.

How do we create new green space in a dense and growing city? “You’ve got parking lots, but that’s basically land held for buildings,” Drayton said. “You can close streets, but there are costs of doing that.”

And then you have backyards, alleys and the rest of the city block’s forgotten innards – a great space waiting to happen.