This Mother's Day, Amazon thinks I am a 1950s housewife

Amazon's gift ideas for moms: Vacuum cleaners and irons for the "high-tech homemaker." Please don't buy me those 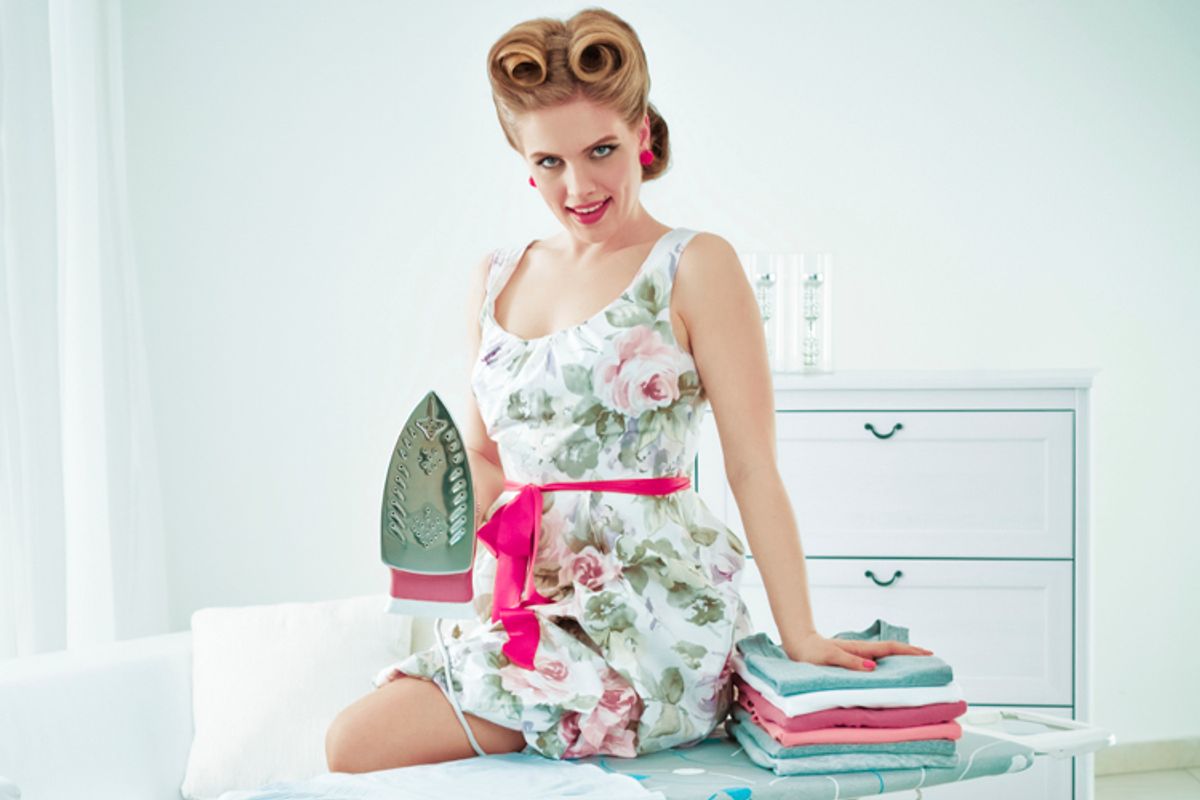 My personal Mother’s Day wish list includes me, some white sheets, a fluffy robe and a hotel room, alone and with no connection to the outside world. I will also accept a card and some roses. But if you wander over to the “Mother’s Day” gift page on Amazon.com, you will find a very different vision of the modern mother. Suddenly you are confronted with a virtual door-to-door salesman peddling George Jetson housekeeping "contraptions" to housewives in 1954.

For just $429, you can own a multi-limbed vacuum that looks like a cyborg. For $300, you might get your own space-age silver microwave. Just this morning, a friend forwarded an email that was "personalized" to her from Amazon Prime. It was titled "Last-Minute Mother's Day Gifts In Home & Kitchen” and suggested gifts for the “high-tech homemaker,” including a garment steamer, a sewing machine and a shiny Cuisinart slow cooker. “Gifts for every type of mom,” it trumpeted. "Do they deliver hot tubs on Amazon Prime?" my friend wrote in her email. Because that is what she actually wants for Mother’s Day.

Yes, of course there’s an anticipatory algorithm. And it’s surely possible that my friend received this email because she bought some kind of vacuum from Amazon. That still doesn’t change the fact that this Amazon newsletter is a) demeaning and b) the worst marketing idea ever.

Yes, despite how far we’ve come, domestic chores are still primarily a female job. A 2011 Pew study as well as a report by the U.S. Bureau of Labor Statistics  found that women spend six hours more doing household work and an additional three hours more in childcare than men. The Pew study also found that about 55 percent of mothers who work outside of the home still do most of the housework on average. Fathers who worked outside of the home do only 18 percent of the household work. (Surprised? I love my husband, but I don’t think I’ve ever seen him clean a bathroom sink.) Sure, it’s important to note that men have taken over more of the domestic and childcare chores since 1965 — a little more than double.

But it’s pretty incredible that women are still the focus of cleaning-product sales pitches, even on Mother’s Day — a day on which marketers have attempted to sell us some bullshit sanctity.  Curious to see if Amazon was alone in representing mothers as one-dimensional cleaning machines, I scrolled through some other Mother’s Day lists. I didn’t have to look hard to find more sexist examples. One CBS segment that touted a list of more “high tech” Mother’s Day gifts (a title I instantly thought would break the trope of the vacuuming mom) suggested a $200 baby monitor to measure your baby’s temperature, breathing and body position. The Mophie battery space pack (an iPhone battery booster) was another gift idea “so you’d have plenty of space for your adorable toddler photos and videos.” Because even when it’s not about the kids or the homemaking or the chores — it’s always about them. For the record, CRN.com compiled a list of 25 tech items for moms with only one mention of baby and zero mentions of toddlers. My favorite from that list is the Logitech UE Boombox. Because moms — shocker! — like some songs that don’t begin with the line, “The wheels on the bus.” Oh, and that boombox happens to be sold on Amazon.

Maybe someone in Amazon’s marketing department read the  2012 study that found that when men took on domestic chores -- folding laundry, cooking or vacuuming -- couples had less sex. And maybe that Amazon’s Mother’s Day newsletter to my friend was inspired not by an algorithm, but by reverse psychology. In that case, the subject line should have read: “You don’t know this, but if you buy a new vacuum, you’ll have better sex.” Amazon, next time, just send this.