On boys and balls: How I learned to stop hating sports

I was a theater kid who avoided athletics on principle. So what am I doing on a kickball team? 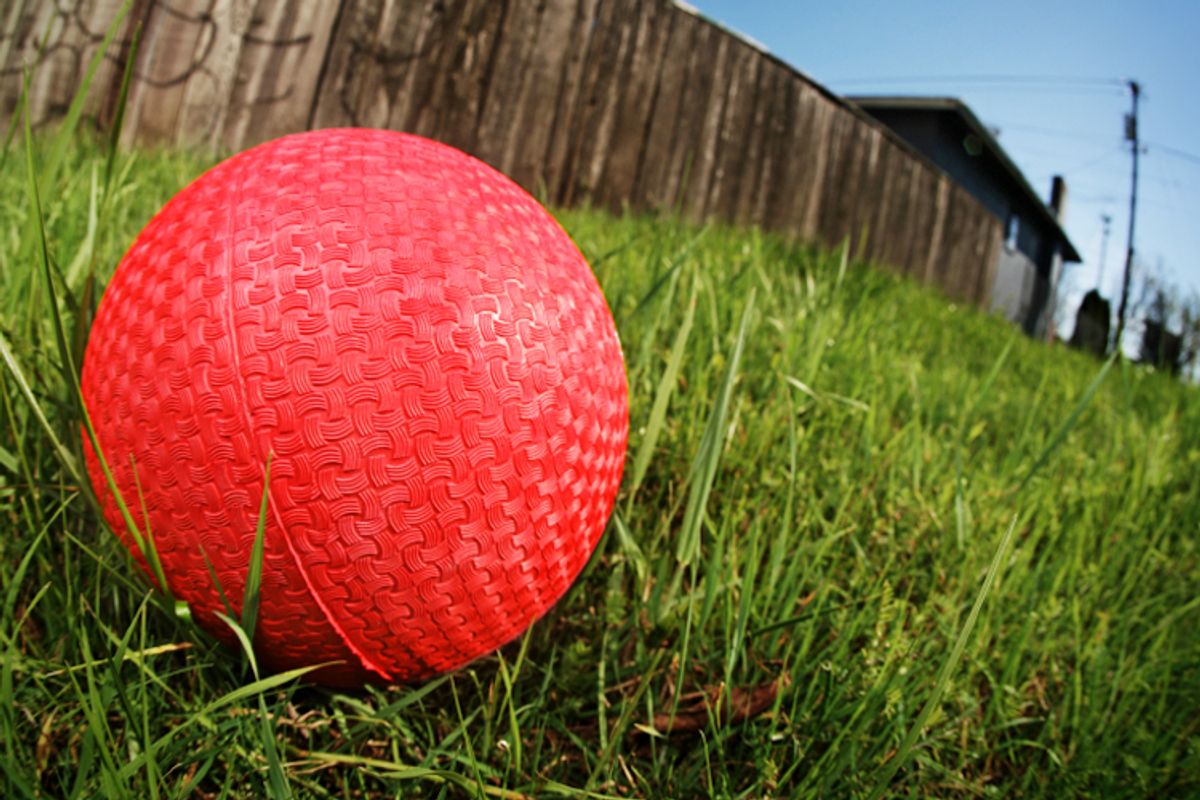 My childhood memories of sports are generally of feeling either bored or inadequate. I’ve never understood why anyone would chase a ball around when one could easily watch  TV and eat a rotisserie chicken. And people — especially boys — seem to have such a weird emotional investment in the whole thing. Boys are always either playing sports or watching sports or talking about sports, whereas I have always disdained sports, almost as a matter of pride. But now I’ve joined a sports league.

Well — a gay sports league. I am a Los Angeles–based homosexual, which means I operate under the impression that my worth depends on how often I move around and pick up heavy things. Already resigned to physical activity, I thought playing a “game” might take my mind off how awful it is to move around. I also imagined that joining a sports team might give me an appealing air of masculinity, and, having spent most of my childhood doing theater, I’ve always wondered what that might look like.

I realize a gay sports league may sound regressive and self-segregating, but understand: Many of us have not gotten over the way heterosexual boys made us feel growing up, with their fearless athleticism and complete lack of interest in having sex with us. These wounds take a long time to heal, and anyway, I’d like to feel as though I can shriek in fear if a ball gets near me. Somehow I sensed this wouldn’t fly in a more traditional league.

Perusing the cushy options offered by the L.A.-based Varsity Gay League (“trivia” counted as a sport among this crowd, which I found encouraging), I eventually settled on kickball, which I remembered disliking less than most other sports. I arrived to our first game to find my new team was made up of young, fit, sporty-looking boys with almost uniformly good bone structure. I didn’t quite understand why these people would choose to get together and kick a ball, instead of just having sex with each other, all the time, forever, but, as the pope says, who am I to judge? I fell immediately in love with maybe six of them.

We started in the outfield, and I was relegated to far behind first base. Not two seconds into the game some distastefully muscled person kicked the ball high into the air and over in my general direction, and I realized with mounting panic that I was probably expected to make some effort to somehow interfere with it. Should I run toward it? It was basically inconceivable that I could connect my body with the thing in the air. Certainly not under the stare of a crowd of people I’d just planned my honeymoon with. I opted ultimately for sort of meandering toward the ball, so that people would know I was aware that I was involved in the game, but not so desperate that I was going to throw myself wildly into certain failure. As could be expected, this did not work out so well. I’m pretty sure the guy who kicked the ball made it onto third base. (If you are familiar with the game, you know that this is almost what they call a “home run.”) Some variation of that happened maybe three times our first game.

This was horrible. And it didn’t help that so many of my teammates turned out to be quite good! Ross, for instance, could kick the ball very high and very far, and then run around the bases very fast. Edward, with the body, was an amazing thrower, and still others could catch like you wouldn’t believe. And they were always saying male-like sporty things, such as, “Nice catch!” or “Great play!” I would chime in sometimes as well, but I was never really in it, and my cheering was delivered with a nerdish bent that I couldn’t bring myself to shake. Someone would say, “Go Tyler!” and I’d say, “Yes, Tyler, best of luck!” We’d score a run and I’d turn into Harvey Fierstein, gushing leeringly, “Oh, well done!” while the guy next to me would say, “Nice, man,” and I’d wonder why he was posturing so aggressively.

I didn’t start to shake my feeling of worthlessness until I made my first catch, probably our fourth game. Somehow I had been trusted with first base, and things were much faster infield. Too fast to really think about, which may have been why, when the ball was thrown right at me, my reflexes seemed to do all the work. All I remember is that when I looked down I found that I was holding a ball someone had thrown to me, and people were happy. I even managed to return the ball to the pitcher, which I’d been told was the custom.

A very strange thing started to happen: I got marginally better at kickball. Every so often I’d catch a ball or get on base, moments that registered for us all as minor triumphs. I also noticed my cheering was becoming less ironic. You weren’t going to hear me say something nuts like, “Nice catch, buddy!” But when I’d shout, “You’re amazing, girl!” at some teammate of mine who’d caught a ball, I meant it.

I started to like the idea of the sporting life. Toward the end of the season I decided to take part in the Varsity Gay League’s trampoline-dodgeball competition. This game is about as stupid as it sounds, and it took me about eight seconds to fracture a metatarsal. It was a week before finals, and I’d broken my foot, a fitting punch line to this whole ridiculous experiment.

To my great relief, no one scoffed or whispered when I hobbled onto the scene to watch our last game. Edward was as pleasant and weirdly heterosexual-seeming as always: “So glad you could make it, buddy!” he said, to which I managed to reply, “Well, of course!” instead of looking at him with quizzical distaste. I was also relieved to find that Jack, a delicate ballet dancer, had also hurt his foot that week only he had thought to adorn his crutches with sequins and glitter. It occurred to me, as the two of us watched from the sidelines, that I might not be the girliest or the clumsiest guy on the team. It was at least a draw.

We were facing off against a team made up mostly of muscular man-boys who were so fearsome you might mistake them for heterosexuals. We spent most of the game tied at zero, but by the bottom of the ninth we were down by two runs and had two outs against us — the stuff of baseball-movie finales. There was a guy on first and our captain was at bat, and I managed to deduce on my own that a home-run kick would tie up the game, and that this would be a good thing. It was tense. I was tense.

The pitch was swift and curved, and we watched as our captain kicked that ball with all he had, sending it far into the outfield, over the heads of all who might have stopped it. He’d already rounded second by the time someone had managed to grab it, and by the time it came infield he’d cleared home plate, leaving us all ecstatic and the championship title tantalizingly close.

It would have been nice to win, I thought — even if I couldn’t take any credit for it. It turns out that there’s something thrilling about being invested in a sports game, even if you’re just standing on the sidelines propping yourself up on a pair of bland crutches. It’s no Albee play, but watching people you’re rooting for go after something they want taps into emotions universal enough for even the most jaded theater kid.

I still have not solved the problem of enjoying physical activity. As I remembered about three minutes into our first game, kickball requires practically zero physical activity: You stand around waiting most of the time, and if your kicks are anything like mine, you may not even have to move. I also can’t say that playing this silly game made me feel like any more of a man. But there were a few times — when I managed to get on base, when I happened to catch the ball, when I found myself cheering without thinking about how I sounded — that for a few weird and magical moments I almost felt like a boy.

Ben Kawaller is a Hollywood assistant and an aspiring professional writer.