How sex workers are using Twitter to tell their own stories 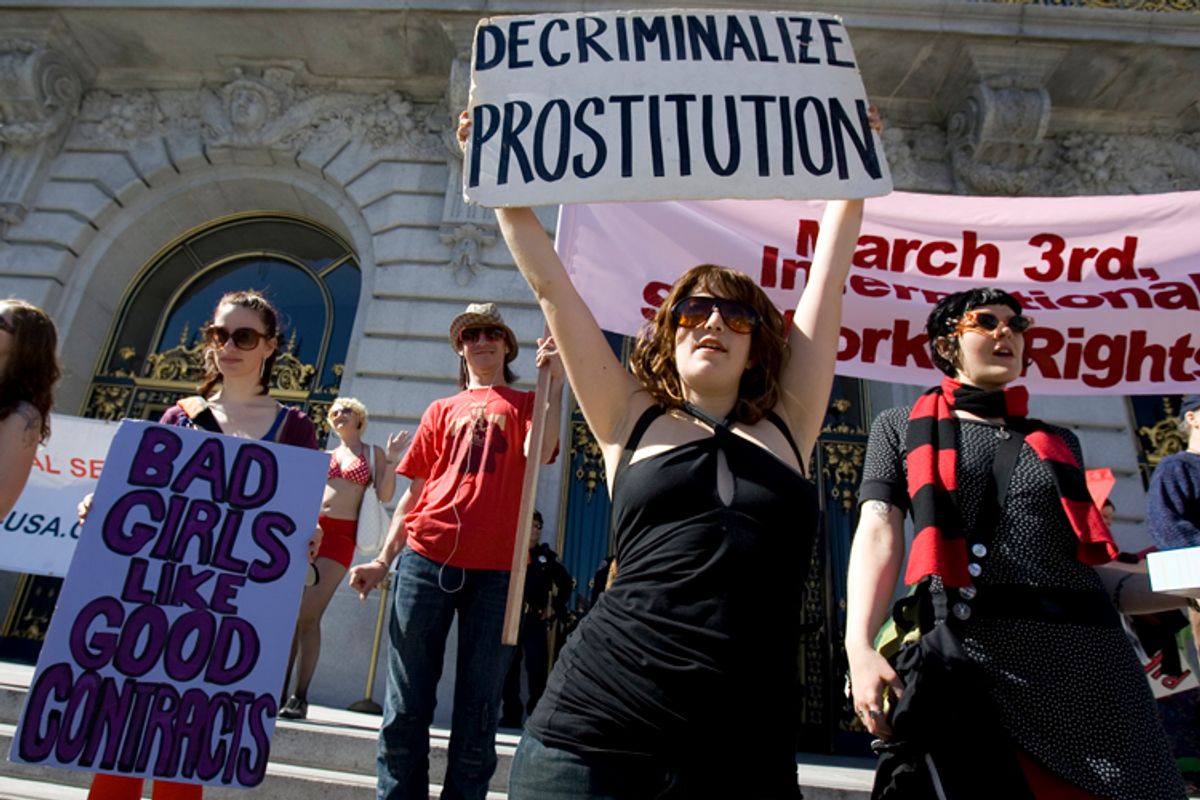 Since sex workers are marginalized and often criminalized, they have historically had limited ability to speak without intermediaries. Instead, their stories and voices are framed by journalists, or activists or human rights campaigners, in the interest of making a moral point, or titillating the public or most often both at once. As Melissa Gira Grant writes in her recent book "Playing the Whore," “Sex workers are to understand that they’re outsiders and outlaws for selling their bodies, and yet what’s called for in relaying their stories is the repetition of that sale, and to a much broader public than they encounter in their work.”

But these days it is far easier for sex workers to talk about their experiences and the discrimination and violence they face, both in society in general, and within the feminist movement in particular, for one reason: On blogs and on Twitter, sex workers can speak directly for themselves. Maggie McNeill, an author, blogger and advocate who was a stripper from 1997 to 1999 and a call girl and owner of an agency from 2000 to 2006, told me by email that the effects have been profound.

"Since the beginning of social interest in 'prostitution' as a subject in the early Victorian Era, moralists, feminists, do-gooders, politicians and soi-disant 'experts' have taken it upon themselves to speak 'for' whores, with the results you see all around you.  Social media have allowed ordinary people to hear sex workers’ voices for themselves, and that will eventually have the same effect gay people’s coming out did in the ‘70s to ‘90s.  It’s much harder to usurp someone’s voice when she’s out there saying you’re wrong."

In addition to individual writers like McNeill, the anonymity of social media, and the ease of communication and organizing, have paved the way for collective projects like Everyday Whorephobia, a group of current and former sex workers who tweet about the stigma sex workers face and about their own experiences. One of their founders was partially responsible for the hashtag #notyourrescueproject, which highlighted the ways in which feminist efforts to save sex workers can end up further stigmatizing and criminalizing them. As the group told me, “It has always been so hard for sex workers to speak about their lives and so the vacuum has been filled by those who either see us as victims or happy hookers. So much of the claims against us, that we don’t talk about the bad stuff or paint an unrepresentative picture, is based on what third parties say about us. Social media has given us a voice.”

Not everyone is so pleased with what that voice says. Feminist and activist Meghan Murphy wrote a lengthy post arguing with the #notyourrescueproject hashtag. Among other things, she suggested that sex workers on Twitter are “privileged people,” and that the most oppressed sex workers are not able to speak through social media. Murphy suggests that only those who are  “happy with their choices to do sex work” are participating online, while those who have been kidnapped and abused are left out.

But all sex workers are stigmatized; all of them are the target of abuse and discrimination, which is why they have in the past faced so many barriers to speaking for themselves in public forums. “Do they actually think the majority of people in developed countries don’t have internet access?” Maggie McNeill says. “Are they simply trying to imply that sex workers are uniquely stupid and incompetent, and therefore unable to do what even children can manage?  Or is this some moronic extension of ‘sex trafficking’ hysteria wherein they fantasize that our ‘pimps’ won’t let us have computers in our kennels?”

And it’s simply not true to say that trafficking victims are absent from the conversation on social media. Everyday Whorephobia, for example, has had trafficking victims tweet through their account.   One of these was Lori, who was coerced into working as a stripper and a prostitute in New Orleans, and now runs the sex-positive website Kink, etc…. In an email to me, Lori said:

I truly feel that utilizing social media and my blog to tell my story will somehow — some way — raise awareness of the struggles that face victims. I also hope that it will help to show how the current laws do not help victims but only criminalize them along with those who are doing consensual sex work. Victims are arrested only to latter be released to those who are forcing them to be in the industry. The laws and society seem to lump everyone into a group of criminals without recognizing that some who are in the industry are forced there by other people, by circumstances, or by poverty.

Social media and hashtag activism are easy to dismiss if you have access to other forums — as Michelle Goldberg did when she wrote about the toxicity of Twitter in a major cover story for the Nation. But where other than social media would people like Lori be able to tell their stories without being filtered by gatekeepers — not excluding gatekeepers like me? Whatever its downsides, Twitter is not toxic when it gives a voice to sex workers, or to other marginalized people. As Lori says, “Any past or present sex worker who shares raises awareness…. No matter how they choose to share, their story will help.”