Feminism's obsession with celebrity: It's time to stop making our pop stars into political icons

Shailene Woodley, Kirsten Dunst, Miley Cyrus and Taylor Swift are not feminists — nor do they need to be 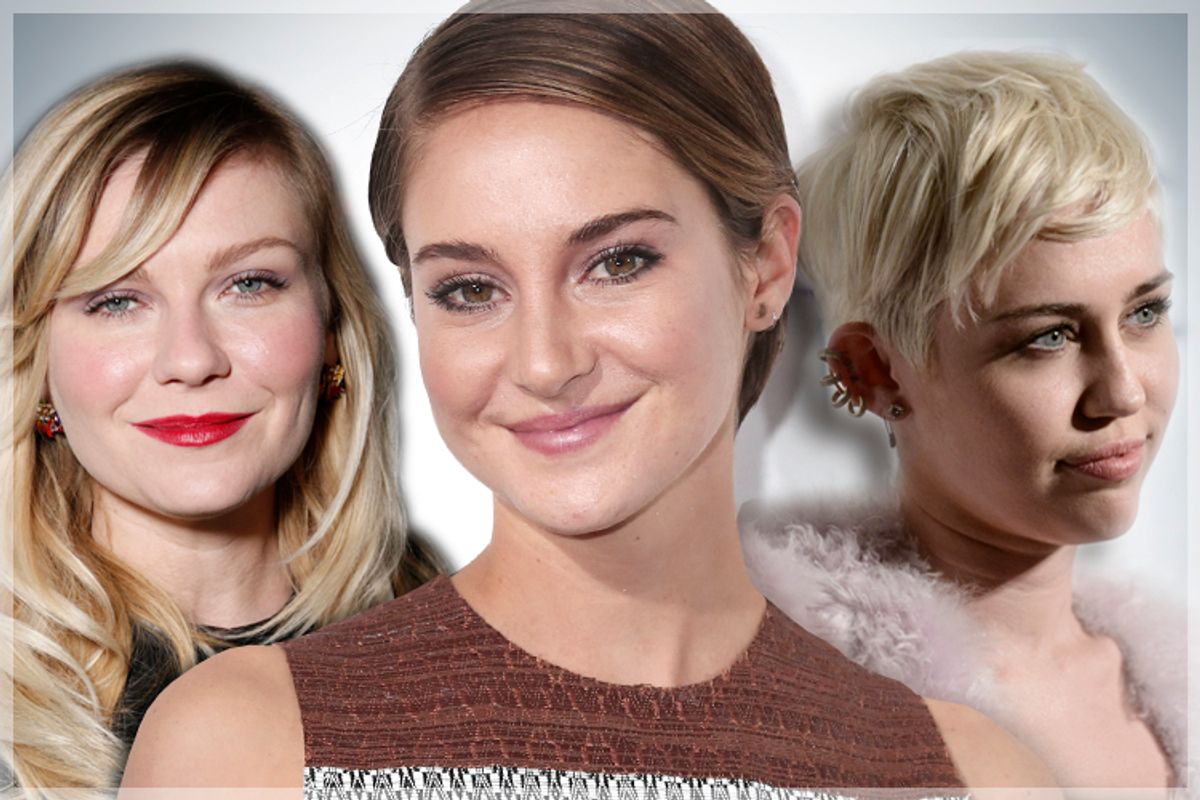 “No,” the actress Shailene Woodley answered recently when asked if she considers herself to be a feminist in the Time interview heard round the blogosphere. Why not? Because “I love men and I think the idea of ‘raise women to power, take the man away from the power’ is never going to work out because you need balance.” The outrage soon followed — “Shailene Woodley Has Some Thoughts on Feminism, and They Are Not Good,” said one headline; “The Shailene Woodley Uproar Shows We’re Getting Celebrity Feminism All Wrong,” read another — in yet another iteration of the “let’s debate a celebrity’s feminist credentials” argument. What no one seems to be asking, though, is why we keep making feminist icons out of our celebrities.

The cycle by now is familiar: Every few months, an interview with a female celebrity goes viral, on the basis of the celebrity’s disavowal of the word “feminist” or conservative approach to gender. Sometimes a pop star is involved — Katy Perry, Taylor Swift and Lady Gaga spring to mind — while other times, it’s an actress — Woodley, now, and Kirsten Dunst and Susan Sarandon before her. Yesterday it was Miley Cyrus, slammed for telling a terrible rape joke and riding an inflatable penis. Tomorrow, someone new will go though this veritable rite of passage.

But why does this keep happening? From a business point of view, it makes sense for all parties involved: the publication that initially publishes the interview is guaranteed page views, the op-eds that follow from all corners of the Internet piggyback on this and the starlet in question has both headlines and an opportunity to distance herself from the hairy-legged feminist stereotype. Maybe she’ll see the light in a couple of months, as Perry did. More headlines will follow. Rinse, repeat.

What’s missing from this equation are the women who don’t star in Hollywood blockbusters or go on world tours following their album release — the women that have, historically, been the focus of feminism. Class becomes a dividing line: what does the woman struggling, say, to afford childcare — the cost of which, the National Women’s Law Center reports, ranges from $3,900 to $15,000 a year — have in common with the Hollywood star who can actually afford nannies? Celebrity feminism is one that seems only to demand that the one percent affix themselves with the label “feminist,” with little regard for the lives of ordinary women who are silenced and ignored globally.

This is not to deny the sexism still pervasive in the entertainment industry. To date, only one woman has won the Academy Award for best director (Kathryn Bigelow, The Hurt Locker, 2008). But none of these “gotcha!” interviews ever seem to care about female producers, female directors or female session musicians. Instead, only a specific type of highly visible woman — the one seen on magazine covers — seems to matter. To pretend that the fate of feminism hinges on a single actress or pop star publicly calling herself a feminist, while continuing to profit off of an industry that rewards women for commodifying their bodies and souls for the pleasures of men, is lip service, not activism.

Why has the celebrity become the focus of so much contemporary feminist energy? As PolicyMic pointed out in its defense of Woodley, “we should also keep in mind that she is a 22-year-old actress — not Gloria Steinem.” Yes, exactly — why are we suddenly so invested in celebrities, not scholars and activists, for our definitions of social movements?

A feminism so focused on celebrity will not provide the answers to these questions. The celebrity’s livelihood, after all, is entirely dependent on how successfully she can sell her audience a myth. Simone de Beauvoir likened the movie star to a modern incarnation of the hetaira; “She yields Woman over to the dreams of man, who repays her with wealth and fame.” Every female celebrity that poses without clothes on the cover of a men’s magazine has a vested interest in preserving the status quo, because her career is based on selling the status quo’s glamor. It is, again, another trap for women, both celebrity and ordinary: we want icons, not human beings — is it any wonder that the celebrity’s answers are always contradictions? The feminist question is simply another example of the impossibilities that we demand from women. Forget the virgin/whore complex: today’s woman must simultaneously prove her apparent agency and independence while continuing to embody an appealingly prostrate version of female sexuality and womanhood. She chooses to do so.

The rhetoric of personal choice has created a feminism that emphasizes sound bites over politics, draining the movement of any sentiment more complex than, “Hooray, women.” “Lifestyle-based feminism,” as bell hooks terms it, suggests “any woman could be a feminist no matter what her political beliefs.” The term is so elastic that any criticism of women can be perceived as a negative: “That’s not feminism,” Selena Gomez responded to a piece of criticism from Lorde concerning the passivity of her lyrics. “[Lorde is] not supporting other women.” Is feminism, then, supporting any action that a woman takes, even if it upholds sexist stereotypes, just because she is a woman?

“We demand an end to all celebrity articles, all articles oriented towards the preservation of youth (implying that age has no graces of its own), and an end to all articles specifically tied to advertising: e.g., food, make-up, fashion, appliances.” Those demands came from a 1970 protest against the Ladies Home Journal, but the same could be said of so many women’s magazines and lady blogs today. The continued focus on celebrities, whose lives are far removed from the daily concerns of so many women, have transformed the feminist dialogue present on sites like Jezebel into one seemingly unconcerned with politics, squandering the huge audience they have built over the years.

Woodley’s misunderstanding of the term “feminist” won’t make or break the movement, but continuing to rely solely on celebrities for our definition of feminism might. What would a publication that ignores the ubiquitous celebrity feminism wars look like? The rest of the demands from Ladies Home Journal protest are strikingly modern: more women writers, more women writers of color, free employee daycare, fair wages, and non-romantic stories.