The man called “Bush's brain,” the American Crossroads impresario, is forced to do anti-Clinton dirty work himself 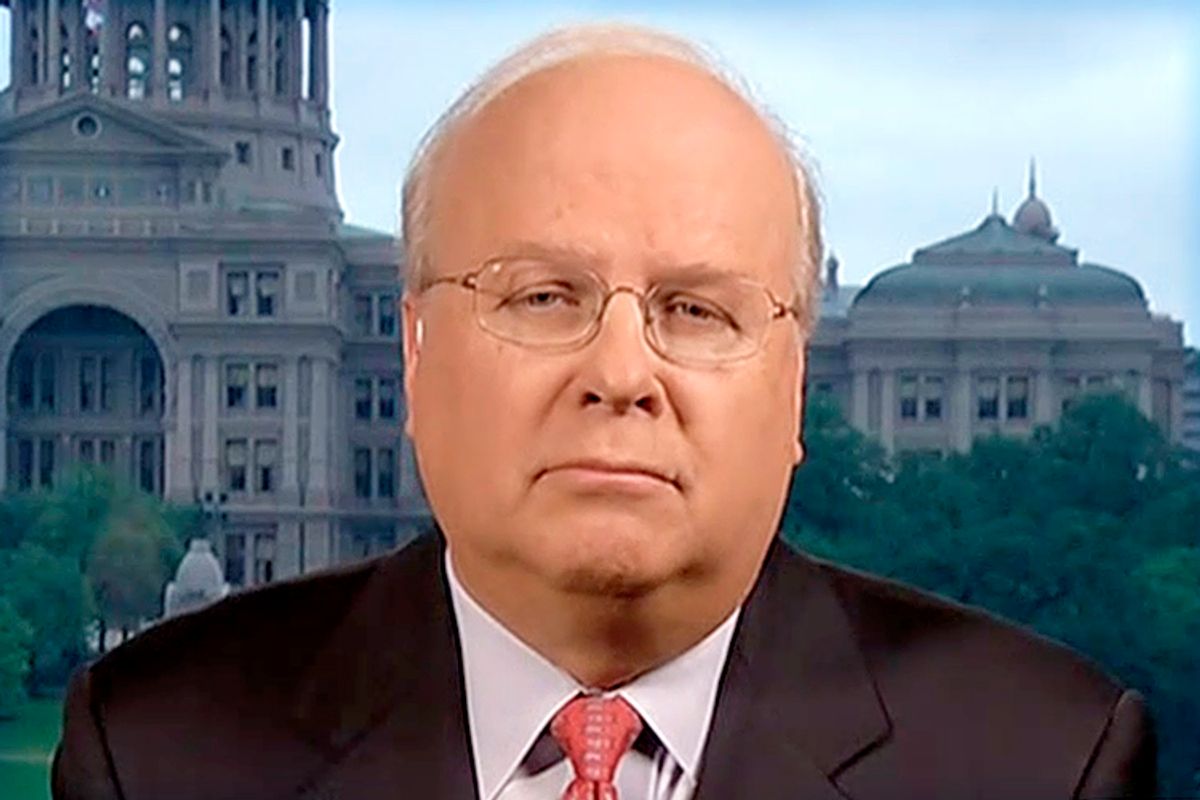 Let’s consider what it says about the Republican Party today that Karl Rove, once known as “Bush’s Brain,” is forced to do his dirty work himself these days. It’s seems a demotion, or a variety of devolution, for the lordly impresario of American Crossroads, the man who rose to power to run presidential campaigns, not be their hit man or their ratfucker (that’s Donald Segretti’s lovely old word for the team of trolls Richard Nixon used to smear and gaslight his enemies).

But it was Rove himself who was quoted by the New York Post suggesting Hillary Clinton might have brain damage, and who made up the fantastic charge that she’d spent 30 days in a hospital at the end of 2012 (she spent three days there). He insists he didn’t use quite the term “brain damage,” but on Fox Tuesday he only dug in deeper, insisting Clinton had “a serious health episode” that disabled her for at least 30 days. Even if -- OK, OK! -- she didn’t spend the whole month in the hospital.

At another time, the Democratic response might have been to marshal doctors’ records to disprove the false claim. Rivals for the presidential nomination might have joined the chorus of faux-alarm. Nothing like that happened. A Clinton staffer told the New York Post, "Please assure Dr. Rove she's 100 percent," adding, "Karl Rove has deceived the country for years, but there are no words for this level of lying." Boom.

White House press secretary Jay Carney was more brutal still. “Here’s what I would say about cognitive capacity, which is that Dr. Rove might have been the last person in America on election night to recognize and acknowledge that the president had won reelection, including the state of Ohio. So we’ll leave it at that.”

Carney was, of course, referring to Rove’s on-camera meltdown when Fox News called the 2012 race for President Obama. Insisting returns from Ohio would prove the call wrong, Rove drove Megyn Kelly into the offices of the data guys responsible for the call, and found them confident in their judgment (of course, they were right).

On Tuesday, Fox’s Bill Hemmer played Kelly’s role, a little bewildered by the way Rove stuck to his claims about Clinton’s serious health issue with little evidence. Hemmer pushed back, noting that Clinton spent three, not 30 days in the hospital, but Rove dug his heels in:

I didn't say she had brain damage. She had a serious health episode and my point was that from, I think it was the 7th of December in 2012 through the 7th of January of 2013, she underwent, first she had apparently a serious virus. They announced then on the 15th of December that she had at some period in the past week fallen. They didn't say when, they didn't say where. She was recovering at home. On the 30th of December she goes in and turns out to have had a blood clot. They won't say where. The next day they say that it is between her skull and her brain behind her right ear. She's in the hospital for four days. She goes home, is back in the office on the 7th and testifies on the 25th wearing special glasses that allow her to deal with the double vision that this episode caused.

My point was is that Hillary Clinton wants to run for president, but she would not be human if this didn't enter in as a consideration. And my other point is that this will be an issue in the 2016 race whether she likes it or not. Every presidential candidate is asked for all of their health records by the New York Times they turn them over — and vice presidential candidates — they turn them over to a battery of doctors and they examine them in detail.

Note that Rove came armed with dates and details about Clinton’s health woes, along with subtle charges that the former secretary of state is hiding something. (She had a blood clot; “They won’t say where.” Oh wait; they said where the very next day.)

That’s the hallmark of the dirty trickster: introduce just enough fact into the story, larded with lies, to get reporters (he hopes) to begin chasing down the details.

On cue Sean Hannity picked up the cudgel, asking on his show last night, “whoever spends 30 days in the hospital these days?" That’s our Fox; debunking Rove in one segment; spreading his lies in another. No doubt some wag at Politico or National Journal (I won’t venture names; the choices are many) is right now preparing a contrarian “Karl Rove is right.”

Of course, it’s not hard to recall when Republicans were minimizing Clinton’s December 2012 health troubles, calling it “Benghazi flu” to make the also-scurrilous charge that she was using her health to avoid testifying about Benghazi. Now the smear is that those injuries were serious enough to disqualify her as a presidential candidate.

We must remember that Rove began his career as a Republican dirty trickster, coming to national attention during Richard Nixon’s notorious 1972 reelection campaign. As John Amato and Dave Neiwert recount in their book “Off the Cliff,” he was the chief executive of the College Republicans, and he made the Washington Post, in a story headlined, “GOP Party Probes Official as Teacher of Dirty Tricks,” for an investigation into a dirty-campaigning seminar he taught young right-wingers. The probe was ordered by then-Republican National Committee chair George H.W. Bush, who quickly cleared Rove of wrongdoing.  Rove would make his son president as payback.

And in his remarkable forthcoming book, “Invisible Bridge,” Rick Perlstein tells us how Rove continued his Nixon support during the Watergate investigation. "Judiciary members’ switchboards were swamped by identically phrased phone calls concerning 'the lynch-mob atmosphere created in this city by the Washington Post and other parts of the Nixon-hating media'; these were scripted by a George Mason University student named Karl Rove and his faux-grassroots group 'Americans for the Presidency.'”

It’s a measure of how far the entire GOP has devolved that Rove has become one of its elder statesmen and is frequently identified as a moderate establishment figure these days, using American Crossroads to beat back Tea Party crazies. But just like his Fox boss Roger Ailes, he’ll always be one of Richard Nixon’s corrupt henchmen. And if he has to do his dirty work himself, so be it.