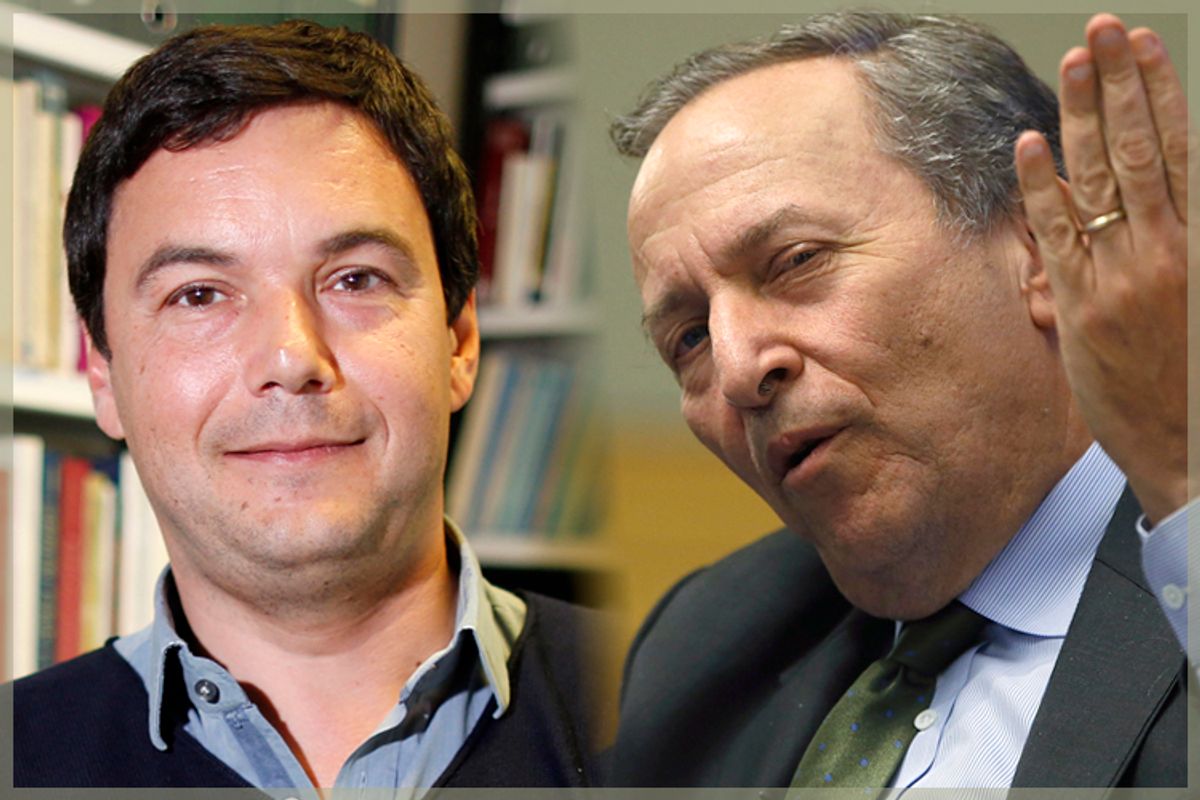 Larry Summers' brand-new review of Thomas Piketty's "Capital in the 21st Century" is a classic example of the back-handed compliment genre. To summarize it as briefly as possible: The book is "a profoundly important contribution," writes Summers, primarily because Piketty's empirical research has established beyond a shadow of a doubt that massively high, and growing, income inequality is a fact. But Piketty's reasons for why this might be happening are wrong, and his proposed solutions (vastly increased progressive taxes imposed internationally) are utterly unworkable!

Nonetheless, the review is a worthwhile read. Just the fact that Summers felt compelled to bring in the heavy artillery is proof enough that Piketty has the attention of the kind of people who've been busily making a mess out of the U.S. economy for the last 20 years (and yes, that includes you, Mr. Summers).

One passage explaining where Piketty is off-base is of particular interest for people who are concerned about the impact of computer automation on inequality. (Emphasis mine.)

Even where capital accumulation is concerned, I am not sure that Piketty’s theory emphasizes the right aspects. Looking to the future, my guess is that the main story connecting capital accumulation and inequality will not be Piketty’s tale of amassing fortunes. It will be the devastating consequences of robots, 3-D printing, artificial intelligence, and the like for those who perform routine tasks. Already there are more American men on disability insurance than doing production work in manufacturing. And the trends are all in the wrong direction, particularly for the less skilled, as the capacity of capital embodying artificial intelligence to replace white-collar as well as blue-collar work will increase rapidly in the years ahead.

Translation: The working man is doomed because robot overlords will take all our jobs.

As New York magazine's Kevin Roose observed on Twitter, "For a guy who has been on several tech boards, Larry Summers sure sounds scared of robots."

(Summers is on the board of Square, an electronic payment service, and Lending Club, a peer-to-peer lending firm. Since 2011 he has also been a special adviser to the Silicon venture capital firm Andreessen Horowitz.)

Huh. Imagine that. Someone smart enough to see that automation contributes to inequality is also smart enough to capitalize on that fact and make a lot of money. Which, if you stop to think about it, is exactly the problem.