The lessons of "The View": That women consume news differently than men, and that a woman's place is in the market 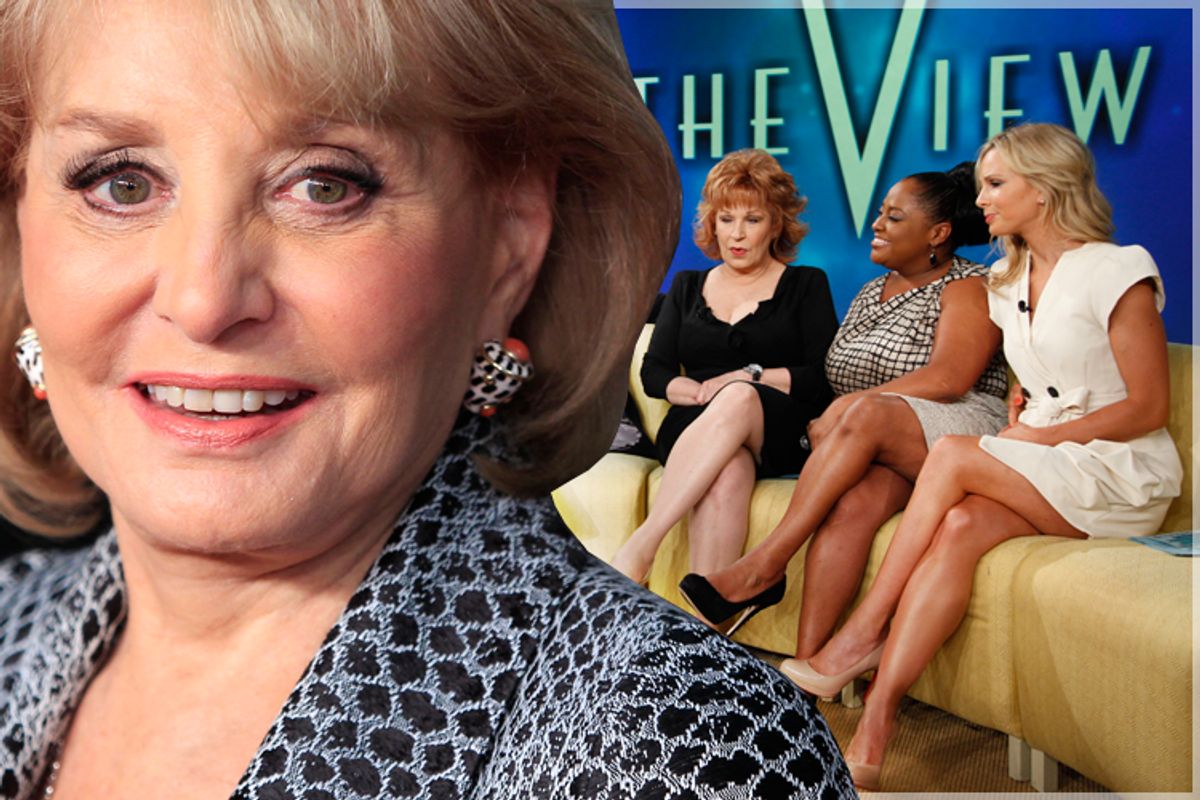 This week, “The View” bids farewell to its retiring creator, Barbara Walters. “She plans to slow down and, as they say around here, ‘take a little time to enjoy the view,’” as one typically on-message sendoff put it (this from fellow ABC reporter Marci Gonzalez). After nearly two decades on the air, the long-running news-lite daytime talk show for women will proceed without Walters. It is unfortunate, if fitting, that this genuinely pioneering female journalist will be remembered for “The View” — a show that did considerably more damage to women in media than most people realize.

From her first big on-air reporting gig in 1956 (covering a sinking ocean liner for “Today”), to the moment she beat out Walter Cronkite for interviews with Anwar Sadat and Menachem Begin in 1977, Walters established herself as a tenacious reporter. She went on to co-host (a title she was the first woman in news to hold) and produce "20/20" for ABC. Her 1999 interview with Monica Lewinsky earned her the title “popular,” too, breaking the record numbers of viewers for any news program.

When “The View” first aired in 1997, the ad campaign presented the program as the legendary journalist’s ultimate achievement, as well as a breakthrough in women’s news programming. “A team of dynamic women of different ages, experiences and backgrounds discussing the most exciting events of the day,” current press materials enthuse. Basically a broadcast revival of the Style sections of newspapers then being derided as antifeminist “pink ghettoes” across the U.S., the setup worked from the assumption that women consume news differently than men. Upon View-ing the show, one gathers that this means: on a couch, with coffee, and only in light bits and bats, freely interspersed with corny jokes of the ilk even a dad would wince at. (That even co-host Whoopi Goldberg tones it down for the show should make us all remorseful.)

When the sex-worker bashing — sponsored by Eight O’Clock Coffee — ended, we were shuffled into a screed against boycotts, which Walters confusingly conflated with sanctions. The co-hosts’ consensus seemed to be twofold: that people should not deny others their god-given right to the market of democratic capitalism, and that individualism freedom, at all times, trumps the right of folks to live free of racist and misogynist behavior. Finally, the otherwise intelligent Diane Keaton was brought in so the co-hosts could assure her that she was beautiful, ply her for details about famous men she’s slept with, and ask why she never married.

Breakthrough for women’s media indeed: Rarely are we offered such a clear neoliberal mandate that a woman’s place is in the market — although not, confusingly, the market for actual sex. This should only be used to advance your career. Or, you know, your news-ish chat show. A segment earlier this spring had co-hosts Jenny McCarthy and Sherri Shepard topless in a segment supposedly about HBO’s “Girls.” Of course it wasn’t. “We want more ratings … Take a little time to enjoy our view,” McCarthy says, stripping the conceit from the stunt’s intentions.

Amid breaking reports on how “Real Housewives” feel about each other really, ridiculous questions about female guests’ hairstyles, and inane flirtations with male guests (Walters famously prefers the show heteronormative) we’ve been offered a spate of products we might enjoy in our hypothetical middle-class homes. As content. Before the commercials. For Walters’ much-lauded guest-fluffing is also the show’s policy toward sponsors. Always the pioneer, her efforts to integrate advertising and editorial culminated early in a 2000 campaign with Campbell’s Soup. In it, pro-soup messages were seamlessly woven into regular banter (since, we’re given to believe, all women break into well-rehearsed, in-key product theme songs whenever food is discussed) — a deal elucidated in a Nov. 14, 2000, Wall Street Journal item. A July 2008 sponsorship from T-Mobile cut other ads out of the show entirely, sadly lengthening the unbearable Hot Topic segment.

A woman’s place is in the market, you see, as both consumer and shill. Never as product — the Paris Hilton pay-for-play scandal and near-constant derision of sex workers makes that clear. (Unless they’re co-hosts: then anything goes.) But brand messaging is key to success, as former co-hosts Joy Behar and Elisabeth Hasselbeck learned. Opinion polls showed Behar leaned too far to the left and Hasselbeck (now a Fox News reader who earlier this month suggested that “female breadwinners” might be a “recipe for disaster”) to the right, and rumor has it both were fired for polarizing audiences. The message to women in media was clear: There’s no room for the opinionated and female-identified in Walters’ world.

Indeed we have Walters to thank for promoting a lack of rigor among women reporters, not only by reviving the crap notion of women’s news in the first place, but for hand-picking hotties with no training (or interest) in journalistic ethics. Not that it’s hurt their opportunities in media! Walters' efforts on behalf of sponsored content — an approach that places her firmly at the top of a list of richest talk-show hosts — helped erode those standards, too.

Take Jenny McCarthy (please!), who in February of last year started writing a column at the Chicago Sun-Times. The former Playboy Playmate has waffled in recent days on her previous, erroneous conviction that vaccines cause autism, but her new gig was big news for the layoff-happy paper. (OK, all the coverage was mocking.) A few months later, the paper fired the entire photography staff amid a slew of other cutbacks that have yet to let up, although McCarthy’s job remains secure.

Many of us female journalists working today were too young to have caught Walters’ rise to power; we saw only the backlash, most famously characterized by "SNL’s" Baba Wawa.  The character mocked Walters’ slight speech impediment, as well as her femininity and gender; it was a generous portrayal only in that it offered consistent opportunities for female comedians. If it was odd to watch a dude-heavy comedy show openly mocking a famous woman in a bit that gave Rachel Dratch, Cheri Oteri, Nasim Pedrad and Gilda Radner rare high-profile spots on the show, it was equally strange to watch the news itself and see the same hypermasculine dynamic playing out, with only the oft-maligned-but-somehow-still-bland Barbara Walters to shift the stats.

This may, at the time, have been the ceiling for women in media. It didn’t have to stay that way, but by then Walters was calling the shots. The insider-softball chumminess that played so well with the boys in the newsroom need never have leaked into the female-oriented syndicated TV establishment. When it did, it was further dumbed down — to the point of straight-up sycophancy. “The View” may seem harmlessly fluffy, but it changed journalism, and women’s roles in it, forever.

The cultural significance of Walters’ self-mocking stint on "SNL" last week was quintessential Walters: pandering, anecdotal, self-effacing —  but commanding. After touching on some of her most memorable career gaffes, she ended with the suggestion that young journos shouldn’t be afraid to ask the tough questions, “like, ‘your place or mine, Brokaw?’”

It’s fitting that Walters will be remembered for the scripted quip, as well as for “The View.” Both underscore, and celebrate, women as sex objects. And both appropriately make jokes about women’s opportunities in the newsroom, while concealing five decades of hard work.