As everyone from Monica Lewinsky to Solange knows all too well, our appetite for gossip has gotten way too big 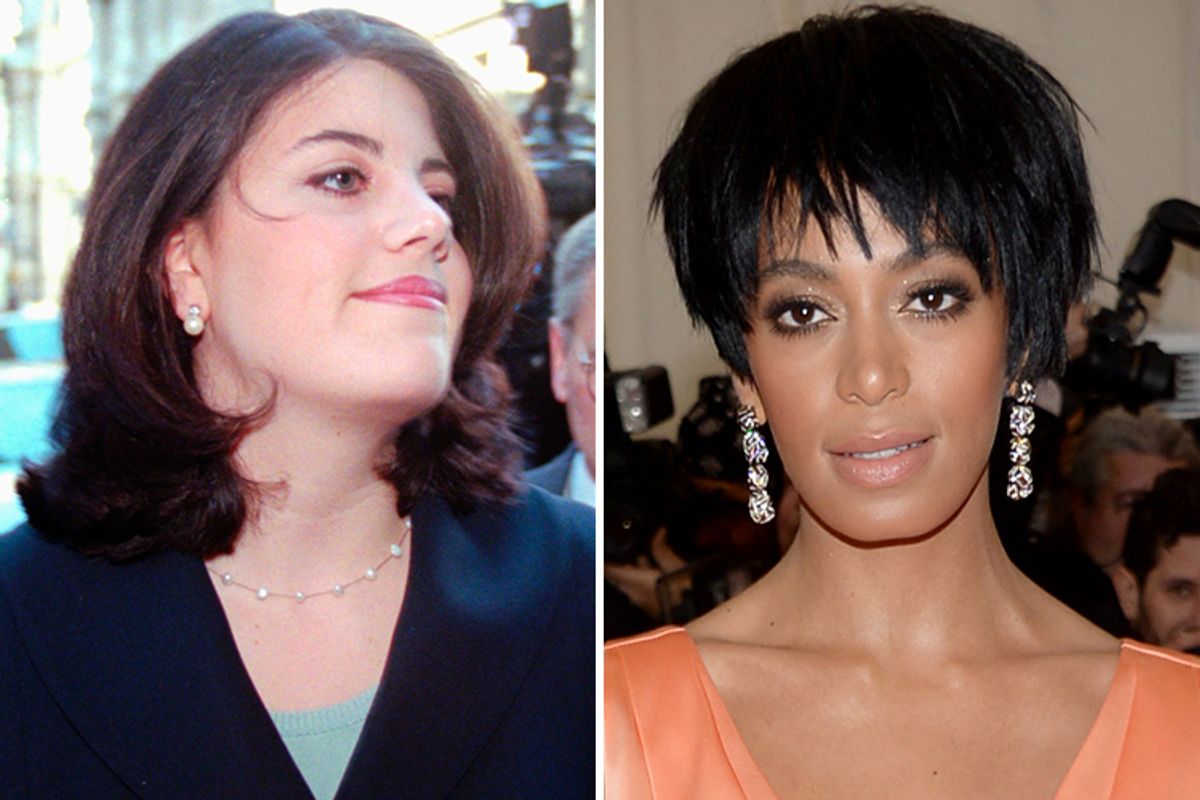 When the celebrity gossip website TMZ published an elevator surveillance video this week showing Solange Knowles, Beyonce's sister, physically assaulting her brother-in-law Jay Z, the episode went viral, with the usual array of websites and news organizations posting their own reports. But while many people were eager to glimpse yet another famous person behaving badly, there were many others for whom the leaked video served as a nagging reminder of one of the most troubling questions of our time: Wasn't this a private moment? And shouldn't privacy be protected?

So fundamental is a human's need for privacy that the very first Universal Declaration of Human Rights (created by the United Nations General Assembly in 1948) provided that "[n]o one shall be subjected to arbitrary interference with his privacy, family, home, correspondence, nor to unlawful attacks, on his honour and reputation."

These rights, as well as the right to "protection of the law against such interference or attacks," are also established in several other significant international treaties and the European Union’s Charter of Fundamental Rights, and form the bedrock principles of human rights law the world over.

In the United States, however, laws protecting privacy are not broad or unequivocal.

But not every state recognizes all of these infringements; and different states have different definitions or standards of what constitutes an infraction.

In March, for example, Massachusetts joined Hawaii, New York, Virginia and Washington in enacting an official ban on "upskirting" (or the surreptitious taking of photos or video inside a person's clothing) just one day after the state's highest court ruled that a man who used his cell phone to photograph up women's skirts on Boston's subway in 2010 did nothing illegal-- because the law applied only to victims who are nude or partially nude (and the subway riding victims were all dressed). According to Holly Kearl, author of "Stop Street Harassment: Making Public Places Safe and Welcoming for Women," upskirting in public places is currently legal in Alabama, Nebraska, and Oregon.

Some federal statues regulate privacy as it relates to specific industries, like health care and banking. And while the U.S. Constitution gives a few nods to privacy (the Fourth Amendment protects against "unreasonable searches and seizures" and the Fourteenth Amendment ensures "liberty"), it more directly emphasizes the right to free speech, free expression, and the freedom of the press, which means anyone considered a public figure must tolerate more assaults on their privacy and dignity than the average citizen.

These limits on privacy are a good thing when it comes to protecting democracy: Citizens can criticize elected leaders without fear of the kind of persecution common in Iran, and the press can report on events and occasionally even make mistakes without the fear of being jailed as they might be in China.

But in terms of human dignity, the gaps in privacy protection have become increasingly troubling as portable devices infiltrate further and further into spaces that were once private. The rise of the Internet has only expanded the public's already voracious appetite for images and information about celebrities. It also allows past mistakes and old information to live on forever. Meanwhile, social media has the ability to transform each and every last citizen into a momentary celebrity -- what the law considers a "limited public figure" -- faster than you can type “cute kid” and "YouTube."

While privacy advocates have lately focused on informational privacy (i.e. trying to limit the mass collection of personal data by government), celebrities in Hollywood are on the front lines of asking Americans to reconsider a more basic form of physical privacy.

Few people express sympathy for those so celebrated that cameras track their every move. But the widely accepted bromide, that celebrities "should know what they are getting into when they become famous," increasingly fails tests of logic. How does wanting to be known equate to wanting absolutely everything about you to be known? And how does desiring to be famous equate to wanting to share every last movement at every and any possible moment and location -- of either you or your family members?

Not a single California legislator disagreed with Halle Berry when she testified last year in Sacramento on the matter of privacy. "When it comes to my children, or my child," Berry said, "when they are in fear of leaving the house, when they are suffering from nightmares, and feeling that they cannot move in the world in a free and safe way, that is when as a mother, I have to stand up for the rights of my children."

(Among the examples of behavior Berry described as unacceptable was being cornered with her family while trying to leave Los Angeles International Airport by approximately 50 photographers with flashes, causing her young daughter to ask “Mommy, are they going to kill us?’)

After testimony from Berry, as well as law enforcement officers whose families were targeted last year in Christopher Dorner’s horrific killing spree, California State Senate Bill 606 received unanimous support and was signed into law in September, increasing the penalties for the intentional harassment of a child because of their parent's employment.

But while this new law makes clear that harassing children based on their parents’ profession is a punishable crime, it is far from imporous: The law applies only in California, covers children only 16 and under; and as the actors Dax Shephard and Kristen Bell quickly realized at a post-legislation meeting of Hollywood parents, could do little to protect infants and toddlers, as enforcement requires proving the harassment caused emotional distress -- something difficult, if not impossible, to do when it comes to, say, a 1 year-old.

Maybe you still don’t care about the plight of celebrities. But last week, no less a nobody-turned-celebrity than Monica Lewinsky asked us to reconsider -- specifically by invoking the memory of Tyler Clementi, the Rutgers freshman who, several days after learning his roommate used a webcam to broadcast an intimate encounter with another student in 2010, decided to jump off the George Washington Bridge and end his life.

Lewinsky’s qualification as a messenger for privacy as a human right? She describes herself, correctly, as "possibly the first person whose global humiliation was driven by the Internet."

Enough reasonable people are concerned about the harmful effects of Internet-amplified humiliation that it has given rise to a concept called “the right to be forgotten,” which was at the heart of Tuesday’s landmark decision by the highest court in the European Union requiring search engines like Google to allow people to erase links to web pages after a certain amount of time.

But whereas laws in Europe traditionally favor privacy rights, in the U.S. we have a different, more complex set of priorities.

While there are legal precedents in the United States for allowing true information to be hidden from public view-- juvenile arrest records get expunged; old debts omitted from credit reports--erasing information so directly clashes with First Amendment protections that, according to Justin Brookman, Director of Consumer Privacy at the Center for Democracy & Technology, it is unlikely to ever gain traction in the U.S.

Alas, no matter how many regulations are passed, there might never be enough to cover all the privacy conundrums of our digital age. And so when a leaked surveillance video is broadcast, or a magazine publishes a photograph of celebrity's child eating ice cream, we are forced to consider something more essential than law: our basic social mores.

The actress Sarah Jessica Parker recently took up the cause of public civility when she refused to allow a demeaning comment on Twitter to exist unaddressed. "Your anonymity doesn't diminish your outrageous and vulgar tweet," she replied to a particularly offensive social media detractor.

The actor Alec Baldwin similarly encouraged New Yorkers to rethink their downward spiral of discourtesy in his heartfelt, though admittedly scattered piece in New York magazine in February.

"It used to be you'd go into a restaurant and the owner would say, 'Do you mind if I take a picture of you and put it on my wall?' Sweet and simple," Baldwin said. "Now, everyone has a camera in their pocket. Add to that predatory photographers and predatory videographers who want to taunt you and catch you doing embarrassing things." Sure, Baldwin may not himself be a paragon of public civility. His assessment of how technology has changed public life is nonetheless astute.

In the age of portable digital devices, instantaneous global transmission and an inherent human appetite for the intimate details of others, everyone now is a potential victim, and the respect afforded to celebrities will be the same respect we, and our children, will receive if and when our 15 minutes arrive.

The difficulty in protecting privacy might seem a problem born of our modern age, but it has been wrestled with for centuries. In December 1890, then-future U.S. Supreme Court justice Louis D. Brandeis published a now-famous article in the Harvard Law Review with his colleague, Samuel D. Warren in which he stated his belief that for Americans, “the right to be let alone” or to be free in “their beliefs, their thoughts, their emotions and their sensations” was nothing less than “the right most valued by civilized men.”

The impetus for his concern? The growing threat posed by portable cameras and yellow journalism.

You can watch the Solange video if you want. I won't judge you. But if you want to protect your privacy, it's time to start protecting others and leave sensationalism and gossip where it belongs — out of the mainstream.

Julie Scelfo is a freelance journalist whose work appears in The New York Times.