Georgia candidate for Senate says something entirely obvious and reasonable. Here's why it will never fly 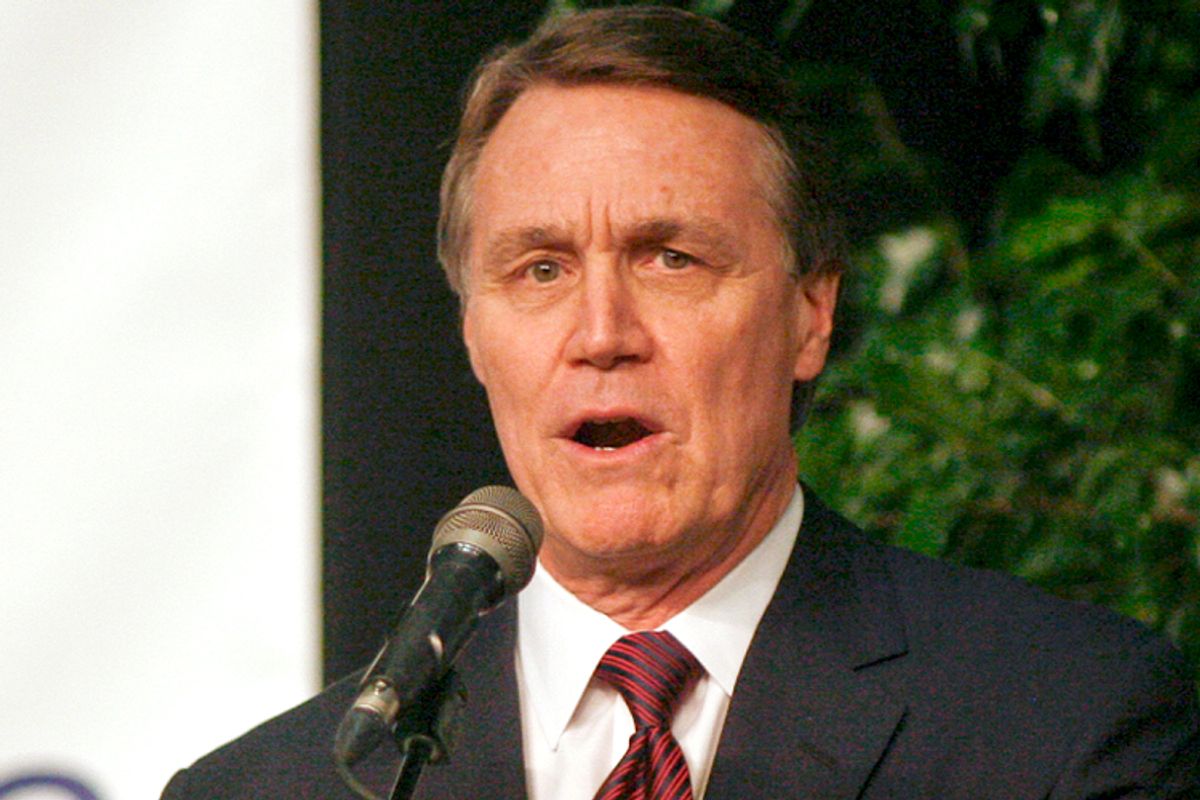 It has always been more than a little ironic that Republicans were able to brand the year 1984 as "Morning in America," but never let it be said they aren't good at marketing. Thirty years ago this summer, Ronald Reagan was cruising to a second-term victory on the back of an improving economy and a strong personal connection with the people, some of it forged in the wake of a serious assassination attempt. And it was one of those years when the Democrats, perhaps sensing the inevitability of loss, nominated a very good man and a very bad presidential candidate: former Vice President Walter Mondale.  He is best remembered for a fateful promise in his nomination speech, a promise that evoked a gasp from every political professional of both parties the minute he said it:

He won't tell you. I just did.

He lost in a landslide. Perhaps it wasn't fair to blame that promise for his loss, but the Republicans certainly spun it that way and Democrats were hardly willing to refute the charge. The lesson was so obvious that when Reagan's Vice President George Bush made his nomination acceptance speech in 1988 he ostentatiously promised the opposite:

He won easily. But when he cut a deal with Democrats in 1990 to raise taxes to close the deficit he sealed his fate as definitively as Mondale had back in 1984. A young whippersnapper by the name of Newt Gingrich organized the GOP back bench and they never let President Bush forget it. Despite a sky-high approval rating during the first Gulf War, the president lost in 1992. Raising taxes was now not only considered a very risky move for Democrats, it had become the ultimate act of apostasy for Republicans.

In 1993, President Clinton managed to pass a tax increase with one vote in the House of Representatives, the result of which was a midterm blood bath that turned the House over to Republican rule for the first time since 1952 and Newt Gingrich became the King of the World. Once again it was widely assumed that this electoral loss happened because the majority had stepped on the third rail of tax hikes. From that point forward the only way anyone would willingly bring up the "t-word" would be to talk about how much they would cut them.

George W. Bush had learned that lesson from his daddy's experience and was also lucky enough to inherit a projected surplus from which he could generously start throwing money around to his rich friends. As he sagely observed:

It's your money. You paid for it.

He managed to pass a massive tax cut only hobbled by the necessity to "sunset" the cuts so as not to be seen exploding the deficits 10 years hence. This effectively changed the fight (to the extent there had even been one) from the heresy of raising taxes to "allowing the Bush tax cuts to expire." Not that the Republicans were any less hysterical at the prospect. It was a heavy lift, put off more than once, but the Democrats under Barack Obama were able to restore some of the 1993 Clinton tax rates in 2012. (Sadly for liberals all the money went to pay down deficits instead of any new programs to help real people in the middle of an economic crisis.)

So, taking all that history of the last three decades, what can we make of this Republican fellow named David Perdue running for the Senate in Georgia? Is this the beginning of a sea change on the subject?

In a conversation with the Macon Telegraph’s editorial board released Tuesday, the multi-millionaire businessman did not offer the categorical refusal to raise taxes that is now customary among Republican candidates.

“Is it better to try to get out of the ditch by curbing the growth of spending or increasing revenue?” an editorial board member asked.

“And that’s a euphemism for some kind of tax increase, of course,” the interviewer noted.

Perdue laughed and explained, “Well here’s the reality: If you go into a business, and I keep coming back to my background, it’s how I know how to relate is to refer back to it — I was never able to turn around a company just by cutting spending. You had to figure out a way to get revenue growing. And what I just said, there are five people in the U.S. Senate who understand what I just said. You know revenue is not something they think about.”

Ed Kilgore speculates that this is a sign of Perdue's inexperience and wonders if his rivals will pounce. He's being polite. While it may be true that the Obama administration was able to reverse some of the Bush tax cuts (against the will of the GOP) he knows very well that a Republican running on raising taxes has just invited the screeching harpies of Dante's Inferno to descend upon his campaign and leave nothing behind but bleached, white bones. And so it goes:

There is literally nothing more sacred to modern conservatism than the absolute commitment to cutting taxes. For a Republican to even slightly suggest raising them in any context whatsoever is like declaring that God is dead. Millionaire or not, David Perdue's campaign is dead too.