The talk-show host and music industry insider has a detailed Solange theory, and says it all on air 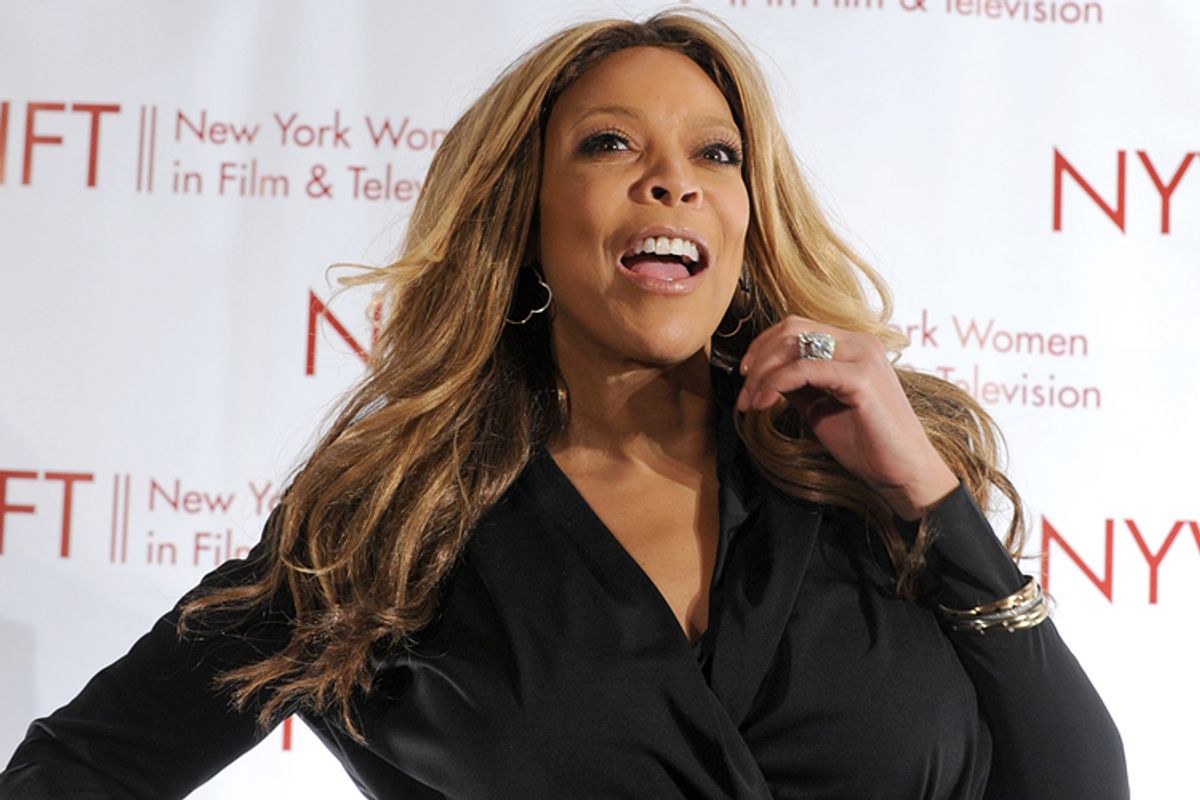 In the aftermath of the scandal over Solange Knowles hitting her brother-in-law, Jay Z, in an elevator after the Met Gala, the talk-show host Wendy Williams has had one of the biggest weeks of her career -- and proven in the process just how unlike her contemporaries she is.

Williams, earlier this week, strode into the wilderness of uncertainty surrounding the grainy, mute surveillance video of Knowles, her sister Beyoncé and Jay Z, and boldly stated her opinion -- something of a rarity in daytime talk, not least because she's so deliciously close to libel. The host claims "the legal team is going crazy with the alleged button," referring to her tacking on "allegedly ..." to her speculation that Solange has a history of acting out violently and that Jay Z had groped the designer Rachel Roy.

In all, Williams' grand theory seems to be that Jay Z and Roy have a romantic history and that the rapper too openly acted it out at the Met Gala after-party, enraging Solange. Both the message and the style are totally unfamiliar in this format -- on a standard-issue talk-show set, Williams is gleefully parsing the day's gossip in the way real gossip-obsessed fans do, with a slight advantage. She's a longtime industry insider who's actually been to the sort of parties where music superstars congregate.

When hosts of other daytime talk shows express opinions at all, they're generally about universally derided celebrities, as in the "Hot Topics" segment on "The View," during which departing co-host Barbara Walters was always quick to cut off any conversation that got too insulting about a well-liked star. But more commonly, hosts will steer clear of this sort of thing altogether in favor of sunny generalities. (Ellen DeGeneres at least does a comedy monologue, but "The Queen Latifah Show," for instance, is most impressive in the way it reveals its host's ability to be appealing while saying absolutely nothing.) One doesn't want to ruin access to a potential future guest by making wild claims about them on-air.

Williams, whose guests are generally not as famous as Beyoncé but might be comparable to Solange, has no such fears. She's at the comfortable level of not being worried about spoiling access, because her interviews aren't the point of the show, anyway. It's her manic vamping when she's not sharing the spotlight -- pretending to grope a producer to demonstrate what she believes Jay Z did, adjusting her wig, comparing herself to Angela Lansbury's "Murder, She Wrote" character -- that's worth watching. Her tone has changed over time, but the sense that, unlike the staid professionals whose shows have higher budgets, she's more than anything an obsessive fan carries through.

Indeed, the general lack of concern for access on "The Wendy Williams Show" makes sense given its host's professional trajectory; Williams was for many years a radio DJ who aggressively covered pop and hip-hop music. Williams, in those days, was caustic rather than warm (her catchphrase, "How you doin'?," which is now just a greeting, began its life as a way to mock stereotypically "gay" speech styles). She was also among the most serious about the most frivolous, pursuing aggressively every dangling thread on pop-culture scandals too internecine for most to follow. Her famous radio interview with Whitney Houston, for instance, was clearly the result, on Williams's part, of serious research and thought.

In radio, perhaps, deep and broad knowledge and an aggressive willingness to share it can help get guests booked -- no one wants to do an interview with someone who doesn't know their work. But, paradoxically, moving to TV has meant that Williams' potential guests have been somewhat limited; she's not booking Whitney-caliber guests, the way her sunnier (and, yes, better-rated) counterparts do. Her willingness to go deep and go long about what she's learned about the music industry over the years, though, is a happy consequence of just how little's at stake for her, so long as she avoids getting sued by continuing to say "allegedly." For now, "The Wendy Williams Show" and its willingness to go into obsessive detail about celebrity gossip remains among the best things on during the day. After all, if you're going to watch something stupid, it may as well be smart about its stupidity.