Katherine Heigl's overdue comeback: Why her haters are wrong 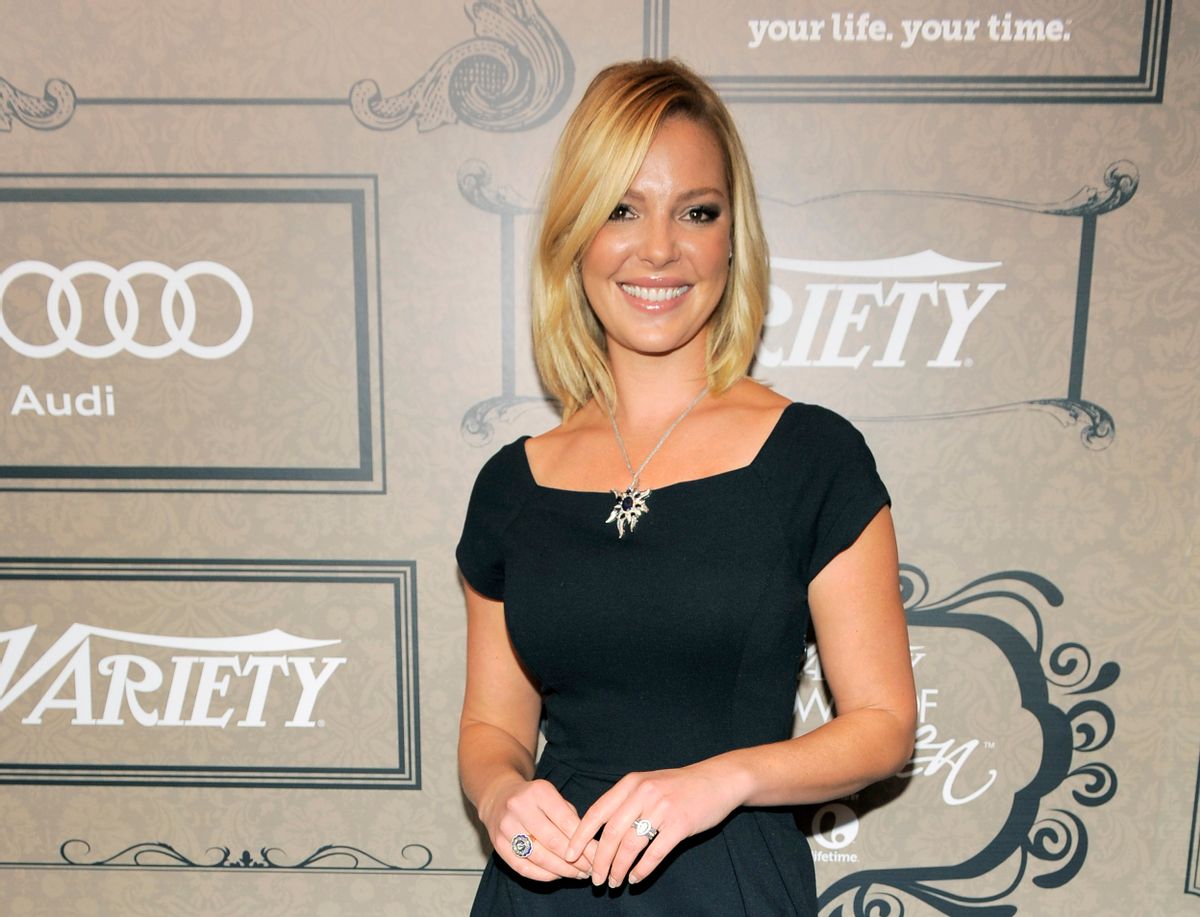 FILE - In this Oct. 5, 2012 file photo, actress Katherine Heigl poses at Variety's 4th annual Power of Women event in Beverly Hills, Calif. Heigl has sued Duane Reade Inc., saying the company is using a picture of her leaving one of its pharmacies in its promotional materials. The 35-year-old who acted in the television series "Greys Anatomy" and in movies including "Knocked Up" and "27 Dresses" is seeking at least $6 million in damages. The lawsuit was filed Wednesday, April 9, 2014 in federal court in Manhattan. (Photo by Chris Pizzello/Invision/AP, File) (Chris Pizzello/invision/ap)
--

Katherine Heigl is coming back to network TV -- and it's both a triumphant return and the end result of a years-long P.R. disaster. Fans of Heigl have a lot to look forward to in "State of Affairs," in which she plays CIA agent Charleston Tucker (sure!); it's her first TV role since she left "Grey's Anatomy," Emmy in hand, to pursue a movie career. For her detractors, the waning of Heigl's movie career feels like comeuppance -- but is that fair?

Heigl was the breakout star of "Grey's Anatomy" even before she appeared in Judd Apatow's smash hit "Knocked Up" (in a role she landed after equally polarizing star Anne Hathaway turned it down). Her stratospheric success was where the trouble started, with a Vanity Fair cover story -- quite the coup! -- revealing that she thought "Knocked Up" was "a little sexist" and "paints the women as shrews."

Well, "Knocked Up" did save most of the jokes for the slackerish men, and presented the women characters as obstacles to happiness ... but still, the framing of Heigl as ungracious and ungrateful was hard to shake off, not least because Leslie Mann, Apatow's wife and a "Knocked Up" costar, defended the film in the press: "I kind of don't know what she was talking about. I'm an actress reading scripts and I've seen what's out there and it's slim pickings." Such slim pickings, indeed, that Heigl's subsequent films included ones whose misogyny was far worse than anything in "Knocked Up," like the grody 2009 "Ugly Truth," in which Heigl really does play a "shrew" eventually tamed, or the simply dumb "Life as We Know It," from 2010, in which Heigl's life is changed for the better by having a child thrust upon her.

Heigl has an admirable openness with her opinions -- ones that reflect a certain kind of idealism regarding the way the industry should work. She mused openly about the undertones of "Knocked Up" in a manner that got read as lambasting Apatow personally; she complained that her work hours on "Grey's Anatomy" were exhausting without acknowledging they had been staggered to allow her to shoot movies, and withdrew herself from Emmy consideration because she felt the writing wasn't strong enough. (She eventually left "Grey's Anatomy," which is still a moderate hit.) Sure, for a while in 2009 and 2010 it seemed as though Heigl was perpetually breaking a silence, but somehow men seem to be able to speak openly about the stresses of movie and TV sets without getting bashed in the press. Her "Knocked Up" costar Seth Rogen, for instance, candidly criticized the style of his "Green Hornet" director Michel Gondry and called the experience "a fucking nightmare." No one is calling him ungrateful for the opportunities or closely scrutinizing what future roles he takes to see if they meet his own criteria. It's just part of life -- sometimes things don't work out.

And, indeed, Heigl's idealism -- movies ought to be politically acceptable in terms of gender equity, work experiences ought to be meet some remarkable standard for positivity and we ought to talk about what doesn't work in public -- eventually collided with her pragmatism. After two public apologies or explanations on magazine covers, Heigl has effectively gone quiet for years, even though the interest in her as a public figure, if not an actress, is certainly still there. She doesn't work much except for in NyQuil ads that got her mocked in the Hollywood press and in an indie that attempted a crowd-funding campaign to afford a release (it failed). "I haven't made that much in the past few years," Heigl told a paparazzo.

She's back on the horse, at least; one imagines that "State of Affairs" will provide, for a time, steady financial security, if not the inflated paychecks Heigl used to get, and that in keeping with recent practice Heigl's own press tour for the show will be muted. But the outsize Schadenfreude around her, if a recent "Saturday Night Live" joke about her unemployability is any indication, will go on no matter what she says at this point. It's a bit baffling, the degree to which Heigl's haters feel they are supporting a political goal.

Heigl has spoken fairly gracelessly in the past, sure. But isn't hers the sort of ambition and intellectual engagement we prize in women in every other field of endeavor? If Heigl is to be a punch line, so be it -- but even though not everything she says is artfully phrased, she's provocative. She makes life on a very boring beat deeply interesting. It'd be a shame if she got fired from public life altogether. Hopefully "State of Affairs" runs long enough that Heigl can tell us exactly what she thinks of her character. All the better, too, that it's on TV -- this way, an actress whose haters take such pleasure in her existence, as well as the rest of us, will see her every week.