Jon Hamm fizzles in "Million Dollar Arm," Cranston is an accessory in "Godzilla"--we're a long way from Clooney 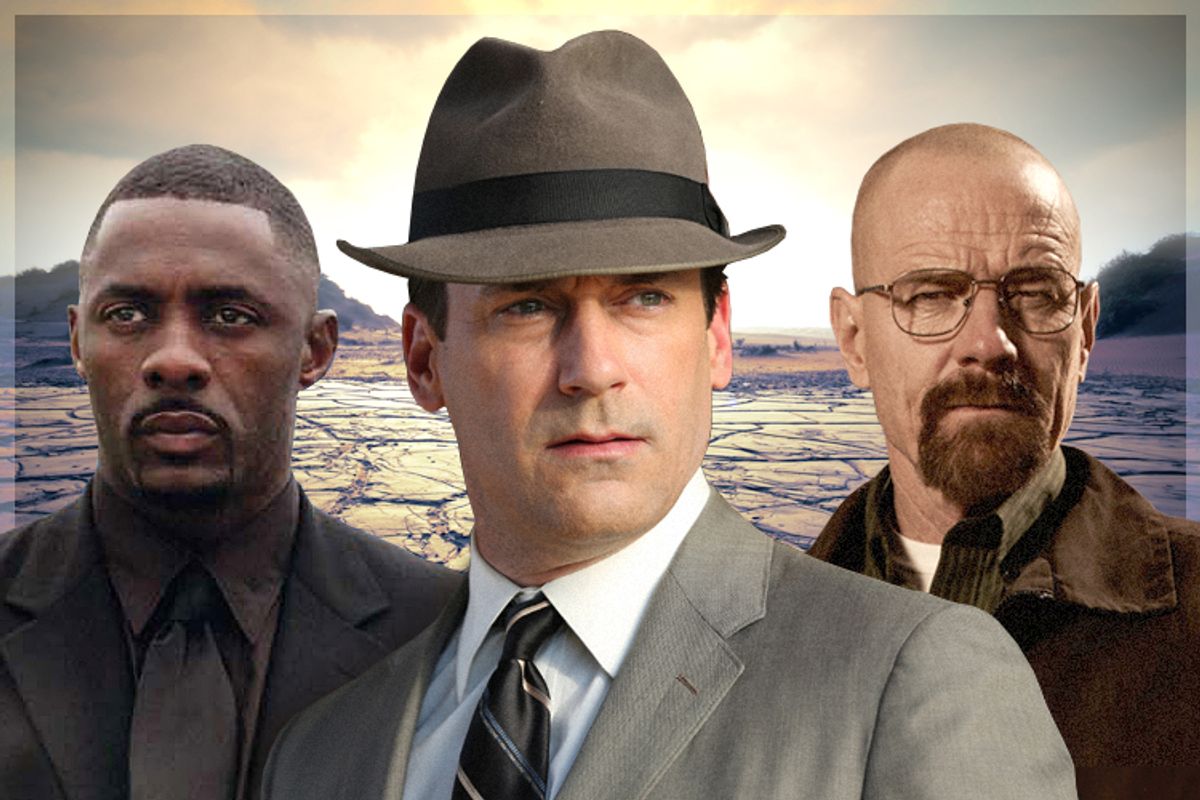 Sure, he's famous, and blessed with a jawline that's the envy of all who watch prestige cable dramas. He's also about to headline his first movie, with a starring role in "Million Dollar Arm." But, as "Mad Men" continues its long farewell march, what should be a celebratory moment for Hamm is looking like a strangely precarious one. Hamm's current Vanity Fair cover profile -- a coup for any actor -- is premised on the question of what Hamm will do once "Mad Men" ends. "Is there life after Don Draper?," the cover asks. (Sorry, Jon Hamm's publicist!) And "Million Dollar Arm," in which he stars as a sports agent who travels to India to pursue cricketers, surely won't move the needle much for Hamm. The reviews, in aggregate, have been tepid (Salon critic Andrew O'Hehir described it as "too obviously trying to" mimic "Moneyball" and "The Blind Side"), and it's unlikely to do much business opposite the first weekend of "Godzilla."

This weekend's box-office showdown between underdog "Million Dollar Arm" and behemoth "Godzilla" would seem to point out one shortcoming of the waning Golden Age of Television: It's not producing enduring stars. Hamm has shone in small, non-"Mad Men," comic roles on TV ("30 Rock") and in movies ("Bridesmaids"), but so far he hasn't broken through, or, better yet, broken away from his character Don Draper. Meanwhile, this weekend's would-be box office smash "Godzilla" features Bryan Cranston, né Walter White, but it can't really be said to "star" him; Cranston's Emmy-bedecked acting talent might be a special effect of its own, but it pales in comparison to a giant lizard, not least because Cranston is only playing a supporting role and has seen his potential promotional energies consumed by his Broadway play. If television has become, since "The Sopranos," America's preeminent art form, it's been a pretty closed circuit. Why aren't our best actors doing movie work that's worthy of them -- and why aren't they becoming movie stars in the process?

Whatever happens with "Godzilla," Cranston can commiserate with Idris Elba, the "Wire" breakout who wasn't really blamed for 2013's "Pacific Rim" underperforming but wouldn't have been credited with its success, either. Elba, a strangely marketed Mandela biopic last winter aside, has mostly stuck to TV post-"Wire." The late James Gandolfini was struggling to find a foothold in movies for years post-"Sopranos," while his TV wife Edie Falco has stuck to the small screen with "Nurse Jackie." January Jones, of "Mad Men," has seen her "X-Men" role cut out of the upcoming sequel, while her "Mad Men" costars, like Elisabeth Moss and John Slattery, barely work in mainstream movies at all. "Homeland" star Claire Danes, previously a movie actress, almost retired from acting in favor of interior design before she regained a foothold in series TV; two Best Drama Actress Emmys later, she has no upcoming projects planned, except for season four.

This isn't necessarily a bad thing -- but it is a change. In the days of broadcast-network hegemony, it was presumed that all TV stars were aspiring movie stars, not unlike the way the U.S. Senate contains 100 people who mostly want to be president. George Clooney, a star with the same throwback look and true charisma as Hamm, didn't start his movie career (with one Bat-sized exception) doing franchise fare or anything too cheesy. David Caruso and Matt LeBlanc are among those who flew too close to the sun, but we remember the successes: Clooney, a few "S.N.L." folks, and Jennifer Aniston (sort of), with Bruce Willis and John Travolta before them. Television has, historically, acted as a farm team for the movies, and as recently as Shailene Woodley (imported from ABC Family purgatory into an Alexander Payne film in 2011, before "Divergent" stardom), it's worked.

Maybe the problem is that, in our antihero and -heroine moment, TV stars can be idiosyncratic in a way movie stars can't. Jon Hamm famously suffered throughout a lackluster acting career before the opportunity to play a Brylcreemed '60s throwback came along. Bryan Cranston is a character actor, not a natural leading man. Steve Buscemi, Kerry Washington and the devious duo of Kevin Spacey and Robin Wright are among stars the movies left behind. The old TV-to-movies trajectory has been working in reverse for so long that it's no longer news, but movies-to-TV is coming to seem like a trajectory that ends at a cul-de-sac.

As TV has gotten better, movies have accelerated in exactly the opposite direction -- that actors as demonstrably good as Elba and Cranston are taking supporting roles in monster serials elevates those movies a bit, but just shows how few options exist for them. The same goes for seeing an actor as good as Hamm reheating old sports-movie formulas. The more legendary an actor's TV role becomes, the more constrained his onscreen options are. How could a Cranston or a Hamm take on another series role after being so indelibly identified with one great, multi-year performance? The movies seem like the next step, but the options there are limited. As an audience, we can feel lucky we got to spend these years with them, perhaps, and mourn the era in which Hollywood film was more receptive to the sort of midbudget movies that would let stars like Hamm and Cranston shine.