Don't cry for Condi! Why students were right to scuttle her commencement address

When Rutgers students got her commencement speech canceled, critics went nuts. They're missing some basic points 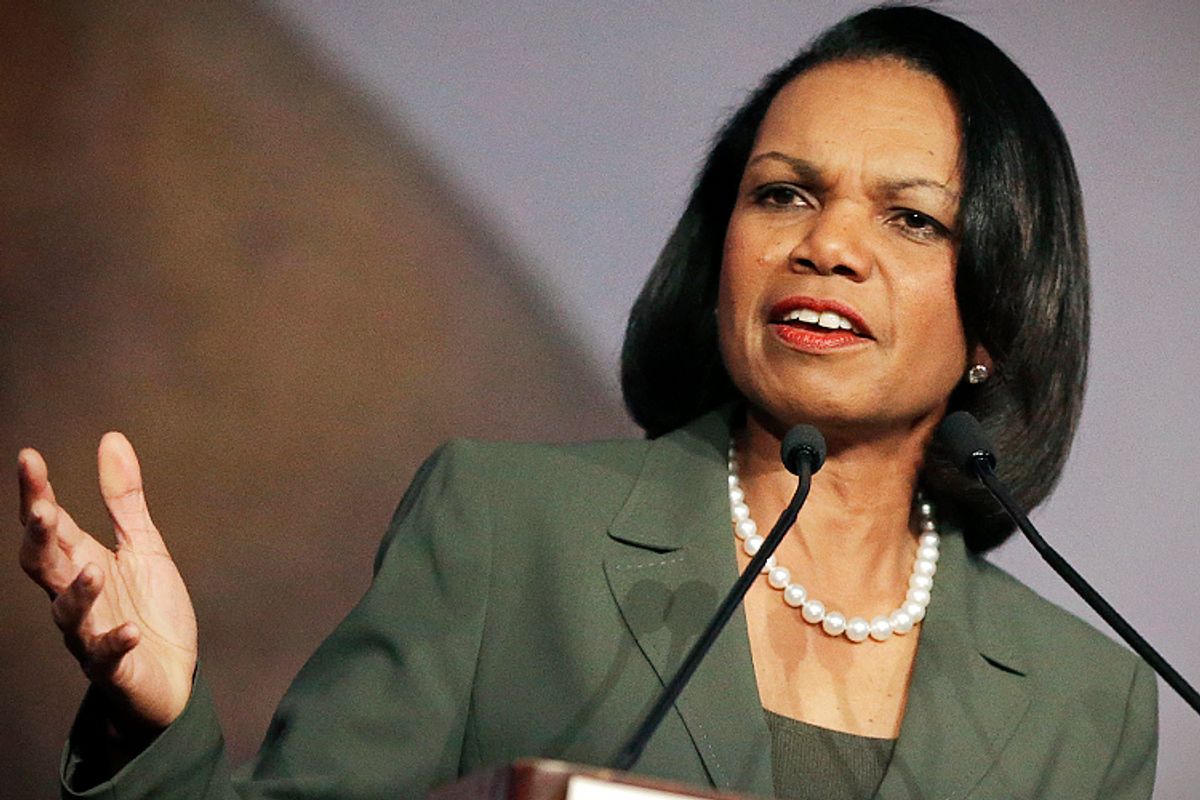 As sincerely as I wish everyone involved with the George W. Bush administration would just go away — or at least agree to only appear in the public eye in brief, tweet-size increments — I must admit that I think the recent kerfuffle over former Secretary of State Condoleezza Rice and Rutgers University has been valuable, if only for the way it's laid bare some of American society’s ugliest hypocrisies and quirks. I’m thinking of two in particular: the contradictory demands we make of our college students, and the intellectual ravages of our toxic cult of American exceptionalism.

For those who don’t know, here’s a quick recap of the incident: After a vocal student outcry at her selection, Rice decided she would not accept the university’s offer to speak at this year’s commencement, walking away from $35,000 and an honorary doctorate. “Commencement should be a time of joyous celebration for the graduates and their families,” Rice wrote in a Facebook note explaining her decision. Describing her invitation as “a distraction for the university community at this very special time,” Rice took the high road and swiftly put the controversy to rest by bowing out.

Because hers was just one of a recent handful of commencement reversals — the International Monetary Fund’s Christine Lagarde withdrew from a Smith College engagement, as did Robert Birgeneau from one at Haverford College — some pundits have since argued that Rice’s concession is proof that “liberal intolerance” is ascendant, threatening academic freedom and free speech all across our nation’s campuses. (To her credit, Rice disagreed, writing in her Facebook note that while she has “defended America's belief in free speech and the exchange of ideas” these values are “not what is at issue here.”) Other, smarter pundits have instead claimed that her story is an example of college kids being intellectual hothouse flowers, incapable of gracefully listening to opinions they don’t like without throwing a fit.

Olivia Nuzzi of the Daily Beast, for example, wrote with obvious frustration that the class of 2014 needs to “calm the hell down” and recognize that “oftentimes you find great wisdom in shitty people.” Before declaring that young people “are the worst” (which, considering Nuzzi’s own young age, was almost certainly written with tongue slightly in cheek) Nuzzi writes that the “entire point of college is to be exposed to different things,” a truism that 2014 graduates of Rutgers and Smith shamefully forgot. “[M]aybe some of those people will hail from organizations that negatively impacted poor countries, or maybe they were partly responsible for a war that ate up the country’s resources and resulted in human rights abuses and lots of needless death,” Nuzzi grants. But still.

At the Week, meanwhile, Damon Linker took Nuzzi’s attack one step further, arguing that not only did these students fail to understand the point of college but that they were perpetuating “the tyranny of right-thinking moralism” that is ruining America’s institutions of higher learning. Noting that he, too, opposed the war of choice that will forever be Rice’s chief legacy, Linker writes that “[t]he world is an imperfect and morally complicated place, filled with people who regularly do things I consider wrong, stupid, misguided, foolish, and unethical” but that such people should still not be “excommunicated, ignored, or banished from public life.” Besides, Linker writes, what good does protesting Rice serve “beyond convincing the protesters of their own moral superiority?”

Two thoughts. First (and less important) is that bashing college kids — especially ones who are defined by their idealism and hunger for change — remains one of our most widely accepted and least logically defensible pastimes. Despite telling ourselves that we in America value youth, education and self-expression, there are few cultural archetypes more universally loathed than the campus activist. We say we want our kids to be independent, informed, fearless and disruptive, but then we attack, patronize and demean them as soon as they decide they’d like to be more than seen and not heard. (This dynamic is especially unfortunate when played out among the press. As my friend Ned Resnikoff snarked on Twitter, “What made you guys all want to be journalists? For me it was the thrill and fulfillment that comes with mocking college activists.”)

Moreover, there's something particularly nonsensical about thwacking a bunch of students for supposedly ignoring the right to free speech when all they've done is exercise that right for themselves by peacefully organizing and expressing their disapproval.

The other (and more important) thing that comes to mind when surveying the backlash to the Rice backlash is the corrosive effect American exceptionalism can have on even the smartest and most skeptical among us. In both Nuzzi and Linker's pieces — as well as a similar one from GOP pollster Kristen Soltis Anderson — opposition to Rice is framed in partisan or ideological terms. Students don't like Rice, we're led to assume, because she's a Republican, full stop. But while I'm sure that's the case for at least some of the kids at Rutgers — who must be disappointed to hear that Rice's replacement will be Tom Kean, another GOPer — it's also a real misrepresentation of the fundamental problem with Rice and other top-tier members of the second Bush presidency. The implication is that the mistakes made by the last GOP president are more or less within the normal bounds of American politics, as if initiating an arguably illegal war and systematically flouting the Geneva Conventions is the same thing as cutting the estate tax or privatizing Social Security.

It shouldn't be necessary to say this, but: They're not. And it's only in a political world where the lives of non-Americans are unconsciously considered less valuable that such thinking could survive. To be clear, I'm not accusing Nuzzi or Linker of knowingly devaluing human life — Nuzzi describes the Iraq War in strongly negative terms, and Linker so hated Bush's decision to invade Iraq that he left the Republican Party. Instead, what I'm arguing is that our mainstream political debate is so saturated with unstated assumptions about our inherent goodness, our natural righteousness, and our basic decency that serious war crimes, when committed by American politicians, are sanitized as matters of differing opinion. (And in Rice's case, it's not as if we can pretend that she was somehow only tangentially related to the administration's worst crimes — here she is, back in 2009, defending torture with the Nixonian logic that nothing a president commands in service of national security can possibly be illegal.)

As if to make my point for me, the New York Times recently ran an Op-Ed from Timothy Egan in which Rice's failures and mistakes — which, remember, cost perhaps as many as 500,000 human lives while wrecking millions more — are dismissed with a chilling breeziness. "Near as I can tell, the forces of intolerance objected to her role in the Iraq war," Egan writes (apparently unaware that the magic of Google allows him to find the protesters explaining their objections in their own words). "The foreign policy that Rice guided for George W. Bush," Egan continues, "was clearly a debacle ... But if every speaker has to pass a test for benign mediocrity and politically correct sensitivity, commencement stages will be home to nothing but milquetoasts." Taking the already grotesque line that non-American life is less important than entertainment to an even more hideous extreme, Egan continues, "You want torture? Try listening to the Stanford speech of 2009, when Justice Anthony M. Kennedy gave an interminable address on the intricacies of international law, under a broiling sun, with almost no mention of the graduates."

So there you have it: Torture, when sanctioned by Americans, is basically a joking matter, an experience that's comparable to being bored while sitting in the sun. And it's the students at Rutgers who are the problem?