A neurotic writer aboard the USS George H.W. Bush

What happens when a fussy, self-conscious Brit spends two weeks on an aircraft carrier in the Persian Gulf 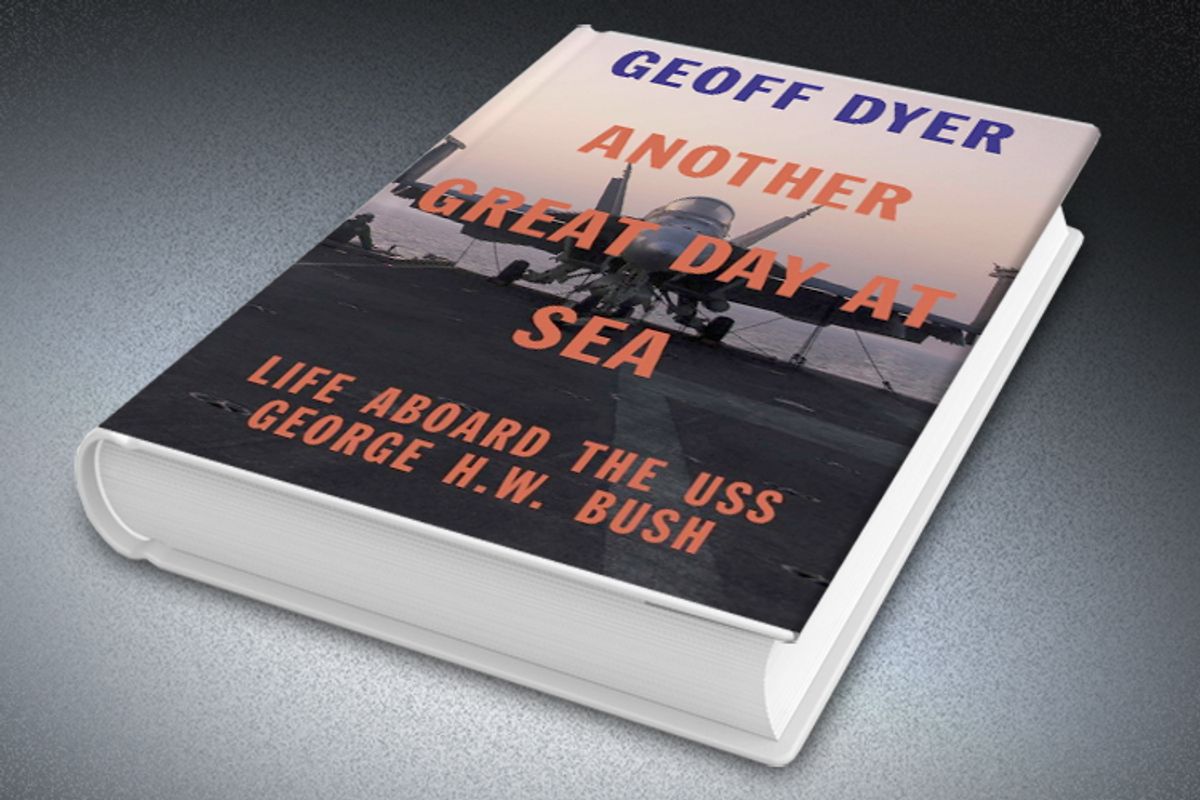 Not every writer is a grab-bag of neuroses, a being riddled with phobias, self-doubt, antisocial impulses and oddball obsessions -- but let's just say that personalities of that sort are overrepresented in the literary profession. Far less common is the writer who knows how to make this occupational disposition work for him. And foremost among those few is the British author Geoff Dyer. He's written a few idiosyncratic novels, a legendary book of jazz criticism ("But Beautiful") and several memorable collections of essays, but Dyer may be best known for "Out of Sheer Rage," a ridiculously smart, insightful and entertaining book about his inability to write a book about D.H. Lawrence. Any writer who's ever choked when attempting a major project will wince and nod all the way through it.

The notion of installing a writer of Dyer's baroquely sensitive and self-conscious temperament aboard an American aircraft carrier stationed in the Persian Gulf is obviously a stroke of genius. In fact, Dyer's two-week writer-in-residency stint on the USS George H.W. Bush was his own idea, arranged by an organization that places "some of the best writers and Magnum photographers in some of the key institutions of the modern world." A tall, skinny, awkward and bookish fellow -- or, as he puts it, "a feeble streak of unshouldered manhood" -- Dyer might seem an unlikely aircraft-carrier buff, but like many men, he "loved planes, military planes especially" as a boy, and spent a good bit of his youth putting together and painting models of them. As he saw it, "all of the devastating power and glamor of military aviation was concentrated on a carrier."

To be honest, when I picked up "Another Great Day at Sea," Dyer's book-length account of his time on the USS Bush, I was hoping for something like David Foster Wallace's "A Supposedly Fun Thing I'll Never Do Again," a simultaneously hilarious and searching essay, originally written for Harper's magazine, about Wallace's sojourn on a cruise ship. "Another Great Day at Sea" is not like that; Dyer was awestruck by the carrier and the planes, and he found himself liking and admiring most of the crew, even when he had reservations about their political and religious beliefs. He doesn't really question the enterprise in which they are engaged (beyond noting that, in stationing the carrier, America is spending a whole lot of fossil fuel to secure its supply of fossil fuel). The matter of what the fighter pilots do after they take off from the flight deck every day is left puzzlingly unexplored. Perhaps, as seems likely given how Dyer portrays himself, he was hesitant to seem rude or ungrateful.

But if "Another Great Day at Sea" falls short of being a trenchant book, it's nevertheless a thoroughly enjoyable one. The pleasure it delivers comes from two sources: Dyer's potent descriptive talent as he evokes the sequestered and sometimes surreal environment and society of the carrier, and the comedy he derives from his own fish-out-of-water status and high-strung personality. Having freaked out upon learning that he would be expected to share quarters with the photographer (whom he insists on referring to only as "the snapper") and four officers, Dyer pitched a fit of such magnitude that he was awarded a solo berth in a "guest suite." "I had taken on the might of the US Navy and won," he marvels to himself, before realizing that the suite is located directly below the flight deck.

"The noise here," Dyer writes, "made a leaf-blower sound like leaves in a breeze, the kind of ambient CD played during a crystal healing or reiki session ... It was like a jet taking off overhead -- or in one's head. It was a noise beyond metaphor. Anything other than what it actually was diminished what it was." He was told, by his ever-chipper Navy guide, that he'd get used to the din, but Dyer had his doubts. "The essence of my character is an inability to get used to things. This, in fact, is the one thing I have grown accustomed to: an inability to get used to things." Another problem was "the scran, the scoff, the grub," given that Dyer is a finicky eater and easily overwhelmed with revulsion by the smell of "cooked meats." (No surprise: There's a whole lot of low-quality meat cooked on an aircraft carrier.) He nearly starved until the captain's personal chef took pity and began slipping him leftovers from her kitchen.

"Another Great Day at Sea" conveys the titanic roaring of the planes, the pervasive stink of jet fuel, the language-beggaring scale and "pure and undisturbed horizontality" of the flight deck, while picking out vivid details, like the deck's crew, who strike Dyer as "medieval," "guys in grease-smeared brown sweatshirts ... draped in heavy brown chains," who "looked like they were ready to face the burning oil poured on them from the walls of an impregnable castle." The planes are launched by titanic catapults and land by hooking themselves on what's essentially a lasso, amazing and terrifying devices that Dyer renders superbly.

As for the culture aboard the USS Bush, Dyer likes it, but then he likes Americans, something that's fairly rare in European intellectuals. This is why he chose an American rather than a British ship (well, that and the fact that Britain doesn't have an aircraft carrier). He knew it would be "like staying in a small town in America (albeit one organized along unusually clear hierarchical lines), surrounded by American voices, American friendliness, American politeness, American Americans. That, I knew, would be a source of pleasure and happiness."

So he doesn't mind when his escort reveals that when he bows his head for a few moments before every meal, "I'm praying for your atheist's soul," and he regards the inspirational mottoes posted all over the ship and incessantly mouthed by his sources ("STOP looking at where you've been and START looking at where you can be!" "Bridge the Gap between Good and Great") with a fond tolerance. The title of the book quotes a regular part of the captain's daily announcement over the PA, and was not chosen with ironic intent, or not entirely so. Dyer likes what he see as a very American "ability to dwell constantly in the realm of the improvable superlative."

Even when he encounters some of the more demented specimens of our citizenship -- such as a Texas hamburger kingpin, a blowhard who appears one day with a shipment of steaks for the troops and who goes around talking about "media puke" and threatening to rip people's lips off -- Dyer is amused rather than appalled. In an interview that might have been lifted from the pages of "Alice's Adventures in Wonderland," he sits down with a drug counsellor who tells him, to his astonishment, that nowadays people are inhaling sewage to "git the high." This is a big problem in the Navy, except that it actually isn't, just as the service is rife with abusers of bath salts and something she calls "the spice," although there wasn't too much of that going on. "She had a highly developed kind of negative capability," Dyer decides, "was able to bear two completely contradictory ideas in that head of hers without any sense of their canceling each other out." He walks out of her office feeling a bit high himself.

While staying on the USS Bush, Dyer underwent a crisis in confidence regarding his own work, brought on by immersing himself in pieces by Joan Didion and Tom Wolfe. He's struck by the realization that -- with his inability to remember names, ranks and technical information -- he's not exactly a crackerjack reporter. "I feel I have to say at the outset that facts are not my strong point," he tells a wary source. "To be perfectly honest, strong points are not my strong point. But I'll do my best." It's possible to sympathize with his insecurity while quarreling with its pervasiveness. Who cares about names and ranks, when someone's giving you the sights, smells and sounds of this strange floating village, a place where sex and alcohol are forbidden and everything ends up coated with a thin film of grease? Dyer's best is much more than good enough.