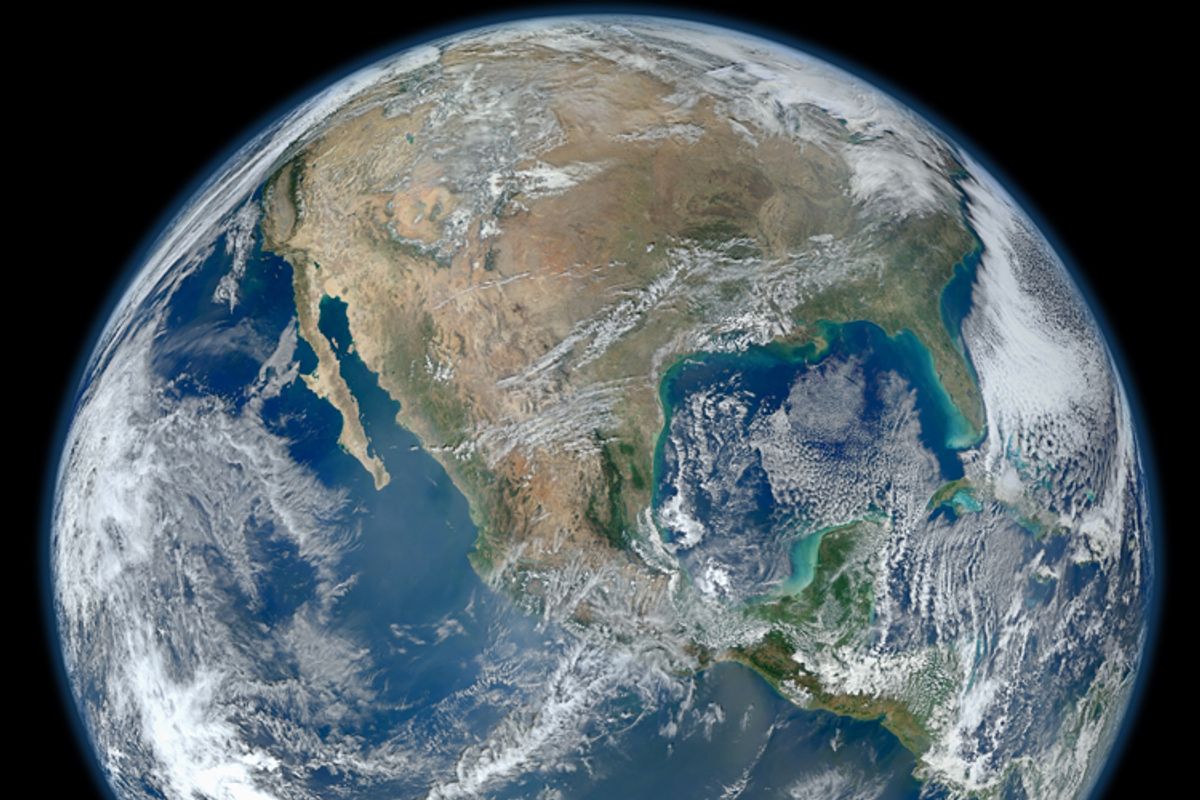 Excerpted from "Expulsions: Brutality and Complexity in the Global Economy"

There was a time when the environmental damage we produced remained somewhat localized, confined to specific places. That time is gone. Today, nonindustrial areas, such as Greenland and the Antarctic, experience the industrial pollution generated in the United States and in Russia, to mention just two countries. Damage produced in particular sites now scales up, driven by the vastness of destruction, and becomes a planetary problem that drifts back down to hit even those places that did not contribute to the damage.

Greenhouse gases (including carbon dioxide, methane, nitrous oxide, and particulate matter such as black carbon) are key causes of climate change. Diverse measures arrive at an estimate that human activity has generated 350 billion tonnes of carbon since 1959; 55 percent of this has been taken up by the oceans and land, and the rest has been left in the atmosphere. In 2009 alone, global carbon dioxide emissions totaled 30 billion tonnes. By 2011, annual emissions had increased by 5.3 percent to 31.6 billion tonnes. And by early 2013, the level of carbon dioxide in the atmosphere surpassed the critical level of 400 parts per million. This is a level not seen on earth since the Pliocene era 3 million years ago.

Under current conditions, global CO2 emissions (including emissions related to deforestation) will reach 41 billion tonnes per year in 2020. The EPA estimates that industrial emissions account for 50 percent of greenhouse gases emitted in the United States, and industry is almost certainly responsible for an even higher proportion of China’s huge and growing emissions. At this scale, and with the relationship of carbon dioxide to climate change, industrial pollution is a driver of massive global problems.

One major effect is rising land temperature. The numbers for the current warming phase are extreme compared to the available historical records. May 2012 was “the 327th consecutive month in which the temperature of the entire globe exceeded the 20th-century average,” writes Bill McKibben. The spring of 2012 was the hottest ever, and marked the biggest difference with the average seasonal temperature recorded for any season. In the United States, the month of June 2012 broke 3,215 heat records across the country, and May 2012 was the warmest May in the country’s recorded history. There are debates and disagreements about the precise rate, timing, and level of increase. But very diverse types of studies all document this upward trend.

Climate change has already started to affect global agricultural output. The Club of Rome predicts that climate change will cause an increase of 2°C in average temperature by the year 2052 and a 2.8°C rise in average temperature by 2080. An increase of that magnitude is predicted to “reduce yields across two-thirds of the maize-growing region of Africa, even in the absence of drought”; crop losses for maize could reach 20 percent by midcentury.

Not all droughts (or floods) can be attributed to this type of climate change, as I indicated earlier in this chapter. For instance, what is referred to as the “Dust Bowl” in the United States—a dry plain extending from the central United States into Canada, with Oklahoma and Texas as its center—predates anthropogenic climate change. Seager et al. write that one difference today is that the impact of greenhouse gases on the climate has caused the Chihuahuan Desert to expand, or, in Mingfang’s words “We’re essentially moving the desert further north.” There is research on climate change suggesting that by the year 2020, the American Southwest will face permanent drought.

In Asia, the Aral Sea is one instance of a shockingly dried-out lake. Like the Dust Bowl in the United States, climate change is not the sole cause of the drying. But the scale and velocity of water loss may be partly due to the global scale-up of climate change and its blowback to sites only indirectly implicated. Not unlike the United States at the time, Soviet-era irrigation projects are known to have been wildly inefficient. One example is that of the world’s largest irrigation canal, the Qaraqum Canal, which diverted 13 cubic kilometers of water from the Aral Sea for years; as much as 50 percent of this water was lost en route due to poor engineering. On top of these inefficiencies, climate-change-induced drought and desertification sharply increased the stress on the Aral Sea. The end result is that what was once the world’s fourth-largest body of fresh water has been reduced to less than 10 percent of its original volume.

The other major planetary transformation arising from direct and indirect effects of greenhouse gases is the rise of ocean levels and their acidity. Between 443 billion and 629 billion tons of meltwater are added to the world’s oceans each year, which raises sea level by about 1.5 millimeters a year. This is in addition to the 2-millimeter yearly rise caused by expansion of the warming ocean. It’s true, of course, that not all ice-bound areas are melting. Some glaciers are seeing as much ice added to higher-elevation points as melts away from the base; this may occur because thaw at the periphery evaporates into the air and then recondenses and freezes at the colder, less humid peaks. Further, for a variety of meteorological reasons, parts of the Antarctic, as well as particular glaciers elsewhere, are not losing ice due to melting; this is partly explained by the fact that ice forms more easily over land than over the ocean. However, the extent of ice melt is indeed alarming.

Every now and then the major effects of environmental destruction become visible to a larger public. In 2012, 57 percent of Greenland’s ice sheet melted between July 8 and July 12. This reduced ice coverage to 3 percent of its maximum, stunning scientists, terrifying climate watchers, and mobilizing the media into reporting it.

The melting of ice at this scale becomes a major factor in raising sea levels. The interaction between water temperature and ice melt arises from the fact that ice reflects more solar energy than water: this insulates the ocean beneath the ice from the sun. When the ice melts, that insulation thins or disappears, and the ocean water warms, which in turn melts more ice, and so on in a chain of warming water, melting ice, and rising ocean levels. At present, the losses of ice are shared roughly equally between Greenland and Antarctica. If the present acceleration continues, ice sheet melting alone could contribute up to 56 centimeters to sea level rise by 2100.

A distinct type of melt is the thawing of permafrost in the Arctic Circle. This too is caused by anthropogenic climate change. In 2008, the permafrost under the town of Newtok, Alaska, began to thaw and the buildings started to sink. The Bering Sea ate away at what had become a permeable coastline. The 320-person community of Yup’ik Inuit, whose forebears had lived in the same location for two thousand years, was forced to leave. Of Alaska’s 213 Alaska Native villages, 184 have been seriously affected by erosion and flooding; six of them have been deemed to be in need of immediate help.

Permafrost thaw creates a feedback loop that accelerates the type of climate change we are observing. As permafrost thaws, the trapped organic matter begins to decay and to release methane and carbon dioxide. Permafrost thaw is especially dangerous because it is likely to produce methane (CH4), which has a much stronger warming effect than carbon dioxide. Scientists generally agree that between 9 percent and 15 percent of the top three levels of permafrost will melt by 2040; this is expected to increase to between 47 percent and 61 percent by 2100. The estimated carbon release from permafrost degradation is 30 billion to 63 billion tons of carbon by 2040, 232 billion to 380 billion tons by 2100, and 549 billion to 865 billion tons by 2300.

Current efforts by many governments to stem this kind of climate change are not going to be enough. Even if we implement existing agreed-upon standards, we would still not secure the planet’s sustainability. Consider two future patterns: one under current conditions and the second if we implemented all current agreements to reduce environmental damage. It would make a difference, but one far too small to alter the basic trajectory. Existing agreements to address environmental destruction operate at a level and through formats that fail to address the deeper dynamics causing the climate change. These dynamics cut across the existing boundaries and divisions of the interstate system.

Excerpted from "Expulsions: Brutality and Complexity in the Global Economy" by Saskia Sassen. Copyright © 2014 by the President and Fellows of Harvard College. Used by permission. All rights reserved.