Lean out: The underhanded feminism of "The Good Wife"

On this season of "The Good Wife," women don't need to rely on each other to succeed 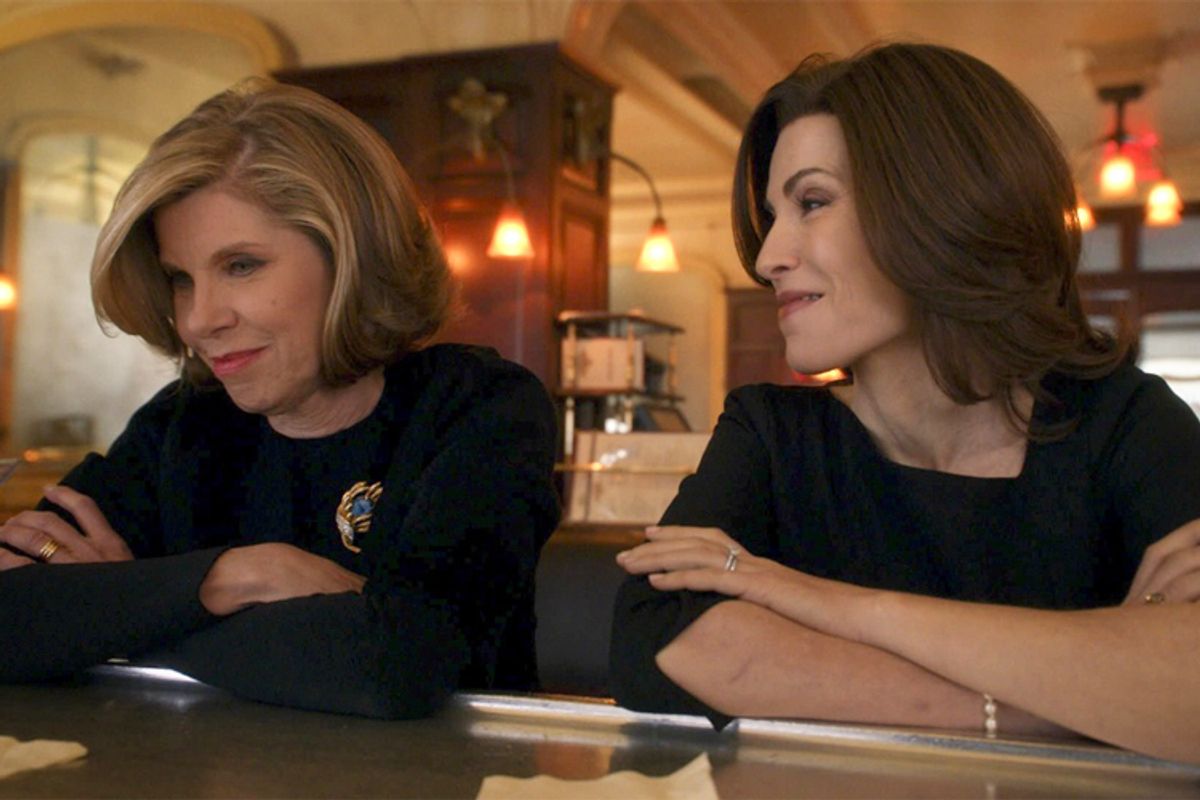 Christine Baranski and Julianna Margulies in "The Good Wife" (CBS)
--

Last Sunday, the penultimate episode of “The Good Wife” began with an old-money, corporate-manipulating silver fox getting a pie to the face as Alicia Florrick stood by and escaped with merely a stain. The incident is not exactly a metaphor for the way this show is heading. For one, “The Good Wife” doesn’t hate its male figures – not quite. Secondly, its female characters never stand idly by while anything important is happening. But the scene does represent a persistent tone in the series that the tide is turning against the accepted notion of male privilege and dominance. In no single character is that change more evident than Christine Baranski’s Diane Lockhart.

The moment her dashing, more cutthroat male co-conspirator Will Gardner was killed off, Lockhart stepped into the crosshairs of the other partners at the firm she helped build. Her character is instantly sympathetic because she is not innately a schemer as are the men who have targeted her. But neither does she come across as self-righteous. And, most importantly, she is not easily cowed. Watching her begrudgingly become embroiled in a game of office politics with a handful of adversaries hiding in plain sight has been the most bittersweet joy of the season. To be honest, their claws extruded so rapidly that I can’t even remember why Louis Canning (Michael J. Fox) and the slithering David Lee (Zach Grenier) are so out to get her. One of the excuses they have used is that she has softened since Will's death -- a complaint with distinctly sexist undertones. They don't claim to want to displace her because she is a woman, but because they perceive her as being weak – which, in this environment, can easily be the same thing.

One of Diane’s repeated tactics in defending her seat as the managing partner of Lockhart/Gardner has been to seek allies to shore up her position. In keeping with the show’s particular bent, the strongest of these allies have all been women. What’s even more interesting than Diane soliciting these other powerful women is that all of these potential alliances have failed in one way or another because these women all possess their own agendas – agendas that eventually win out over Diane’s needs. A handshake deal between Alicia and Diane to unite their two firms dies pretty much at Alicia’s hands. The mythical “rainmaker” Rayna Hecht (Jill Hennessy) withdraws from a high-profile co-counsel arrangement with Diane because she fears Diane’s declining status will weaken her own. Even wily Kalinda, when asked by Diane to spy on Canning, returns the favor for Canning, thereby making herself all the more indispensable to both.

It is a sign of the show’s smart conception that the “The Good Wife’s” brand of feminism does not necessarily trumpet female solidarity. In fact, one of the final scenes of last week’s episode made it abundantly clear that Diane Lockhart is very much on her own. It is a meaningful and sad moment when Alicia’s partner Cary Agos (the always cool Matt Czuchry) not only cautions Alicia against lending a hand to Diane but also reminds Diane that, not too long ago, she was the one keeping others down. Baranski plays these moments with a gorgeous solemnity. She is simultaneously poised and bent under the weight of a world she created but may be tired of maintaining. (Recall the moments in previous episodes and seasons when she tried to escape the firm, either for a judgeship or for a quiet domestic life.)

The character of Diane Lockhart is certainly not without guilt and/or skeletons. But she is no more tarnished than the colleagues who are planning her downfall. If anything, her desire to avoid this specific conflict demonstrates a maturation and mildness that -- though her more aggressive counterparts may consider theses flaws -- seem like qualities befitting a true leader. For that reason, it was all the more thrilling to hear her declare, subtly but firmly, that she would not stand still as a couple of entitled men hurled underhanded schemes her way. The stage for the season finale is set: She will fight, alone if need be.

(The season finale of "The Good Wife" airs Sunday night.)