He's arm-wrestled Hulk Hogan, danced to Bob Marley, smoked crack and cursed in front of kids -- all in a day's work 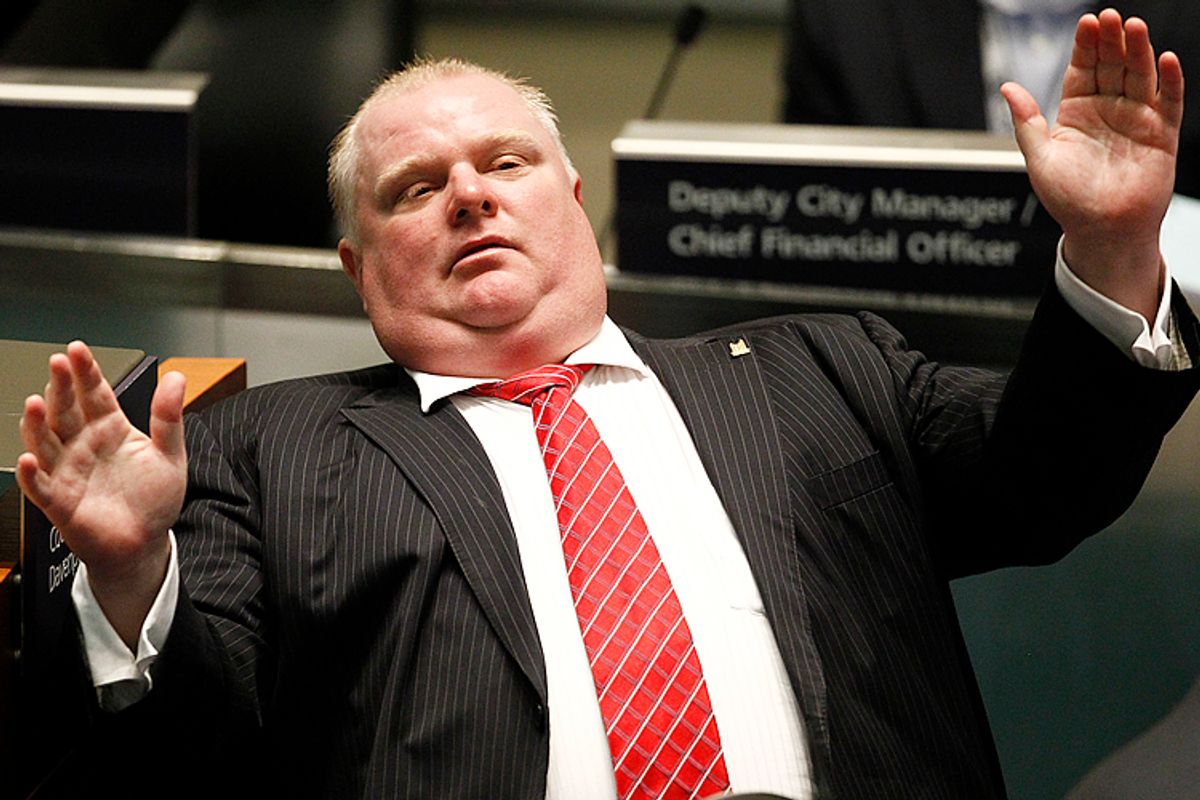 With noted human cartoon and Toronto Mayor Rob Ford in rehab, supporters of hilarious chaos are in an official state of mourning.

According to Ford's statement, "I have a problem with alcohol and the choices I have made while under the influence.”

Just in time to emphasize these problems, the Toronto Star has published “One Wild Night in March,” a description of Rob Ford’s attempt to break the record for utterly insane behavior by a public official by recreating all of his greatest hits in one evening.

- punched a friend in the face (with a bag of burgers)
- invited people to punch him
- went on a racist tirade against Jews, blacks and Italians
- consumed drugs (presumably “multiple” and “lots”)
- drove while intoxicated
- spoke Jamaican patois
- insulted his own mother
- invited a guest to have sex with his wife.

We hope Rob Ford gets the help he really, really super-desperately needs, and it sounds like maybe that's happening. He told the Toronto Sun: “Rehab is amazing. It reminds me of football camp. Kind of like the Washington Redskins camp I went to as a kid.” He continued: “Of course, I am coming back and I am going to kick butt.”

In the meantime, the internet as a whole will miss Rob Ford’s beet-faced brand of nonsense. To tide you over, we’ve compiled a short list of highlights (so far):

In May 2013, a video surfaced of Ford smoking crack, apparently taken by his own drug dealer. The Toronto Star describes the video, which is in police possession: “Ford is incoherent, trading jibes with an off-camera speaker who goads the clearly impaired mayor by raising topics including Liberal leader Justin Trudeau and the Don Bosco high school football team Ford coaches. 'I’m f---ing right-wing,' Ford appears to mutter at one point. 'Everyone expects me to be right-wing. I’m just supposed to be this great.…' and his voice trails off. At another point he is heard calling Trudeau a 'fag.' Later in the 90-second video he is asked about the football team and he appears to say (though he is mumbling), 'they are just f---ing minorities.'”

Admitting to using crack, “probably in one of my drunken stupors.”

After months of stonewalling reporters about the video, Ford acknowledged smoking crack but denied being some kind of crack addict. “Have I tried it? Probably in one of my drunken stupors, probably approximately about a year ago,” Ford admitted in November. “I’ve made mistakes … all I can do is apologize and move on.” He then confirmed that he would continue as mayor and run for re-election, on the theory that crack and public office are compatible.

Another video went viral in November, this time of an inebriated Rob Ford threatening to murder an unnamed party. Possibly you? A partial transcript, courtesy of the Toronto Star: “'Cause I'm going to kill that f--king guy. I'm telling you it's first-degree murder. No holds barred, brother. He dies or I die, brother. ... When he's down, I'll rip his f--king throat out. I'll poke his eyes out. I will, f--k, when he's dead, I'll make sure that motherf--ker's dead. ... I am a sick motherf--ker, dude.” Ford proceeds to offer several estimates of how long it might take to commit the murder, ranging from five to fifteen minutes.

Shrugging off allegations of sexual harassment: "I've got more than enough to eat at home."

By the end of 2013, police had compiled nearly 100 allegations against Rob Ford, including complaints he had sexually harassed a female staffer. Brian Phillips writes for Grantland, “Ford shocked much of Canada by denying — on live television — that 'I wanted to eat her pussy.' 'I’m happily married,' the mayor continued, turning the classiness dial up to 9 million, 'I’ve got more than enough to eat at home.'" Ford also made this statement at work while wearing a Toronto Argonauts jersey.

Trampling a city councillor while charging at a heckler.

During a heated city council meeting in November (subject: Rob Ford’s conduct), Ford knocked over councillor Pam McConnell. Why? He was rushing to the side of his brother, councillor Doug Ford, who was engaged in a screaming match with members of the public gallery. McConnell, a tiny, fragile human to Ford's Kool-Aid Man, suffered a swollen lip and experienced shoulder and neck pain for weeks. “But, in general, I’m lucky to be alive,” she toldthe Toronto Sun.

Even though Rob Ford has done a ton of drinking and driving, he’s not above mocking others for the same. On Nov. 18, 2013, the mayor went through a playful pantomime after councillor Paul Ainslie — whose license was suspended for three days in May — interrupted the mayor's brother, Doug Ford. The takeaway? Never disrespect Doug Ford near Rob Ford, and vice versa. (Oh, and NEVER DRINK AND DRIVE.)

It’s not all crack smoking, death threats, and drunken stupors! Here is Ford dancing in December during a music event at City Council. Note that his moves are a little more wooden than his drunk driving pantomime.

Swearing in front of the children.

In an interview with CNN, Rob Ford made it clear he was tired of the negative press coverage: crack-smoking this and crack-smoking that. He said: “I’ve had enough. I’m sick and tired of all these allegations and all this bullshit — excuse my words — and that’s all it is. Sorry, I guess I shouldn’t have sworn in front of the kids. You know what, I’ve made mistakes. I drank too much. I smoked some crack some time. What can I say? I made a mistake, I’m human.” At this point I think we can safely say that dropping the S-bomb is the least damaging thing Rob Ford could have done in a room full of children.

Declaring himself the best mayor EVER, despite everything.

Is Rob Ford the best mayor ever? Yes, according to Rob Ford: “I’ve got the strongest track record. I’ve been the best mayor that this city’s ever had.” He then urged everyone not to get distracted by his perpetual crack-smoking scandals: “You want to get personal, I’m sticking to my record.” Rob Ford’s re-election slogan? “Ford More Years.” In 2010, his slogans were “Respect for Taxpayers” and “Stop the Gravy Train.”

On April 30, Ford officially took a leave of absence from his duties as mayor and checked into rehab the next day. What prompted this? A new video of the mayor smoking crack in his sister’s basement the previous weekend. The clip, taken by one of Ford’s friends/drug associates, is being shopped around for 6 figures, but the Globe and Mail was able to obtain video stills for $10,000.

Ranting about divorce, plus kicking people in the head.