How Louis C.K. became the Oprah of comedy

He's still hilarious, but his shtick has increasingly taken a turn into sentimental morality play 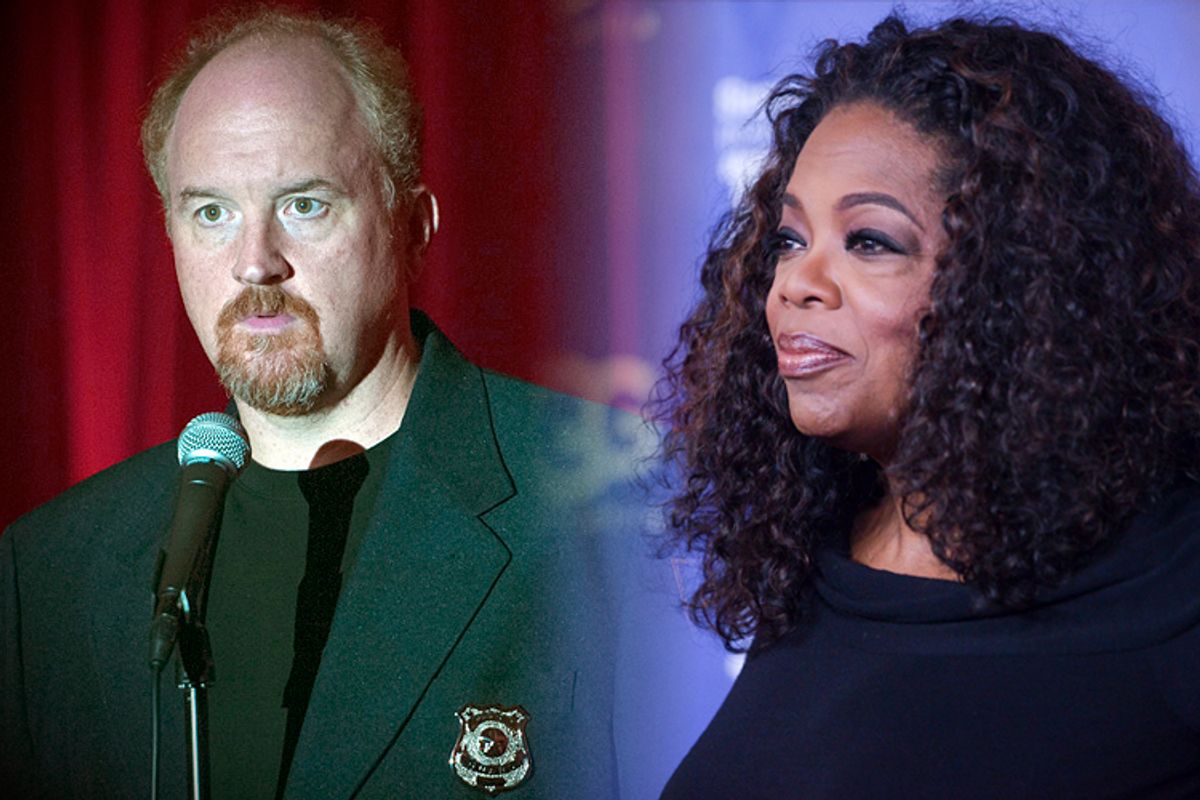 “Damn it! That is so goddamn disappointing, Louie.” This is what “the fat girl” (Sarah Baker) says to Louis C.K. in the third episode of his FX series – in response to his assertion that she’s not fat – before embarking on a painfully long diatribe about single fat women having it worse than single fat men. Baker’s character patronizingly schools Louie – or C.K., having written the monologue, schools us – in our culture’s standards of beauty in a scene that is loaded with pregnant pauses and bromides. “All I want is to hold hands with a nice guy,” she says. So he takes her hand, and the fat lady sings. OK, she doesn’t sing, she laughs.

This scene exemplifies the sort of sentimental morality play that has — unexpectedly — become one of the hallmarks of C.K.’s work. The 46-year-old comedian has been largely commended for telling it like it is over the past four seasons of “Louie,” even as his tone has crept into preachiness. The “fat girl” episode was a rare case in which he was criticized, as some feminists found his take on female body issues somewhat presumptuous and sanctimonious. But what seems more surprising is that, despite using his show as his own personal soap box, C.K. has never been called out for self-righteousness before. It’s as though his sincerity shields him from judgment.

Last year on “Conan,” for instance, C.K. went viral after explaining how cellphones are stupid and prevent this generation from experiencing life in its totality. He shared an anecdote in which his cell would have protected him from a particularly emotional moment. “I started getting that sad feeling and I was reaching for the phone and then I said, ‘You know what? Don’t. Just be sad. Just stand in the way of it and let it hit you like a truck,’” C.K. said, adding, “And I pulled over and I just cried like a bitch. I cried so much and it was beautiful.” Roll your eyes at that and you are likely to bear the brunt of fans like Eric Spitznagel, who wrote in Vanity Fair in 2009, “If you don’t find yourself nodding along with C.K. in fierce agreement, and even occasionally pumping the air with a raised fist salute, you’re either dead inside or a member of that ‘crappiest generation’ C.K. was talking about.”

C.K.’s use of “humor as a moral compass” has afforded him an army of yes men, Andrew Romano argued in the Daily Beast in May. “It’s this moral perceptiveness — and in a certain sense, prescriptiveness — that have made C.K. such a ‘duh’ proposition,” he wrote, adding, “his best jokes — the ones in which you recognize your own absurdity or confusion; the ones you remember whenever your own life gets absurd or confusing — have the power to make you a little bit more human, and a little bit less of whatever else it is we’re becoming.”

One of C.K.’s best-known jokes is his “Everything’s amazing and nobody’s happy” bit from “Late Night With Conan O’Brien” in 2008, which even struck a chord with religious personalities. “We live in an amazing, amazing world and it’s wasted on the crappiest generation of spoiled idiots,” he said, continuing, “This is what people are like now, they’ve got their phone, they’re like, ‘Eugh, it won’t ...’ Give it a second! It’s going to space! Can you give it a second to get back from space?” The anecdote has a clear message, but it’s not overly serious or dogmatic. Obviously: It’s comedy.

But two years later, in a CBS spot for Father’s Day, C.K. dropped the humor entirely. “I felt like being a dad was taking away everything I wanted to be, and I was right, but so what? What’s so great about our lives? What are adults without kids? What’s the point?” he said. “Get into it. It won’t take away your manhood, it’ll give it to you.” It’s this kind of pontification that occasionally turns C.K. from a comedian into a kind of self-help guru, peddling pat life advice vaguely dressed up as jokes — a male comic’s version of Oprah.

“I’m fucking around with a lot of big ideas, and I don’t have the authority to seriously talk about them,” is how C.K. put it in Rolling Stone in 2011. It’s a style that goes back to George Carlin, whose social commentary fell under what he called his “big world” rubric. C.K., who dedicated his stand-up special “Chewed Up” to Carlin after he died in 2008, was one of the late comic’s biggest fans. “This idea that you throw everything away and you start over again,” C.K. said during a 2010 tribute to Carlin at the New York Public Library, adding, “When you’re done telling jokes about airplanes and dogs, you throw those away, what do you got left? You can only dig deeper, start talking about your, you know, feelings and who you are and then you do those jokes and they’re gone, then you’ve got to dig deeper so then you start thinking about your fears and your nightmares and then you start doing jokes about that.”

It was after he became a father in 2002 that C.K.’s material took its first moral right turn. “Having kids, you don’t escape from it. It’s a big, stressful, exhilarating, real-life thing. And it’s permanent. You have to grow up,” he told Rolling Stone, admitting that he tries to avoid becoming a “moralizing gasbag” by sprinkling jokes through his lectures. To C.K., as to Oprah, growing up means being a good person. “I would like to be a better person,” he reportedly said during his 2011 stand-up show “Louis C.K. Live at the Beacon Theater.” At another point he announced, “You should act in a way that if everyone acted that way, it would be all right.”

In a sense, C.K. is rebranding Oprah for a new generation, the same way Judd Apatow was responsible for “rebranding social conservatism for a younger generation,” according to New York Times columnist Ross Douthat.  “By marrying raunch and moralism, Apatow’s movies have done the near impossible,” Douthat wrote. “They’ve made an effectively conservative message about relationships and reproduction seem relatable, funny, down-to-earth and even sexy.” C.K. does the same thing for Oprah-style morality ("the key to life is to develop an internal moral, emotional G.P.S. that can tell you which way to go," she said in her Harvard Commencement Speech last year) with a comic voice that oscillates between the surreal, the absurd, the hilarious and the sincerely sentimental. “I have a list of beliefs,” he once said, “and I live by none of them.” But that doesn’t mean, he seems to be saying, that you shouldn’t.