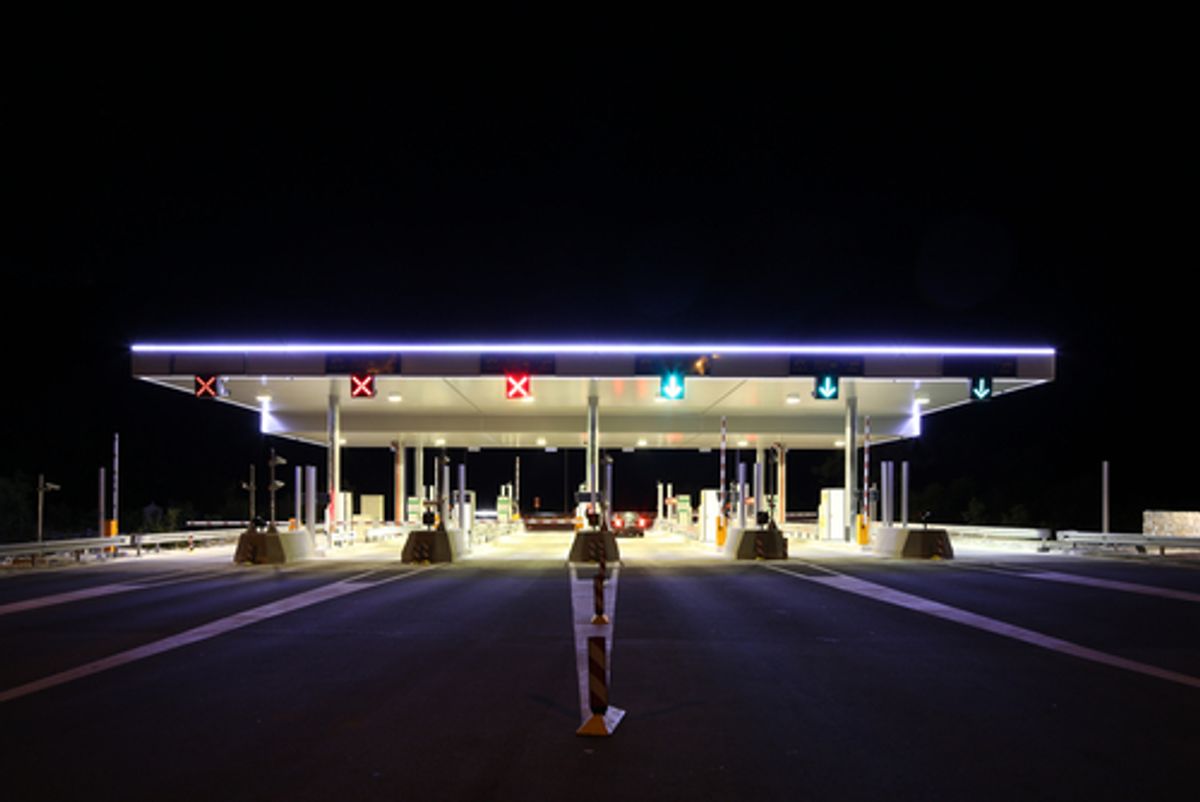 For decades we’ve been subjected to constant propaganda that government is inefficient, bureaucratic and expensive. We’re told that the answer is to “privatize,” or “outsource” government functions to private businesses and they will do things more efficiently and everyone comes out ahead. As a result we have experienced decades of privatization of government functions.

So how has this wave of privatization worked out? Has privatization saved taxpayers money and improved services to citizens? Simple answer: of course not. If a company can make a profit doing something the government had been doing, it means that we're losing out one way or another. It’s simple math. And the result of falling for the privatization scam is that taxpayers have been fleeced, services to citizens have been cut way back and communities have been made poorer. But the companies that convinced governments to hand over public functions have gotten rich off of the deal. How is this a surprise?

The mother of all privatization horror stories is what happened with Chicago’s parking meters. In 2008 the city “financialized” its parking meter revenue stream. It leased the rights to collect from parking meters to a consortium led by Wall Street bank Morgan Stanley. The lease is for 75 years.

Right away parking-meter rates went up fourfold and meters stopped working. The city’s residents were unhappy, but there was nothing they could do about it.

But wait, it gets worse. Unsurprisingly, it turns out that the big Wall Street bank was more interested in making money than in giving Chicago the best deal it could. An inspector general looked into the deal and found that the city was shortchanged by at least $974 million. But a 2010 Forbes story says the Morgan Stanley consortium may realize a profit of $9.58 billion after paying Chicago only $1.15 billion.

To top it off, the city not only gave up 75 years of revenue for not nearly enough up-front cash, it had signed a contract prohibiting the city from interfering with Morgan Stanley’s ability to profit from the deal. This means the city can’t build parking structures where they are needed and can’t even give out disabled parking permits. The city can’t even close streets to have street fairs or festivals without paying Morgan Stanley for lost meter profits.

Some states are considering privatizing their roads with “public-private partnerships.” The deal is that private companies maintain the roads and in exchange can charge a toll and make a profit. How is this working out?

In 2006 Indiana privatized I-80, the Indiana Toll Road. For $3.8 billion the state gave a 75-year lease to the Australian company Macquarie Group and Spain’s Cintra. (Goldman Sachs is said to have earned $20 million for brokering the deal.) At the time Washington Post business columnist Jerry Knight wrote that the deal sounded like “tossing the family furniture in the fireplace to keep the house warm.”

Since then tolls have just about doubled. And it’s going to get worse. Dave Jamieson at the Huffington Post explained, “The road's leaseholders can now raise the toll annually at one of three rates -- at a flat two percent, at the percentage increase in the consumer price index or at the percentage increase in gross domestic product -- whichever is highest. Over the course of the coming decades, Hoosiers can expect to learn a hard lesson in compound interest, long after Gov. Daniels is gone.”

In 2007 Colorado leased its Northwest Highway to a Portuguese/Brazilian company for 99 years. The company raised tolls 50% and taxpayers have to pay the company if too many carpoolers use the high-occupancy lanes. The contract includes a “non-compete” clause that "requires payments to the foreign corporation if certain roads or facilities are built in the area that would compete with the toll road." In other words, if traffic gets really bad Colorado is not allowed to do anything to solve the problem for its citizens – mass transit, congestion-relief arteries, etc. -- instead forcing citizens to use that highway and pay whatever the toll is. For 99 years.

Imagine a system where someone makes a profit if more and more people are put in prison. This is known as a “perverse incentive.” Really, can you think of anything worse than getting a profit to get people put in jail? What you think could go wrong is exactly what does go wrong. These companies want profits, so rehabilitation becomes a “cost.”

These companies push for government policies that put more people into prison for more crimes and for longer sentences. Prison-for-profit companies working with the corporate/right-wing lobbying outfit American Legislative Exchange Council (ALEC) came up with model legislationpushing things like “three strikes” and “truth in sentencing” which greatly increase the number of prisoners and the amount of time they serve.

But the worst part of prison privatization is companies saving on “costs” by cutting back on staff, food quality and you-name it. A 2013 Palm Beach Post investigation found that “dangerously low numbers of corrections officers — including local guards with criminal backgrounds — and reports of squalor, rape and riots dog corporate prison operators. ...Audits, security reports, lawsuits, government records and state and federal investigations in 21 states unveil a startling pattern of murder, riots and sexual assault at private prisons nationwide. Often, those failures stem from not enough guards.”

Nine major riots erupted since 2000. At least 25 inmates died amid claims of mistreatment, inadequate medical care or in riots. Three prisons for teenagers were shuttered between 2000 and 2012 after discoveries of squalor and sex abuse. A women’s prison was emptied after widespread reports of rape by staff.

How does this compare to prisons that are not run by private companies for profit?

At Florida’s state-run prisons in the same 12-year period: No major damage or severe injuries from riots; no closures over squalor; no Justice Department investigations over human rights.

In another example in Mississippi, a private company called the GEO Group ran the Walnut Grove Youth Correctional Facility. The Justice Department spent two years looking into conditions at the facility and issued a report saying the facility engaged in “systemic, egregious and dangerous practices.” A judge wrote the company "has allowed a cesspool of unconstitutional and inhuman acts and conditions to germinate, the sum of which places the offenders at substantial ongoing risk."

(Listen to an NPR report on this here.)

A recent In the Public Interest report, The Costs of Private Prisons, says “the promised cost savings often fail to materialize.” The report looked at more than 40 studies of private prisons and how this turned out, in five states. They found “no cost advantage” and that for-profit prison companies, “employ questionable methodology when calculating costs of private facilities. This includes finding ways to hide the costs of private prisons, ensuring that increased costs are not apparent until after the initial contract is signed, and using inflated public prison costs during comparisons.”

Cost overruns are a common scam when governments outsource to private companies.

In 2008 New York City decided to “save money” by contracting out its payroll system. The original estimate to develop the “CityTime” system was $68 million. A little over 10 years later the cost had ballooned to more than $700 million and the system still didn’t work. A recent Daily Kospost descibed what an investigation revealed:

The corrupt contractors lined their pockets with millions of dollars as they accepted kickbacks, funneled huge sums into shell companies, deposited stolen money into overseas accounts, inflated bills and maintained a bloated payroll with excessively paid and even fired employees.

The contractor, Science Applications International Corp. has agreed to pay the city $500 million“under a deferred-prosecution agreement to resolve claims that it conspired to defraud the city.” Three employees were recently sentenced to 20 years each for their roles in the theft and fraud.

5. Any Government “Outsourcing” Anything

The first way companies are supposed to be better is cost-savings. But just how do they save money? There are two ways a company can save money over what government spends. The first is to reduce what it pays employees and suppliers. The second is to cut back on the amount or quality of the service the company is taking over.

So let’s say a town decides to “save money” by outsourcing its trash collection. The people who were employed by the city to do this are laid off and things are turned over to the company. Typically the company will hire people at as close to minimum wage as possible and likely with no benefits. It will employ fewer managers and pay them less as well. It will cut back on maintenance of the fleet, and it will try to cut back on the pickup service.

Does this actually save government money? If people with OK public-employee jobs are replaced by lower-paid workers the community is poorer in the aggregate. More people will need public “safety-net” services. There will be foreclosures. Tax revenue drops because of lower pay but also because poorer people can’t spend as much in stores. Sales taxes drop as stores face fewer customers able to get by.

Daphne Greenwood of the University of Colorado did a study of privatization titled, The Decision to Contract Out: Understanding the Full Economic and Social Impacts. The study found that the resulting wage and benefit cuts hurt the community at large, including declining retail sales, greater reliance on public assistance and a larger share of at-risk children in low-income families. On a recent phone call discussing the study Greenwood said that when governments outsource, “the availability of middle-class jobs is affected, even upward mobility.” She said, “Contracting to private corps usually means big reductions in worker benefits and benefits,” and “lower wages often mean a shift to less experienced employees.”

In addition, she said, “There are more workers and retirees who end up on public assistance, which means more children in poverty so local schools are dealing with more problems.”

Janice Fine of Rutgers University has also done a study, Overlooking Oversight: A Lack of Oversight in the Garden State is Placing New Jersey Assets and Residents at Risk. She looked at outsourcing in New Jersey and found that a “stunning lack” of government oversight of contractors caused problems for Hurricane Sandy victims as well as greater risk for vulnerable children – and millions in wasted tax dollars in New Jersey.

On the same call as Greenwood, Fine said she found, “a stunning lack of government oversight of contractors,” and that, “oversight shouldn’t be set aside because of cost, it should be an essential part of outsourcing.”

Government outsourcing, also known as privatization, has been going on for decades, and now governments are reassessing whether turning public property and services over to private companies has really been a good idea. Story after story has appeared detailing horror stories of corruption, incompetence and general scamming by companies interested only in profit. Molly Ball reported recently in The Privatization Backlash in the Atlantic, “In states and cities across the country, lawmakers are expressing new skepticism about privatization, imposing new conditions on government contracting, and demanding more oversight. Laws to rein in contractors have been introduced in 18 states this year, and three—Maryland, Oregon and Nebraska—have passed legislation, according to In the Public Interest, a group that advocates what it calls 'responsible contracting.'"

A report by In the Public Interest titled “Out of Control: The Coast-to-Coast Failures of Outsourcing Public Services to For-Profit Corporations,” highlights several other horror stories that happen when local and state governments privatize public functions to private companies. The report begins,

“Eager for quick cash, state and local governments across America have for decades handed over control of critical public services and assets to corporations that promise to handle them better, faster and cheaper. Unfortunately for taxpayers, not only has outsourcing these services failed to keep this promise, but too often it undermines transparency, accountability, shared prosperity and competition – the underpinnings of democracy itself.”

The next time someone tells you private companies are always “more efficient” than government, tell them the facts are against them. It has been tried and it didn’t work.