It's all a lie: Inside John Boehner's twisted immigration cowardice

Hopes for immigration reform rest on the speaker's self-interested refusal to act. Here's what happens next 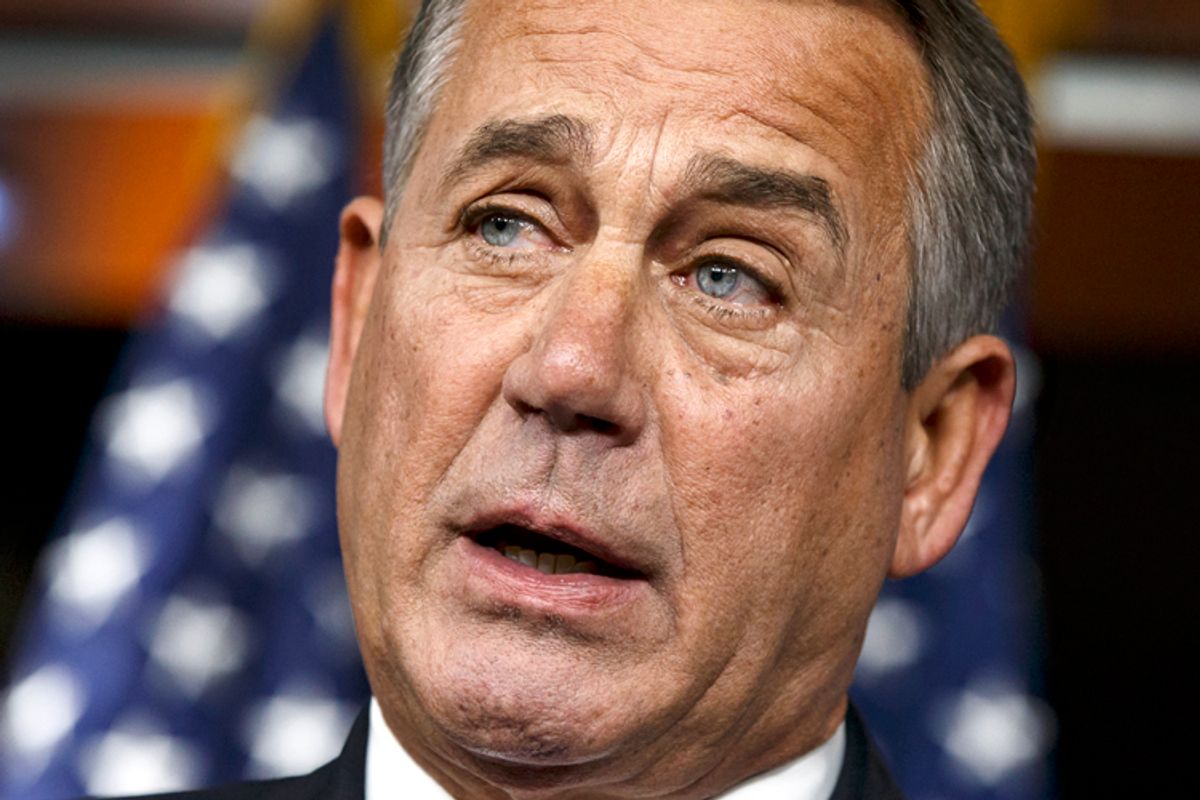 Once again, there’s said to be a thin ray of hope for immigration reform gaining passage this year. And once again, any hope of passage rests with one man: John Boehner. “Republican and Democratic advocates see one final, long-shot chance to pass immigration reform this summer, and its fate rests with a Speaker stuck between his party’s resistance and his search for a career-defining legacy,” reports the Hill.

We’ve heard this same story many, many times before.

“Speaker John Boehner (R-Ohio) is voicing confidence in the prospects for immigration reform in the House,” the Hill reported in January 2013.

“Speaker John Boehner gave a sliver of fresh insight into his thinking about immigration reform, saying he thinks legislation will pass the House before Congress has to wrestle with the debt ceiling,” Politico reported in July 2013.

“Speaker John A. Boehner of Ohio has signaled he may embrace a series of limited changes to the nation’s immigration laws in the coming months,” the New York Times reported in January of this year.

Each time the “Boehner may back immigration reform” balloon goes up, it gets popped, often by Boehner himself.

It always comes back to Boehner and the will-he-won’t-he decision he keeps putting off. The fact that any immediate hopes for reforming the grossly dysfunctional immigration system rest with this self-interested coward should be enough reason to believe that nothing will happen any time soon.

Boehner wants to pass immigration reform.  But he can’t, explains the speaker, because there’s a trust gap between Barack Obama and the House Republicans. Boehner says his caucus can’t sign on to any reforms until they can trust Obama to enforce the law and evict as many brown people from the country as possible. “The American people and including many of my members don’t trust that the reform we’re talking about will be implemented as it was intended to be,” Boehner has said.

Try to envision a scenario in which the House Republican caucus could be described as “trusting” of the president. Right now they’re a hair’s breadth from filing articles of impeachment over the Benghazi coverup they know happened but can’t prove. Boehner’s setting a bar for action on immigration that he knows is impossible for Obama to clear.

If there is a problem with trust, it’s safe to say that it emanates from the Republican adherence to a maximalist position on border enforcement and deportations. Forget Obama – it’s doubtful that any person sufficiently moderate enough to win the presidency could also win the trust of the House Republican caucus on immigration.

“President Bush tried on Tuesday to win back the trust of conservatives who have distanced themselves from him on immigration,” the New York Times reported in June 2006, describing Bush’s swaggering rhetorical sops to the immigration hard-liners in his own party.

Even after Bush promised a whole host of enforcement measures, the House Republicans viewed Bush as weak on enforcement and too eager for “amnesty,” so they ditched his reform proposals in favor of draconian border-security-first measures and denied him a much-needed political victory.

The better way to view Boehner’s immigration maneuvering is in the context of the political battles he’s fought since becoming speaker. On immigration, Boehner is faced with two bad options: pass a reform bill, risk fracturing his own caucus ahead of the midterms, and put his speakership at risk; or do nothing and see his party’s reputation with Hispanics sink even further. Boehner has lots of experience when it comes to no-win situations, and he tends to draw them out for as long as possible to appease his unruly conservative members (and absorb tons of political damage along the way) before being forced into a resolution.

In late 2012, as the fiscal cliff loomed, Boehner was tasked with negotiating on inevitable tax increases while keeping happy a caucus that refused to accept any tax hikes whatsoever. As the deadline approached, he withdrew from negotiations and proposed his own tax plan that raised rates on just millionaires, but it failed because his own caucus wouldn’t support it. He adjourned the House, punted responsibility to the Senate, and ended up passing the final fiscal cliff package with the vast majority of his members in rebellion.

In the spending fight that led to the government shutdown, Boehner was against using spending bills to force a showdown over funding of the Affordable Care Act and tried to convince his members that it was a bad idea, but he got buffaloed by his own caucus. The House passed a bill delaying implementation of the ACA, triggering an impasse that precipitated the shutdown. The shutdown dragged on for more than two weeks during which the GOP took a pounding in public opinion polls. Boehner finally relented and passed a clean bill to fund the government, again with most of his caucus in opposition.

On comprehensive immigration reform, a similar dynamic exists. Boehner reportedly wants it to happen. The House GOP wants the border locked down first. Boehner doesn’t want to anger the conservatives, so he defers action while expressing hope that reform will happen soon. When faced with no good choice, he makes no choice.

On issues like the fiscal cliff and the government shutdown, Boehner only acted when his hand was forced by a manufactured crisis situation. Unfortunately for proponents of reform, there is no crisis point scheduled for immigration policy that will move Boehner to act on his own convictions.