"Louie" has a black ex-wife, but is she anything more than a type? 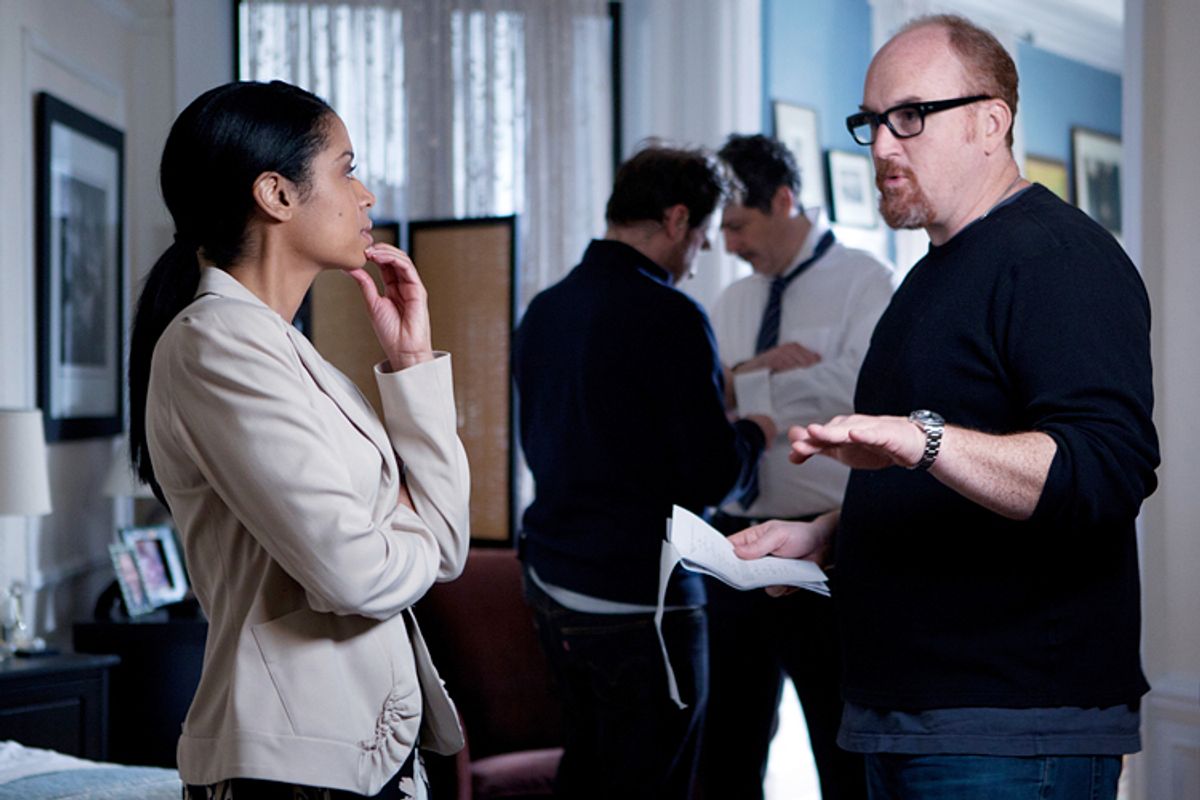 The first of next week’s back-to-back episodes of “Louie” focuses on the comic’s varying degrees of difficulty communicating with the women currently in his life. He discovers an unexpected commonality with a much older neighbor, played by Ellen Burstyn. He successfully extracts information from his emotionally distraught young daughter, Jane. He even manages to bond romantically with his neighbor’s niece, a Hungarian woman who does not speak a lick of English. The only person Louie cannot seem to connect with is his ex-wife Janet, portrayed by actress Susan Kelechi Watson as a successful, but somewhat cold and inflexible, working mother. Were Janet to be played by a white woman – white like Louie himself and his two show daughters – her iciness would probably read as simply a component of the character or, at the worst, an unflattering reflection of Louis C.K.’s relationship with his real-life ex-wife. But because Watson is African-American, it is difficult not to flinch at the fact that her character coincides rather disturbingly with the stereotype of the angry black woman.

When Louis C.K. first announced two years ago that he had cast a black woman as the mother of his two clearly white daughters, it was viewed as a bold and unconventional move. The creator and star of the show was heralded for giving his audience the benefit of the doubt in suspending their disbelief and commended for looking past the accepted norms in casting a significant part. But the more we see of this character, the more it seems that the choice may not have been so colorblind and unconventional after all.

In these two upcoming episodes of “Louie,” “Elevator,” parts 2 and 3, the titular schlub has all manner of surprising and awkward, but not wholly unpleasant, interactions with several women. (Recurring guest Pamela Adlon, while ridiculing him, is still cute about it.) In his exchanges with his ex-wife, however, Janet is so unflinching and joyless as to appear almost one-dimensional – even as Louie, presumably a man she once cared deeply for, melts down into a puddle of confused emotions right in front of her. She even seems to treat the subject of their disagreement – how to proceed with troubled Jane’s education – with an uncomfortable amount of emotional distance. The narrowness of this portrayal borders on caricature, one that is not particularly funny but all too familiar and pervasive enough to have its own Wikipedia page.

The truth is, it was obvious from the beginning that Louis C.K. may have been suffering under the same prevailing impressions that have plagued African-American women for years. At the time of the casting, C.K. described to Jimmy Fallon the difference between the character and his actual wife. “This woman is harsher on the show. And she puts a lot of pressure on me. Like, she’s a professional, and she wants me to kind of step up.” Black women -- especially professional black women -- are often depicted as being hard on their men, but, certainly, any woman who shares custody of her two children with a freelance comedian might share the same concerns about his career. It was his next statement that alarmed folks like Stacia L. Brown at Clutch: “So, there’s like a scene there later in the season where she’s, she’s trying to get me to get a real job,” C.K. told Fallon. “And when a black woman tells you to get a job, it’s just more … ‘Get a job,’ it just hurts more.”

As Brown and too few others pointed out, there is simply no way to interpret that comment that doesn’t hint at preconceived notions of black femininity, most of them negative and even hurtful.  “Elevator,” parts 2 and 3, anchored by a lovely recurring part for Ellen Burstyn, paint beautiful, subtle – even loving – portraits of women of all ages and backgrounds. Janet is unfortunately and conspicuously excluded from that careful treatment. If Louie has no plans to beef up that character beyond a faulty, prefab silhouette, then it is, at the very least, time for Louis C.K. to confront and wrestle with his own preconceptions, much in the way he did with last week’s “So Did the Fat Lady.”