Why are game show hosts all conservatives? Pat Sajak is part of an elite club 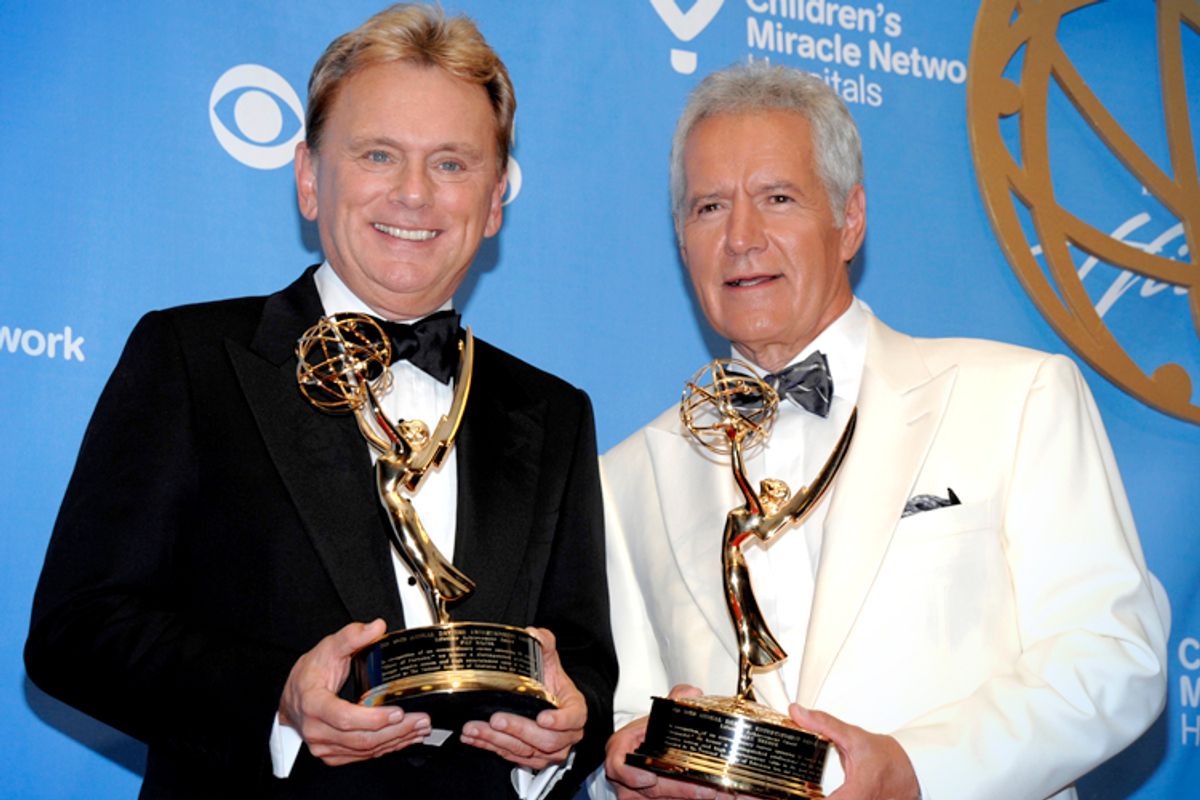 It's hardly news that "Wheel of Fortune" host Pat Sajak is an ardent conservative. He wrote, for instance, several articles with headlines like "Opposed to Obamacare? Then You Must Be a Racist" for the website Human Events between 2007 and 2013. But his latest rhetorical flourish is the most bizarre yet.

Sajak's unhinged denialism -- throwing wild allegations of racism against the overwhelming majority of scientists, for instance -- exists only within the context of his own Twitter feed and writing online, where he's perpetually making purposefully incendiary remarks wildly at odds with his sunny on-air personality.

But Sajak's hardly alone as a prominent conservative who saves his vitriol for the off-air hours. Alex Trebek, of "Jeopardy!," cited, in a recent New Republic profile, someone speaking approvingly of the Tea Party: "Somebody was saying on television a few days ago that the Tea Party is a reflection of the people. There are a lot of people out there who are not happy with the way things are going, and they’ve banded together." He seemed curious about the arch-conservative movement if not explicitly approving, describing himself as apolitical even despite having reportedly hosted a 2010 Republican fundraiser.

Drew Carey, of "The Price is Right," has been an outspoken libertarian since his sitcom-actor days, telling Reason magazine: "As far as your personal goals are and what you actually want to do with your life, it should never have to do with the government. You should never depend on the government for your retirement, your financial security, for anything." Bob Barker is better-known for his animal advocacy than for his endorsement of conservative lobbyist David Jolly in last year's House special election in Florida. Chuck Woolery, the original host of "Wheel of Fortune," is as active as his successor on Twitter and has written for the Washington Times.

But is it that surprising these fellows trend towards conservatism? For one thing, they're older, affluent white men -- a group that, outside of Hollywood, doesn't vote Democratic, at least not lately. And these men are as outside-of-Hollywood as you can get while still being paid to be on camera. Sajak has spent decades suffused in a self-consciously retrograde environment in which his female co-host's role is to silently smile in a brand-new evening gown and his role is to cheer on contestants to win money on the basis of merit.

On game shows -- so the thinking goes -- there's no such thing as luck; indeed, FCC rules prohibit game shows from stacking the deck in favor of one contestant or another. And so it is that game show hosts might extrapolate from their experience that luck is not particularly meaningful, that accumulation of wealth is based on one's abilities at playing a game that's the same for everyone. (Certainly Alex Trebek has extrapolated from "Jeopardy" results fundamental ideas about gender essentialism.)

Or maybe it's that exactly the sort of folks who appeal to the widest possible audience, or are perceived to by syndication executives and producers, are stolid and square, the sort of conservatives who a generation ago would have been Reagan supporters right in the center of the mainstream and only recently in an era of anti-science and anti-Obama mania have found themselves venting some rage online. In any event, we can only hope that "Billy on the Street" host Billy Eichner doesn't have any secretly-held beliefs about climate change.