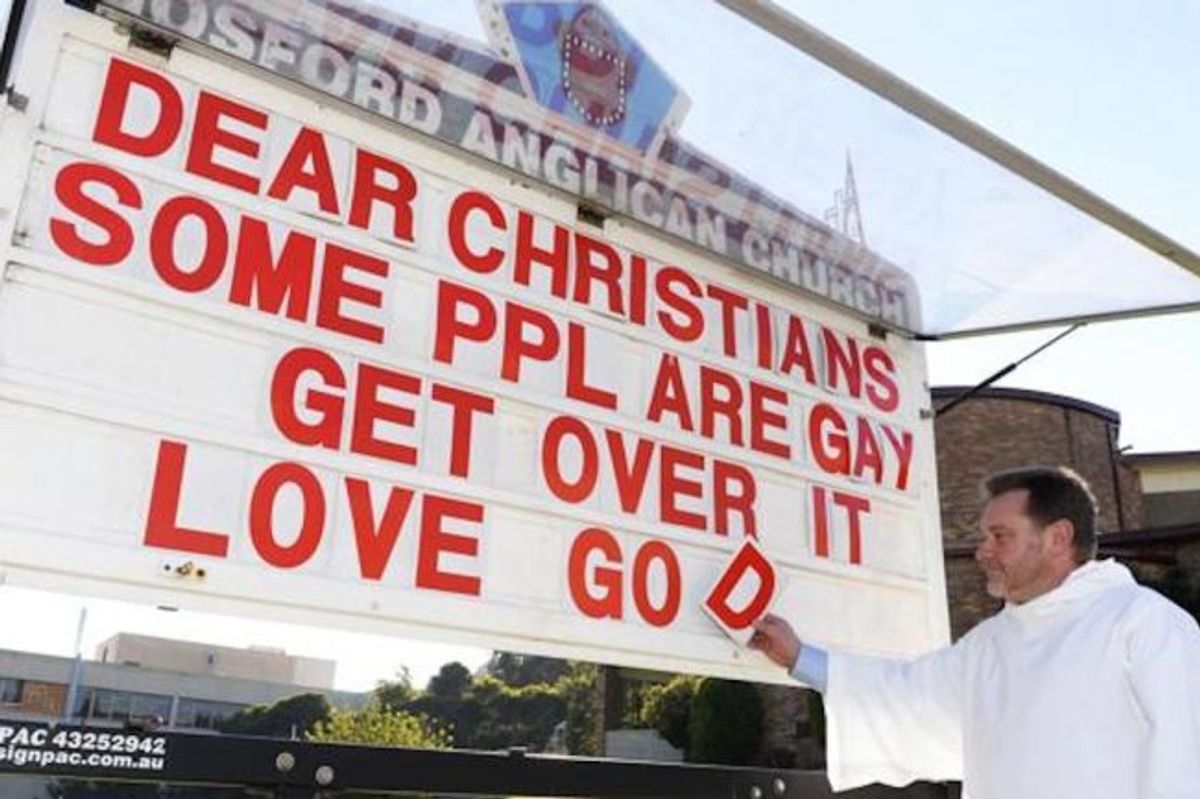 But one whose influence is now on the rise is Father Rod Bower, of the Anglican Parish of Gosford, north of Sydney.

In an age of digital everything, Father Rod serves up his thoughts via an old-style church announcement board, with movable letters — the sort of sign that appeals to your inner guilt as you drive through rural Alabama.

And then he lets the internet take over.

Bower’s messages have gone viral on social media. That might be because having a man of the cloth on their side energizes Abbott’s embattled critics, less than a year after Australians voted him into office. And it might be because of the wit and heft the messages wield in under 50 characters — a length that makes Twitter seem wordy.

When Father Rod speaks, people listen. His parish now has more than 10,000 followers on Facebook and its billboards are seen by hundreds of thousands more via social media. Not bad for a local church.

It’s Abbott’s social conservatism and his hard-line stance on what Father Rod calls “issues of compassion” that have inspired some of the more popular — and most controversial — billboards.

Abbott, who has described homosexuality as a “fashion of the moment,” is a staunch opponent of gay marriage. He has promised to settle the “war” on asylum seekers by “sending them back to the country from which they came.”

Signs like these have cemented the parish’s reputation as:

Father Rod’s billboards used to always look like this:

But that all changed when he was called to the bedside of a dying man over a year ago. “While I was there I kind of worked out that this guy was gay,” he says. “I said ‘Does he have a partner?’ and they got all coy and said ‘yes.’ So I said, ‘Is he here?’, and they said ‘yes’ — they’d hidden him away in another room. I said, ‘For God’s sake, bring him out.’

“It was at that point that I said I’d had enough. I’d had enough of people assuming Christians were all anti-gay and right-wing. I came straight back to the office and put up a sign that said:

And that’s what started the ball rolling.

“It caught us by surprise. Before that first sign we had 150 people on our Facebook page, and I think they were mostly parishioners who felt sorry for me,” he says. “Within a couple of months it had gone to 3,000 and it’s just kept going.

“I think people appreciate what we’re doing because they now feel there’s a voice being heard by up to 300,000 people a week that expresses some of their views and frustrations, and some of their hopes and aspirations as well,” he said.

Father Rod is shaking the world Down Under right now.

At Christmas, he posted this:

The country operates a number of offshore detention centers and sends all new boat arrivals to Manus Island in Papua New Guinea — a center critics liken to Guantanamo Bay.

Here, asylum seekers — many proven to be genuine refugees from strife-torn countries, who are entitled to rights and protections under international law — are often locked up for years under what appears to be more of a deterrent policy than a genuine effort to resettle refugees.

Most recently, Australia agreed to send refugees to Cambodia, a country with its own questionable human rights record.

Finally, he posted this:

“I’ve been accused of being a left-wing stooge,” he says. “I have no party political leanings whatsoever, to be honest. What I’m more concerned about is a society that’s based on some form of compassionate expression.

“At least once a week we get a call for a comment on something Tony Abbott’s said. He’s supplying a lot of material for us at the moment, though of course he’s not even trying,” he says in reference to Abbott’s blanket ban on releasing information to the media and even to parliamentary enquiries about asylum operations, “he’s trying to be very disciplined about not saying anything at all.”