The right's most ridiculous Elizabeth Warren smear to date

Conservatives can label her a leftist all they want. She's a threat because she stands in the way of U.S. oligarchy 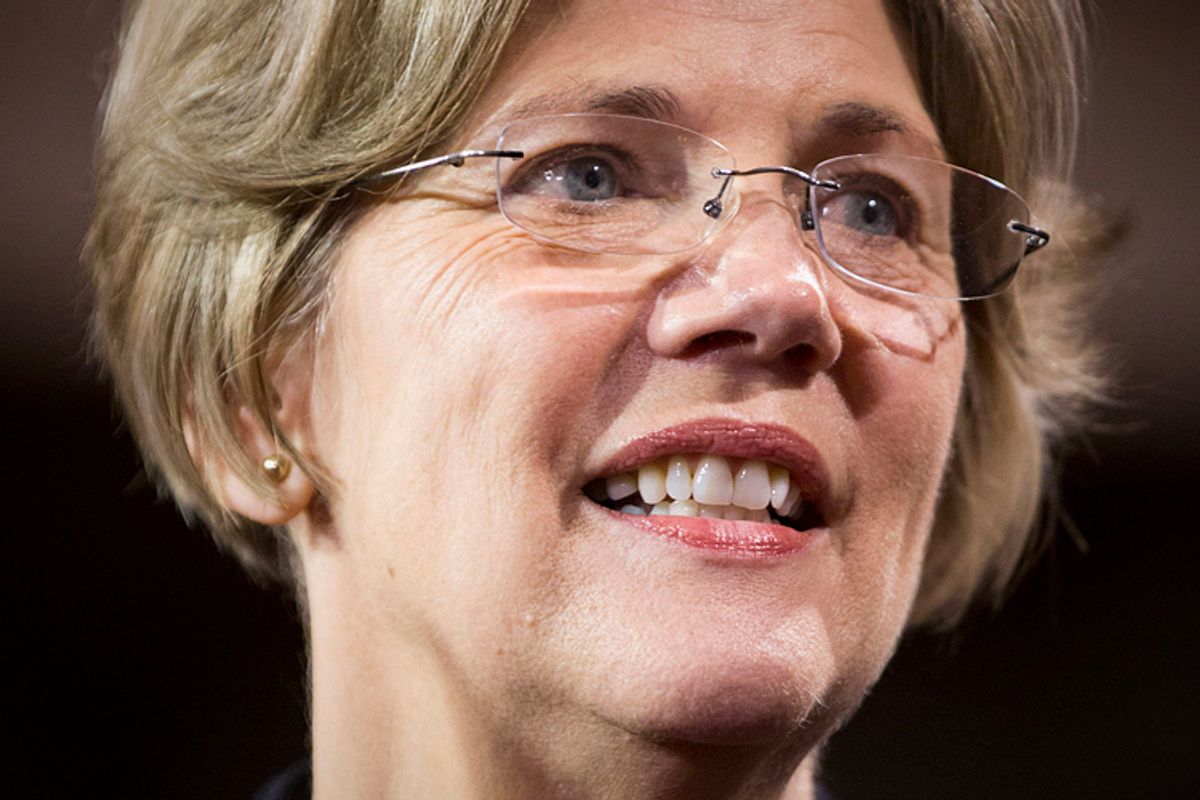 Have you heard the one about Senator Elizabeth Warren (D-MA) being a leftist? Branding the junior senator from the U.S. state of Massachusetts with that term suggests to the rest of the world that she must be close to the camp of the Fidel Castros or some other anti-capitalist revolutionaries.

Just what is Mrs. Warren’s crime that warrants such castigation? Speaking up for the concerns of everyday Americans — consumers, debtors, working people, that’s what.

As the founding spirit behind the long-overdue establishment of the Consumer Financial Protection Bureau , Senator Warren saw to it that today’s Americans are finally able to avail themselves of the same consumer rights that have been considered as givens by their counterparts in Europe since the 1970s.

What makes the charge of labeling Warren a leftist almost comical is that, when Europeans started to pursue the issue of consumer rights, they were eager to emulate the world leader of the consumer movement at the time — the United States.

Since that time, the United States has pretty much abandoned one of its smartest inventions — and left it to the Europeans to carry the flag of consumer rights forward . (Note that a key reason why the European Commission is so reflexively maligned in the U.S. media is precisely that it has established itself as the key body to provide a check on expanding corporate powers in Europe and beyond.)

In modern mass societies, working on these issues is a truly vital matter.

It ensures that a nation’s citizens do not become powerless automatons who are haplessly pushed around by big corporations, pretty much at the latters’ free will.

Sadly, that is precisely what has happened in the United States ever since the days of the (mislabeled) “Reagan revolution.” The goal of Reagan’s backers was really the polar opposite of a revolution — moving the social progress achieved until then back as much as possible.

Since the early 1980s, the large corporations of America have seen to it, in a close collaboration with an ever-pliable U.S. Congress, that any further spreading of that consumer rights movement got stopped in its tracks.

If Senator Warren has one core conviction, then it is that the American people have lost out greatly in that process. Her desire — to restore at least a modicum of equivalence in that very imbalanced arms race — is only sensible.

Such equivalence is, in fact, the lifeblood of modern capitalism. As an economic system, it becomes all the better the more the various players are held to key rules and standards. Otherwise, what should be the smartest economic model deteriorates into a race to the bottom.

As things stand in the contemporary United States, corporations are handed the keys to the castle. For the latest evidence, just consider the fraudulent cover-up at General Motors and the criminal agreements among Silicon Valley titans not to compete for each other’s pool of employees.

In such an environment, three things suffer: sustainable economic growth, the general welfare of the people — and capitalism itself.

Standing in the way of the U.S. oligarchy

The superiority of the capitalist system rests on the notions of accountability, efficiency and fair competition. If Senator Warren stands for three elements, then it is these matters. Thus, properly understood, she is an ultra-capitalist.

Her detractors, properly understood, are the West’s equivalent of Russia’s oligarchs. They are people who operate in a shadowy and at least partially criminal world of oligopolies and like to engage in unsavory, non-transparent business practices.

For all their glitz and innovation, people like the Marc Zuckerbergs and Eric Schmidts often are also driven by a truly toxic combination of preferred business practices. They combine extreme rent-seeking, gross privacy violations and other characteristics that are more reminiscent of 19th century Manchester capitalism than any of its more modern variants.

Given all that, shame be indeed on Elizabeth Warren. How dare she interfere with such a nicely rigged game that so handsomely benefits all the insiders?