"Breaking Bad" isn't content! Why we need to stop using this terrible noun 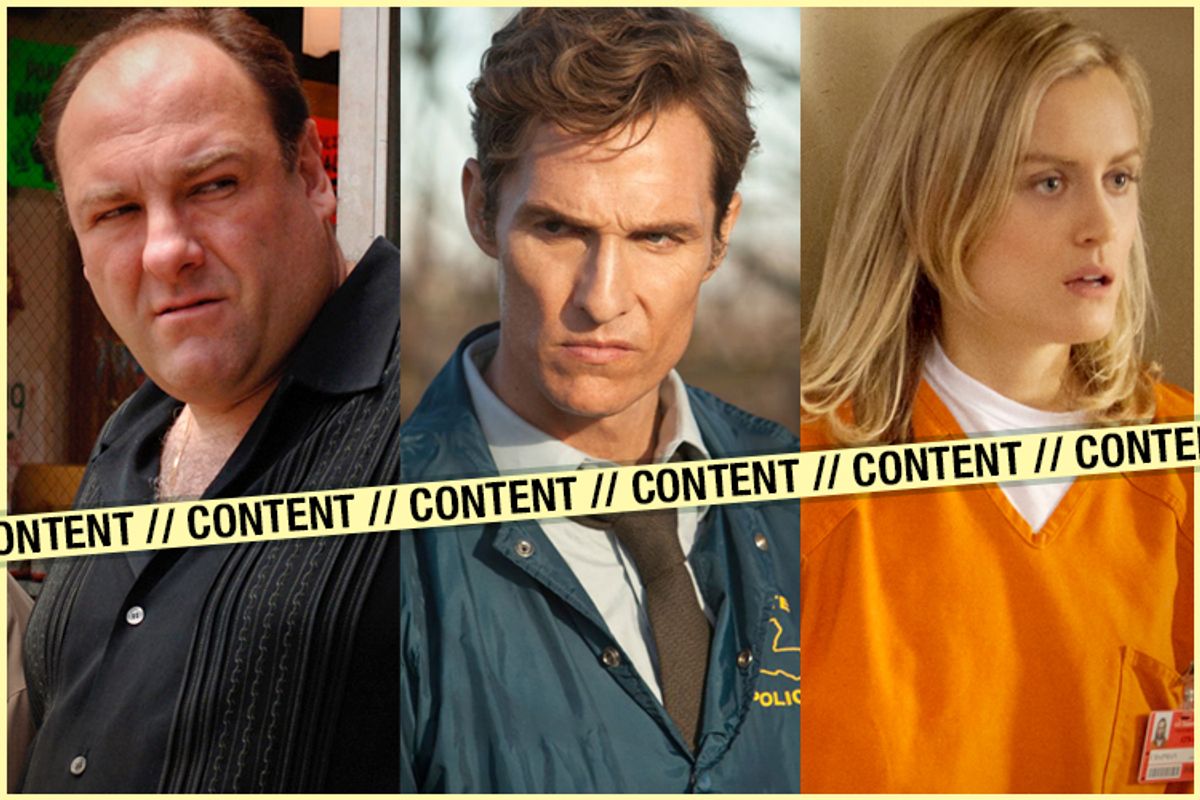 James Gandolfini in "The Sopranos," Matthew McConaughey in "True Detective," Taylor Schilling in "Orange Is the New Black" (HBO/Netflix/Salon)
--

"Vocabulism" is a Salon series about how the internet is killing the English language, one word at a time.

The Hollywood Reporter recently published a piece on fall television “upfronts” -- the confabs that announce and advertise new shows for the fall season – in which it proclaimed that the TV business had been upended by “a blizzard of quality content.” CBS Entertainment chairman Nina Tassler told the magazine that “for us, it really is about having great content all year round.” Meanwhile, a Variety piece on the same topic quoted Turner ad sales chief Donna Speciale: “Consumers are accessing more content across more screens than ever before. TV, online and mobile content is all coming together.” And a recent blog post published by Hulu featured a section heading titled “Content,” which trumpeted the website’s move into original programming. To increase awareness of its new shows, the post promised, “we will more than triple our content marketing spend to grow awareness for, and interest in, Hulu Originals.”

These are a mere handful from a bottomless pit of recent examples. But they illustrate an inescapable and unsettling truth: “Content” has become a defining noun, perhaps the defining noun, of our scattered media moment. You can’t swing a dead cat without hitting an executive nattering on, mid-sentence, about great content, shareable content, clicky content, or (retch) viral content. But make no mistake: “Content” is sterile, vague and insulting to the creative process. And to top it all off, it’s unnecessary.

Unlike some of its even more nebulous cousins in buzzwordery (“curate,” anyone?), “content” does still kind of mean something, at least nominally. To employ my own hoary cliché: Merriam Webster’s defines the word, primarily, as “something contained -- usually used in plural.” Note the dictionary’s third, charming definition: “the principal substance (as written matter, illustrations, or music) offered by a World Wide Web site.”

Content, in other words, is stuff. That definition of it isn’t new in the media world -- remember the dead-tree magazine Brill’s Content, which shuttered way back in 2001? But in our atomized landscape of consumption, “content” has come to be a catch-all, specifically, for the stuff people create -- the stuff that keeps customers coming back to TV channels, websites, movie theaters and anywhere else they might part with a few dollars or at least build some brand loyalty. The stuff often referred to as “original content.” That kind of stuff, as any media analyst will tell you, is increasingly important to companies -- particularly ones like Netflix who are hoping to rely less on licensing deals and more on their own creations.

But one of the reasons “content” rankles, aside from its inherent blankness, is that there’s a problem with using such a one-size-fits-all kind of word to describe so many different kinds of stuff. There’s a wide gulf, for instance, between an exquisitely written, carefully plotted television series like “The Sopranos” and a Vine series about four singles trying to make it in New York City. (I’m assuming that exists.) Yet in the press release announcing Amazon’s recent partnership with HBO, Amazon’s Brad Beale said that “HBO original content is some of the most-popular across Amazon Instant Video—our customers love watching these shows.” Beale’s actual title is “director of content acquisition for Amazon,” so I suppose one can’t blame him for resorting to the C-word. But why must we resort to such soul-killing phraseology when there are plenty of better words available? Like “programming”? Or “shows,” which Beale drops later in the sentence? Is there something so wrong with just calling stuff what it is?

“Content” brings to mind an economics professor’s example of a fictional company that sells “widgets”: those make-believe units of, well, it doesn’t matter what they are -- that’s the point -- to illustrate some elementary point about supply and demand. Content is the modern-day widget, a “thing” that will be beamed, or streamed, or published, for you, the consumer, to consume. Even if the content is good content, its labeling as such makes the entire consumption process feel unnecessarily gross, like a fly in your artisanal sandwich.

Look: Robots are probably about to take over all our jobs, and the world is on the verge of drowning. But I don’t think we need to start speaking dystopian language before the apocalypse happens. If we must noun-ify “content,” I propose we save it for the … stuff that’s depressing enough to deserve the moniker. Think of “content farms,” the not-so-useful websites that peaked a couple of years back, whose sole aim is to game Google search results for traffic. Just that phrase —  “content farm” — conjures up a (largely accurate) image of a million monkeys typing on a million typewriters, hoping to divine the right series of words that will get you to click on a tutorial about how to tie a tie. Now that is stuff for the sake of stuff. And that stuff deserves to be called “content."