Why is their group giving millions to stop bipartisan bankruptcy settlement for Detroit? The details are harrowing 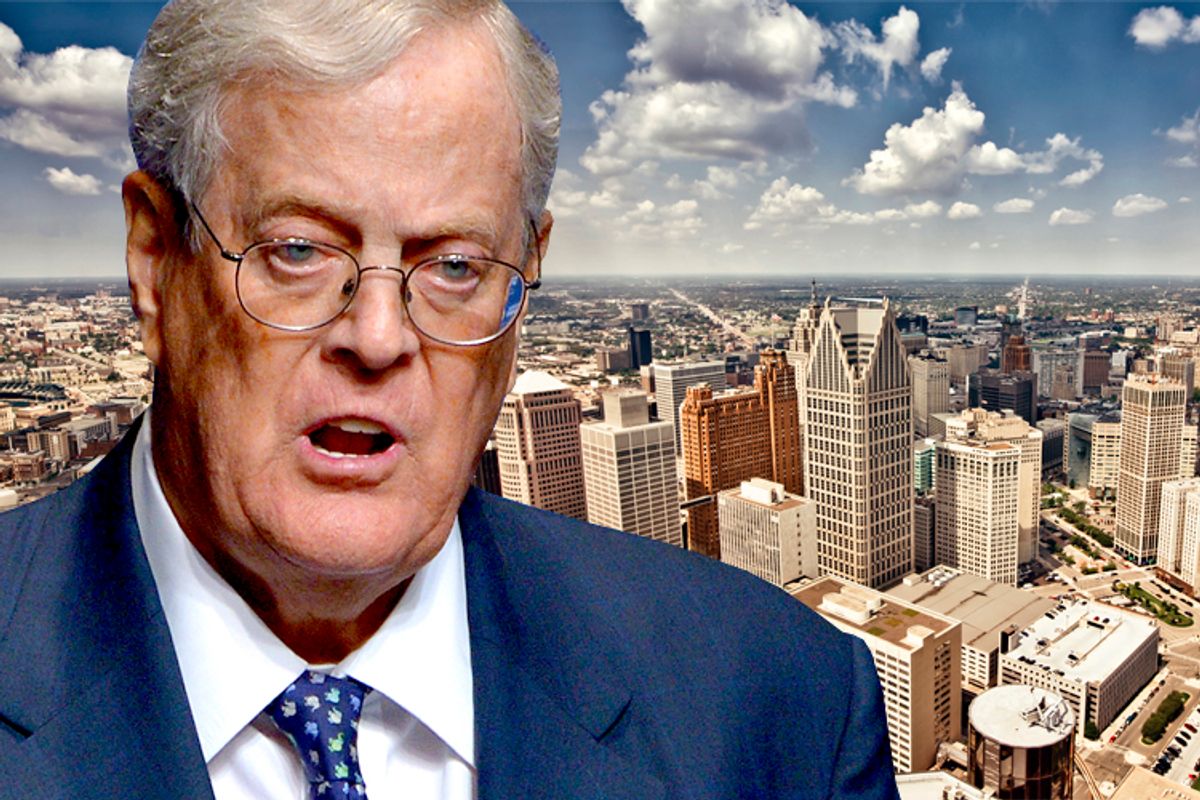 Ta-Nehisi Coates has written the day’s must-read on the legacy of slavery and white supremacy. It focuses on Chicago, and reminds all of us how white mob violence plus white “flight,” backed by discriminatory federal lending policies, kept African-Americans out of many city neighborhoods, and doomed the neighborhoods in which they were allowed to live and buy. It also reminds us that the first “race riots” weren’t what we now mostly associate with the term -- the black urban uprisings of the ‘60s --  but white violence against black people and black property, from Tulsa, Oklahoma, to Rosewood, Florida, to Chicago and a horrifying example he happens not to mention: Detroit in 1943.

It’s against that backdrop that the Koch brothers’ new crusade against a landmark bipartisan settlement of Detroit’s bankruptcy crisis seems particularly greedy and cruel. After much controversy and debate, Michigan’s Republican Gov. Rick Snyder has agreed to provide $195 million in state funding that will limit pension cuts to no more than 4.5 percent and protect the Detroit Institute of Art from liquidating its collection.

“This is a settlement. This not a bailout,” Snyder said. “And I want to be very, very clear about that.”

Not so fast, Gov. Snyder. Americans for Prosperity has built a shiny website, shamelessly named StrongerDetroit.com, that shrieks “NO MORE BAILOUTS.” It has committed to contacting 90,000 Michigan conservatives to get them to tell their Republican representatives to buck Snyder and (what rhymes with buck?) Detroit. The group promises to run ads against any Republican who votes in favor of the bankruptcy settlement.

Remember, Snyder is no bleeding-heart liberal; far from it. He has come under fire from Democrats and civil rights advocates for his heavy-handed use of executive power to put the finances of struggling Michigan cities, including Detroit, under state control, often usurping the power of African-American elected officials. In 2012, he flip-flopped on campaign promises to oppose an anti-union right to work law, signing the bill much loved by the Koch brothers.

As the New York Times’ David Firestone notes, even leaving aside the long history of racism that hobbled Detroit, the state bears some blame for the city’s fiscal troubles, cutting revenue sharing while the city’s own tax base eroded. Demos found that those revenue sharing cuts accounted for one-third of the city’s revenue losses between 2011 and 2013.

Of course, Detroit bashing has long been a staple of right-wing rhetoric, in which the city’s troubles are solely the fault of poor choices and corruption by its African-American leaders and the moral faults and bad behaviors of its African-American residents. Dog-whistling about Detroit continued during the 2012 GOP primary, you’ll recall, when Newt Gingrich declared: “I know how to make the whole country look like Texas. President Obama knows how to make the whole country resemble Detroit."

But some Michigan Republicans are tuning out the dog-whistling and Koch-whining. Foundations and arts benefactors have pledged $466 million for the deal, while the United Auto Workers and the Michigan Building and Construction Trades Council have pledged to contribute to the settlement. That has won over Republicans who said they’d oppose the deal unless unions coughed up money too.

The vote could come as early as Thursday. The GOP House Speaker Pro Tem John Walsh (no relation) believes he has the votes to at least get the bill to the state Senate, arguing the deal saves the state money in the long run. "We have conservative estimates that if we can't reach settlement and there are more cuts to pensioners, the state will realize over 20 years over $250 million in social safety costs," Walsh told reporters. "These are people that will fall into the social safety net, because we're not talking about wealthy people at all. We're talking about people who are barely making it."

But the Kochs don’t care about people who are barely making it. Firestone puts it better than I can.

The Koch brothers apparently want city workers and retirees to publicly suffer for the sin of having been union members. They want bondholders and insurance companies at the front of the creditors’ line, and don’t seem to care if the Detroit Institute of Arts has to sell off its paintings and sculptures to put them there. As they have in so many other areas of public life, two of the country’s wealthiest citizens are using their good fortune to make life far more difficult for those at the bottom of the ladder.

It would be great to see Michigan Republicans reject the avaricious global titans meddling in local affairs. Stay tuned.