Not so fast! Before David Barron's nomination, secret drone opinions must be digested

Before he nabs a lifetime job that depends on his honest, independent judgment, let's really look at his record 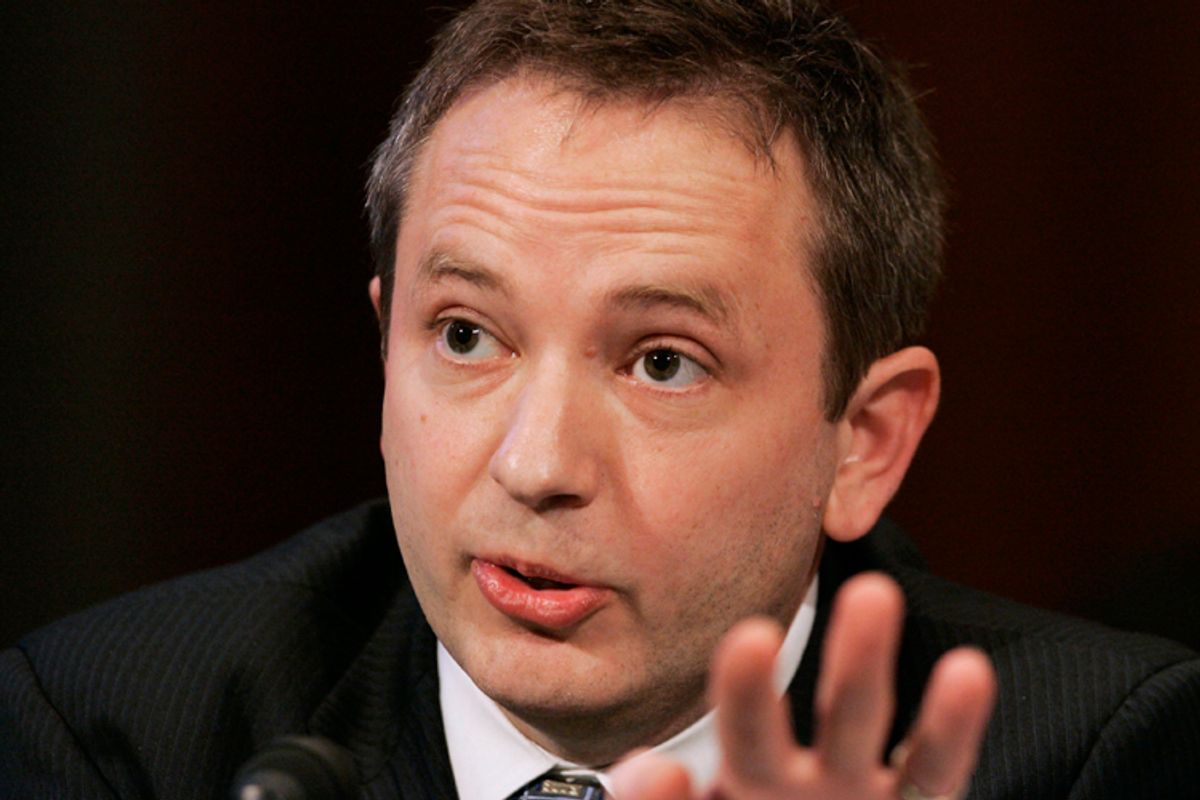 Last fall, President Obama nominated Harvard law professor David Barron to a lifetime appointment as a judge on the First Circuit Court of Appeals. That nomination received close scrutiny and some criticism, as it should have, but it is now expected that the Senate will confirm the nomination after voting yesterday to push the nomination forward. Given his credentials, he is no doubt smart enough to be a federal judge. But before he slides into a lifetime job that depends on his honest, independent judgment, the public should get a clear view of how he exercised that judgment during his service in the Obama White House.

Barron’s path to the federal judiciary had him pass through a secretive office in the Department of Justice called the Office of Legal Counsel – or “OLC” for short. The purpose of the OLC is straightforward. It sits as a de facto court within the White House that decides the legal questions that set the boundaries for how the federal government runs day-to-day. Be they the highest Presidential appointee or lowliest bureaucrat, a government official who complies with the OLC’s opinion is wholly immune from later prosecution or liability. And at the beginning of the Obama Administration, Barron decided questions that span everything from routine questions about the civil-service laws all the way to weighty matters, such as the President’s powers under the Constitution.

Unlike ordinary courts, however, OLC opinions cannot be appealed to the Supreme Court. Indeed, the vast majority of issues covered by the OLC opinions are, for a variety of procedural reasons, unlikely to go before any independent court. This is partly because the OLC often deals with legal issues that would be booted out of court on “political question” grounds. But it is also because the OLC’s most important opinions, particularly in the areas of “national security” and “war powers,” are classified. That means that neither the public nor most members of Congress, if any, even know what the OLC and the President believe the law is. If the OLC issues an opinion giving the President the power to ignore a Congressional law – as it has done – the OLC has the final word on the matter. The President and his staff can ignore the law and it is left to Congress to find a way to stop him. And since it is likely to be in secret, most members of Congress, again, if any, and the public are unlikely to ever find out.

One of the issues that came before Barron while he was at the OLC was the use of drones to kill Americans. Barron is reputed to have co-authored a highly controversial and still-secret opinion that gave President Obama the legal authority to kill American citizens anywhere in the world. The White House first denied this but then killed a Muslim cleric from New Mexico, Anwar Al-Aulaqi, with a drone in Yemen. Two weeks later, they killed his teenage son with a drone as well. These targeted killings  famously led Senator Rand Paul to mount his filibuster of John Brennan’s nomination to head the CIA. In fact, these targeted killings were  reminiscent of the notorious Phoenix assassination program of the Vietnam War, except now targeting U.S. citizens.

The White House stonewalled efforts by members of Congress to release Barron’s opinion authorizing this policy but on Tuesday night, less than 24 hours before the Senate vote to move Barron's nomination ahead, they agreed to do just that. But that doesn't mean Senators, with the exception of a select few, or average Americans will see the opinion soon; the process of releasing the documents will take some time, as redactions are made and a court reviews any changes, long after his appointment has been irrevocably confirmed.

Previously, its content was selectively leaked however, first, to Charlie Savage, a New York Times reporter, and later in a sixteen-page  “white paper” summarizing the opinion last February. While these were just dribs and drabs, these leaks have suggested that Barron's opinion was alarmingly results-oriented in putting a legal polish on President Obama’s policy of summarily executing people around the world. Based on these leaks, it appears that these opinions allow even the most speculative suspicions of a threat as sufficient to shoot first.

We have been down this road before. While most lawyers in the OLC are not household names, John Yoo is a likely exception. He was the primary author of the infamous torture memos, which authorized the “enhanced interrogation” of citizens and aliens alike after 9/11. He also co-wrote OLC opinions authorizing the President to detain citizens without trial and to create the military commissions in Guantanamo that the Supreme Court struck down in Hamdan v. Rumsfeld.

Once released, these opinions ignited a firestorm of criticism. The opinions were so one-sided and outcome-oriented that the Department of Justice’s own legal ethics body chastised Yoo for writing them. In fact, even before these opinions were leaked to the public, President Bush’s appointed successor in the OLC secretly overturned them.

While John Yoo has taken most of the heat, people forget that these highly controversial opinions were signed by Jay Bybee. Bybee was Yoo's co-author and before the torture memos were ever released to the public, indeed before the scope of the government’s torture program even came to light, President Bush appointed Bybee to a life-time job on the prestigious and influential Ninth Circuit Court of Appeals.

Before history repeats itself and before Barron likewise receives a lifetime appointment that may very well lead him to the Supreme Court one day, the Senate should reconsider whether he has the independence of character to tell the government “no” when it matters or if he is all too willing to distort the law to give the White House the answers it wants. The Senate should insist that Barron’s OLC opinions, particularly those authorizing procedures that have made Americans around the world vulnerable to being executed without trial, are released before the Senate takes a final vote on his nomination.