The right's sexual delusion: Inside the brain of a very confused thinker

Are you, too, distressed by the heartless oppression of rapists and coddling of victims? Help is finally here! 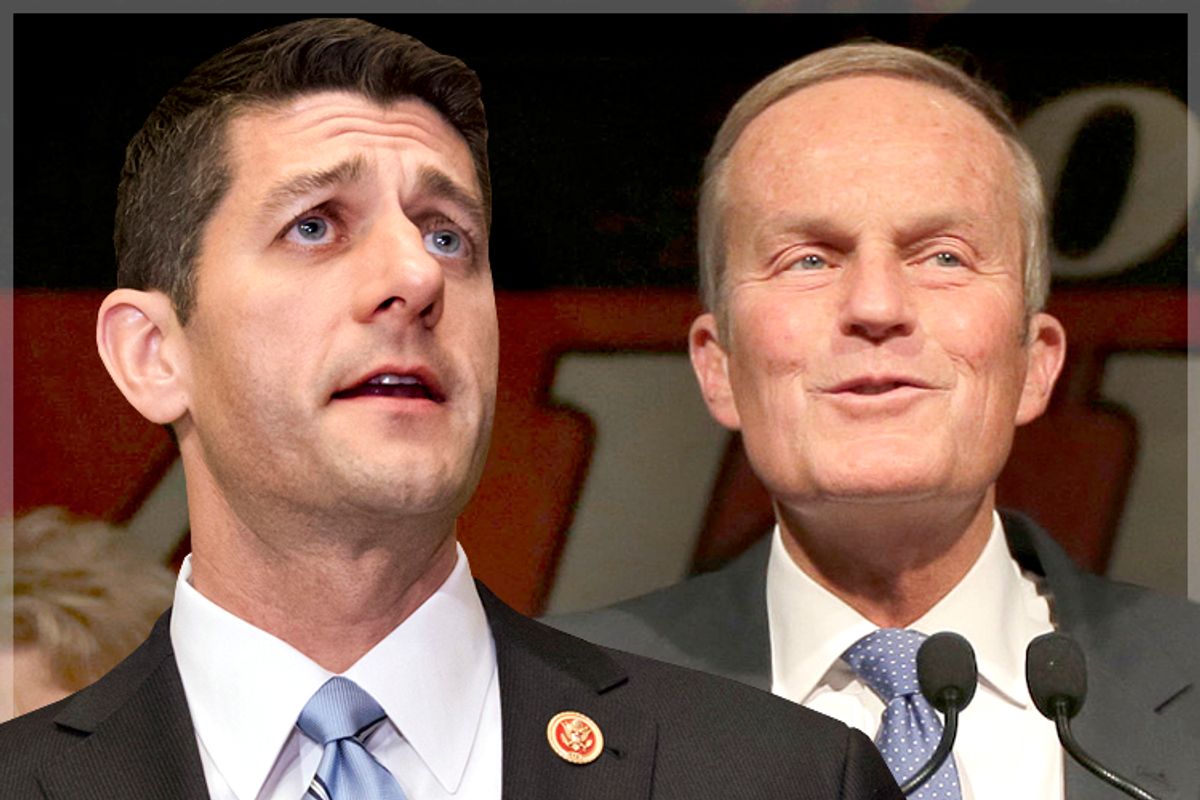 Conservative writer and commentator A.J. Delgado wants everyone to just chill out and stop talking about rape so much. She would also like women to stop being so uptight about who can and cannot touch their butts. Because sometimes in life you just get your butt touched. And what is so wrong with having your butt touched? Conservative writer and commentator A.J. Delgado would like to know.

"Rape. Decades ago, women who were raped and reported it [...] were often disbelieved and shamed. That is tragic," begins Delgado's piece for the National Review Online. "But how far the pendulum has swung in the other direction! Now, the term 'rape' or 'sexual assault' is thrown around almost effortlessly, accusations easily made and lives easily ruined."

She is so right! Back in the day, rape meant the sexual violation of an unmarried white virgin. Things were simpler then! And back in the day, it was hard for women -- the few who came forward at all -- to get people to believe them when they said they were raped. Here's historian Estelle Freedman writing about the criminal prosecution of rape during the 19th century:

Evidence of physical injuries to prove resistance and corroborative testimony that a woman had cried out would improve her believability in court. But all-male juries and members of the judiciary often assumed that once a woman had consented to sex, any subsequent sexual activity was consensual.

Now things keep changing -- fast. The pendulum really has swung in the other direction in a major way! I mean, here's Georgia Appeals Court Judge Christopher McFadden -- in March of 2014 -- explaining that he overturned the guilty verdict in a rape case because the rape just wasn't forcible enough:

At no time prior to her outcry did [the victim] behave like a victim. Nor did [the perpetrator] behave like someone who had recently perpetrated a series of violent crimes against her. [...] It requires more than that bald argument to satisfy this court that it should ignore the fact that, until the outcry, neither of them showed any fear, guilt or inclination to retreat to a place of safety.

And here's a photo of the people called to testify during the first day of a Senate Armed Services committee hearing on sexual assault in the military (there was one woman present on the almost all-male panel of 12): As a result of this dangerously fast-swinging pendulum that has so drastically altered the landscape of justice for rape survivors over the last two centuries, we are currently living in a country where 3 percent of rapists will spend time in jail as a result of their crimes! I mean, can you believe that? Is it just me or does that feel like a lot? Like, imagine you took a test and got a grade of 3 percent. You would probably be like, "That's a really good and satisfying grade!" Conservative writer and commentator A.J. Delgado knows what I mean.

And whom do we have to blame for this shocking shift from barely acknowledging or prosecuting rape to ... barely acknowledging or prosecuting rape? Feminists! Feminists who want us to believe people when they say they have been raped! "First, the pendulum shift began with feminists pushing the notion that women claiming they were raped should always be believed and never questioned," notes Delgado. "Then followed the loosened standards for arrests in rape accusations. Sure, district attorneys still require evidence of a rape to prosecute, but police are not restricted by such to make a mere arrest (so, smile for your life-ruining mug shot!)."

Sure, district attorneys still require evidence of a rape to prosecute (which will only happen to 8 percent of rapists), but police are actually allowed to arrest people who are accused of sexual assault (which will only happen to 10 percent of rapists). I mean what kind of country are we living in that such a narrow sliver of the people who commit sexual assault will actually be held nominally accountable for their crimes? A country overrun by terrible feminists and liberals, according to conservative writer and commentator A.J. Delgado.

Even though only around 40 percent of sexual assaults are ever reported in the first place, and even though -- as previously noted -- only 3 percent of rapists will spend a day in prison, the real crisis we are faced with at this moment -- as Delgado so rightly points out -- is the shaming of men who like to touch butts. (And it's not just the men who like to touch butts who are having their rights trampled; Daily Caller garbage brain Patrick Howley recently pointed out that the rights of men who love to stare at tits are similarly under attack.)

"Keep in mind: Men can now be shamed with the 'sexual assault' offender label for minor acts," Delgado warns. "If a friend jokingly comes up behind a girl and slaps her butt, that is, by today’s definitions, a sexual assault." This is so true. And yet here we are, talking about "epidemic" levels of sexual assault, rather than talking about the epidemic levels of friends calling the police on friends who jokingly touch their butts!

Conservative writer and commentator A.J. Delgado also has some theories about why we're talking about rape so much lately. (And it's not because more people are talking openly about their experiences of sexual assault, or because survivors are holding institutions accountable for failing them. That would be a sensible thought and who needs a sensible thought when you're having such a fun time discrediting the experiences of rape survivors?)

"Are college administrators, now largely in charge of presiding over rape allegations, quick to pronounce a situation as a rape, erring on the side of caution and of extreme feminism?" asks Delgado. "Are women themselves being taught to believe they were raped [...]?"

Delgado answers both of these questions in the affirmative, naturally. And she has the data to back it up. I mean, you know that college administrators are "quick to pronounce a situation rape" in the service of "extreme feminism" when 55 colleges and universities are currently under federal investigation for systematically failing to report or properly address sexual assaults. Or when a rapist can successfully appeal a school board conviction by arguing that the level of consent required to have sex with someone was "too high" -- even though his victim repeatedly said "no" during the assault.

And you also know that women are being taught to falsely believe they were raped when actual research shows that many women and girls normalize sexual violence as a coping strategy to avoid reporting it. These are just obvious points that should be obvious to anyone, really. I mean, Delgado has an airtight argument. Very solid stuff happening inside the brain of conservative writer and commentator A.J. Delgado.

But she's not done with her questions! There are more questions:

If rape is a hideous, heinous crime — and it is — is it not similarly horrific to brand someone guilty of such without slow and somber consideration of circumstances and evidence? Is it not also horrible when we rush to believe an accuser, with no thought for the accused? Is it not also horrible when we brainwash women into believing they were raped? Is it not heinous to shift the pendulum from attacking the accuser to attacking the accused? Is it not counterproductive to lump victims of violent rape in with victims of "sexual assault"?

A few thoughts by way of conclusion, which I hope will help conservative commentator and writer A.J. Delgado in her quest to honor the horrors of rape by pretending that it doesn't exist:

1. Most rapists -- after facing a judge who slowly and somberly considers the circumstances and evidence -- will not go to prison for raping someone. Even though they raped someone! Some of these rapists will then go and rape someone else.

2. When we "rush" to believe an accuser -- something that we actually do not do as a culture -- we are guided by the fact that one in six women will be the victims of an attempted or completed sexual assault in their lifetimes. Whereas data on false rape reporting has no neatly comparable data point. Drawing false equivalences between the incidence of sexual assault and the incident of false reporting is a joke. It makes you a joke.

3. Far from "attacking" the accused, we tend to give them nice things like multiple Oscars and Heisman Trophies.

4. It is not counterproductive to "lump" victims of "violent rape" with victims of sexual assault (which is also a form of violence, but, sure, let's use your terms) because both are acts of unwanted sexual contact. Terrible goons like Paul Ryan and Todd Akin -- who use language like "forcible rape" and "legitimate rape" for cynical political purposes -- may think you have a point, conservative writer and commentator A.J. Delgado, but thinking (or moderately empathetic) types know that you are a clown person making a clown argument. But it's a clown argument that some people seem to take seriously, so maybe knock it off.