"When you hear ... that somehow, well, Congress is just broken, it’s not true," the president said on Thursday 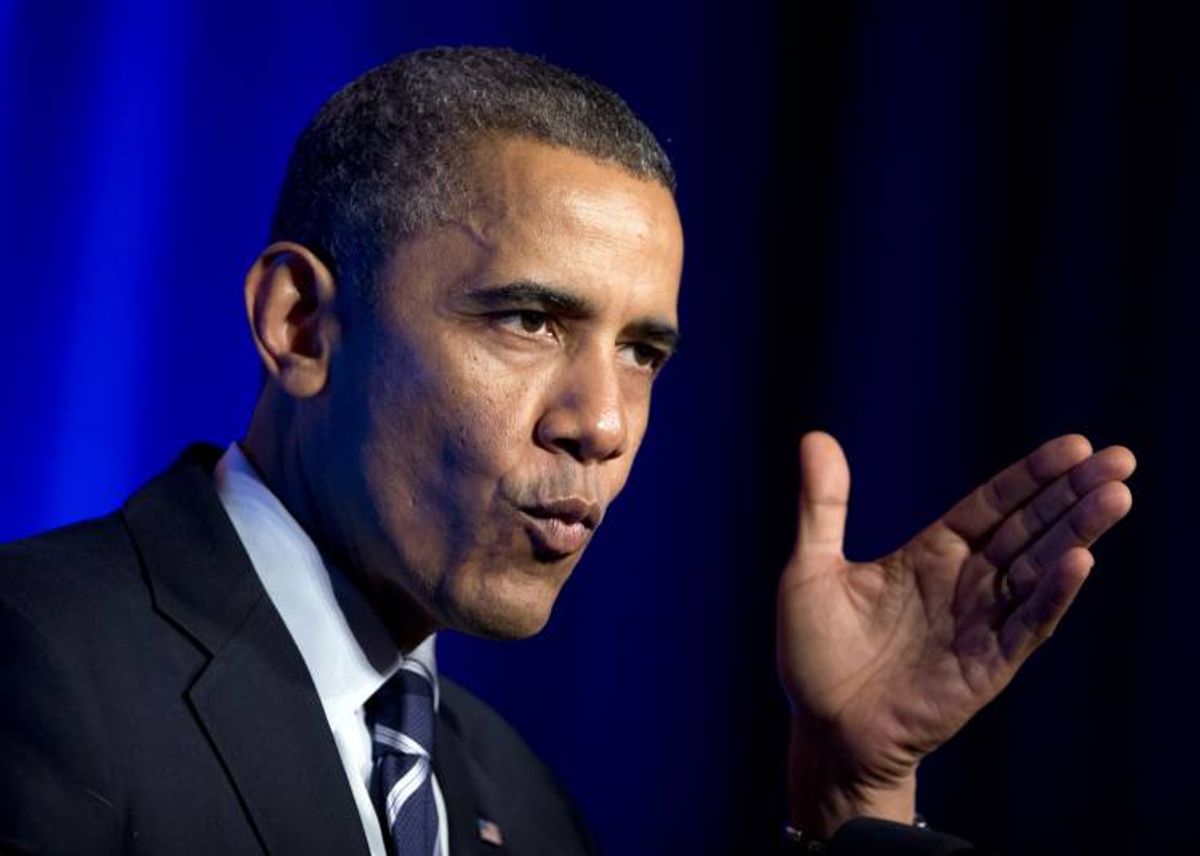 Speaking at a fundraiser on Thursday night, President Obama argued that the way the mainstream political press covers D.C. is misleading because it presents Congressional gridlock as if it were the product of intransigence from Democrats and Republicans. The truth, Obama claimed, was that it's overwhelmingly the GOP that is to blame for Washington's current dysfunction.

While this isn't the first time Obama has critiqued the press, he has not done so previously with this much specificity and forthrightness. In his remarks, the president noted that on issues ranging from climate change to health care to immigration reform, Democrats have been willing to accept half or less of what they'd want in an ideal world for the sake of getting something done. Republicans, however, are not burdened with the same sense of urgency.

You’ll hear if you watch the nightly news or you read the newspapers that, well, there’s gridlock, Congress is broken, approval ratings for Congress are terrible.  And there’s a tendency to say, a plague on both your houses.  But the truth of the matter is that the problem in Congress is very specific.  We have a group of folks in the Republican Party who have taken over who are so ideologically rigid, who are so committed to an economic theory that says if folks at the top do very well then everybody else is somehow going to do well; who deny the science of climate change; who don’t think making investments in early childhood education makes sense; who have repeatedly blocked raising a minimum wage so if you work full-time in this country you’re not living in poverty; who scoff at the notion that we might have a problem with women not getting paid for doing the same work that men are doing.

They, so far, at least, have refused to budge on bipartisan legislation to fix our immigration system, despite the fact that every economist who’s looked at it says it’s going to improve our economy, cut our deficits, help spawn entrepreneurship, and alleviate great pain from millions of families all across the country.

“So the problem…is not that the Democrats are overly ideological — because the truth of the matter is, is that the Democrats in Congress have consistently been willing to compromise and reach out to the other side.  There are no radical proposals coming out from the left.  When we talk about climate change, we talk about how do we incentivize through the market greater investment in clean energy.  When we talk about immigration reform there’s no wild-eyed romanticism.  We say we’re going to be tough on the borders, but let’s also make sure that the system works to allow families to stay together…

When we talk about taxes we don’t say we’re going to have rates in the 70 percent or 90 percent when it comes to income like existed here 50, 60 years ago.  We say let’s just make sure that those of us who have been incredibly blessed by this country are giving back to kids so that they’re getting a good start in life, so that they get early childhood education…Health care — we didn’t suddenly impose some wild, crazy system.  All we said was let’s make sure everybody has insurance. And this made the other side go nuts — the simple idea that in the wealthiest nation on Earth, nobody should go bankrupt because somebody in their family gets sick, working within a private system.

So when you hear a false equivalence that somehow, well, Congress is just broken, it’s not true.  What’s broken right now is a Republican Party that repeatedly says no to proven, time-tested strategies to grow the economy, create more jobs, ensure fairness, open up opportunity to all people.