In his New York Times attack, the former "Crossfire" star reveals some of the elite media's deepest insecurities 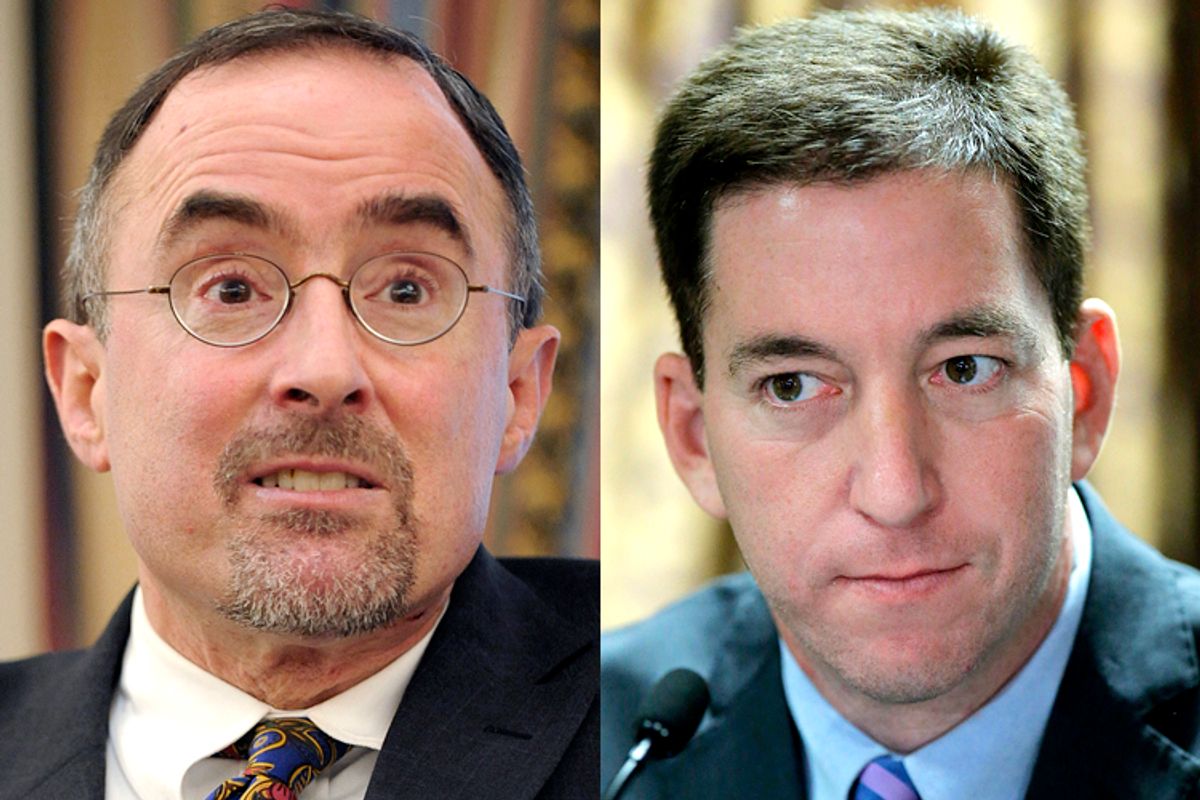 People tell me — they insist, in fact — that there was a time, long ago, when Michael Kinsley wrote good columns and had interesting things to say. Considering that the man’s undeniably long list of achievements includes helping provide the grist from which the “even the liberal New Republic” and “#Slatepitch” memes were born, and that his other signature accomplishment is helping turn “Crossfire” into an immortal American institution, I’ll cop to skepticism. Yet even if we grant that, once upon a time, Kinsley could do better than argue Obama should fold on the debt ceiling for reasons unclear, the fact remains that he is, now, wielding his decades of experience and influence in service of some very reactionary and noxious views.

I’m thinking in particular of Kinsley’s latest chin-stroker, a review in the New York Times of “No Place to Hide,” the new book by Salon alum Glenn Greenwald about his adventures with National Security Agency leaker/whistle-blower Edward Snowden. Kinsley quite clearly doesn’t like Greenwald, whom he describes as an “unpleasant” and “self-righteous sourpuss”; but more than with the man himself, Kinsley’s problem is with Greenwald’s worldview. By championing the idea that journalists should have the right to expose government secrets without fear of legal retribution, Greenwald, according to Kinsley, has gone too far. “I can’t see how we can have a policy that authorizes newspapers and reporters to chase down and publish any national security leaks they can find,” he writes, all but negating the possibility of government-focused investigative journalism that is also legal.

It’s possible that Greenwald and Kinsley disagree with each other on this point due to divergent abstract principles. But I don’t think that’s what’s going on here. Instead, the best way to understand the split between Kinsley and Greenwald — who both, on this issue, have many followers — is to appreciate their different estimations of the state of American democracy’s major institutions. For Kinsley and his ilk, American democracy is deeply flawed, but essentially legitimate and real. The most obvious example of the disconnect is when Kinsley writes, with a tinge of snippiness, that “pace Greenwald, we still are [a democracy].” Believing as he does that we are still more or less what we tell ourselves, Kinsley has little patience for someone like Greenwald who is more interested in tearing one of our major institutions (the national security state) down.

To his credit, Kinsley seems to grok this, although he doesn’t address it head-on. Greenwald, according to Kinsley, fancies himself as “not a reformer but a ruthless revolutionary — Robespierre, or Trotsky.” Earlier in the review, Kinsley implies that the two men have never met (“Maybe [Greenwald’s] charming and generous in real life,” he writes before calling him names) so it’s not clear to me how Kinsley is able to suss Greenwald’s self-perception. But nevertheless, the description is telling, if more for what it says about Kinsley than Greenwald. “The ancien régime is corrupt through and through,” Kinsley writes, still supposedly channeling Greenwald, “and he is the man who will topple it.” In Kinsley’s world, keep in mind, being like a French Revolutionary is a bad thing.

Kinsley, however, is hardly the only one to criticize Greenwald for his lack of faith in what I’ll call, for lack of a better word, the system. In another negative review, this one running in the British magazine Prospect, the New Yorker’s George Packer also takes swipes at Greenwald and Snowden, and also focuses his ire on their embrace of revolution instead of reform. Greenwald, according to Packer, “doesn’t believe in reform” while Snowden fails to understand that there is “no such thing as an entirely free individual” and that despite the liberatory promise of the Internet, “[n]o one lives outside the fact of coercion.” Rather than make peace with the immutable reality of authority, Greenwald and Snowden push for radical change and, Packer writes, “only make institutional authority stronger” in the process. How this dynamic works, Packer does not say.

Yet while Kinsley and, to a lesser extent, Packer bury the lede when it comes to their criticisms of Greenwald — mocking him for his hyperbolic claims of American tyranny and needling him for his rejection of the orthodoxy of “objective” journalism when, in truth, their critique is much more philosophical — the man himself is far more forthright about what the debate is really about. “Kinsley has actually done the book a great favor by providing a vivid example of so many of its central claims,” Greenwald writes in his response to the Times review. Kinsley's piece, Greenwald claims, is evidence of how members of the media elite “reflexively demonize the personality of anyone who brings unwanted disclosure” and “attack anyone who voices any fundamental critiques of American political culture.” Referencing the now-infamous remarks Larry Summers reportedly made to Elizabeth Warren, Greenwald writes that his treatment at the hands of Kinsley and Packer is “simply a ritual of expulsion” from the American elite (which, he notes, comes to him as “a relief”).

To some degree, we shouldn’t be surprised to find that Kinsley, Packer and their supporters are less forthright than Greenwald, Snowden and theirs when it comes to acknowledging what, exactly, is being debated. With the exception of NBC’s David Gregory — who is far more salesman or game show host than journalist — few people in the media are comfortable defending the practices of the NSA. Indeed, both Kinsley and Packer at least give lip service to the idea that what Greenwald and Snowden have revealed is valuable and troubling. But in their predictable desire to distance themselves from the kind of fundamental and, yes, radical attack put forward by the NSA leakers, Kinsley and Packer are defending the national security state as flawed rather than corrupt, in need of reform rather than reconstruction. And if you think that sounds crazy, maybe you’re another Robespierre or Trotsky, too.