Why 2000s R&B was the greatest music ever

From Destiny's Child to Cassie to Mariah Carey, proof that nothing is better than R&B from the '00s 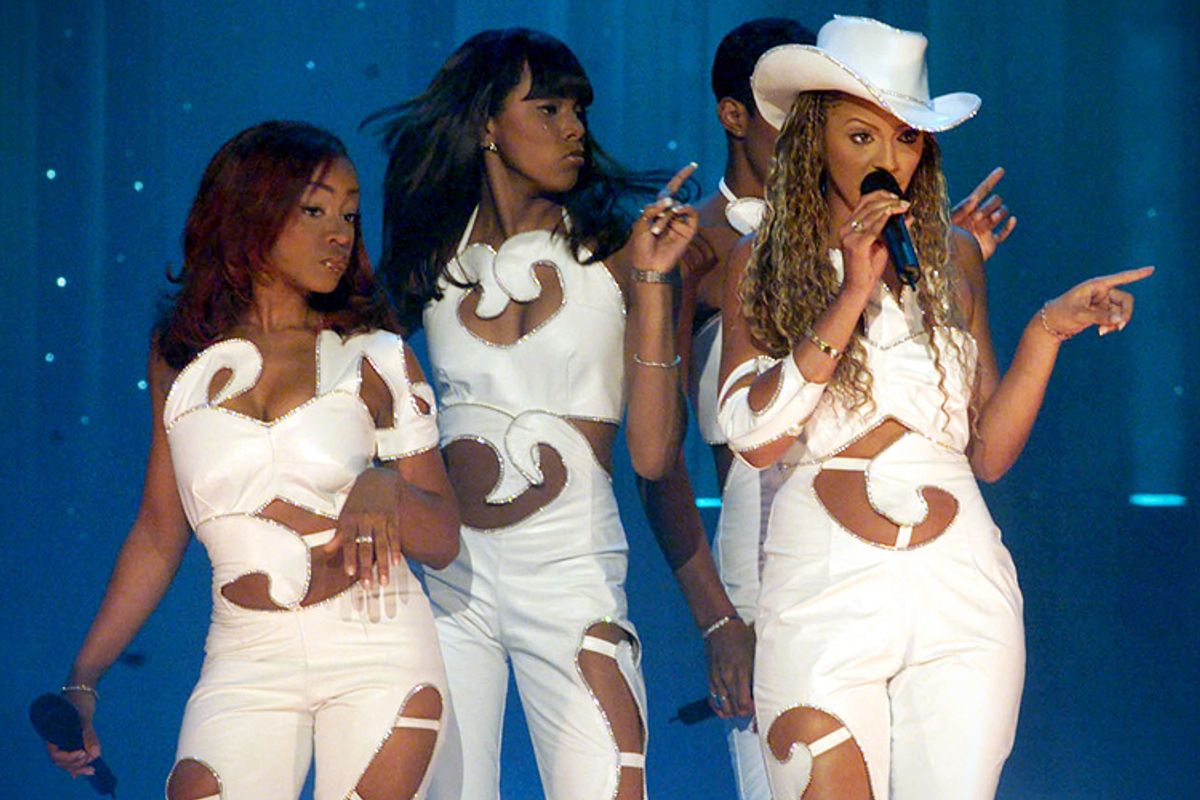 There's not a ton of nostalgia for 2000s pop R&B. What critical enthusiasm the music generated tended to come from rank poptimists, who are now on to the next new sound. Meanwhile, the backward-looking rockists haven't identified much for the ages in the welter of retro-disco, one-hit-wonder, Beyoncé-wannabes who wailed hopefully amid gloppy washes of overproduction.

All of which is a shame, because the R&B of the 2000s was a bizarre and wonderful thing, as ’90s slow jams gave way to a bracingly slick stew of disco, funk, hip hop, and even some alternative and electronica snuck in there amidst the lacquered finish. Here's some of the best tracks of an undervalued era and genre.

Destiny's Child's 2001 album "Survivor" was a big step down from "The Writing's On the Wall," but it did have this marvelous ode to checking out guys. Beyoncé and co-producer Rob Fusari find the common ground between Beach Boys' burping rhythmic vocals and Timbaland's burping rhythmic soundscape.  Good to the last dollop of "wah woh."

Kelly Rowland, "Still In Love With My Ex"

Kelly Rowland's post-Destiny's Child career hasn't been meteorically successful, but she's made some good music. This is probably my favorite of her songs, a lazy mid-tempo Soulshock and Karlin production, with Rowland projecting a vulnerability that Destiny's Child, and Beyoncé, rarely reached for. The repetitive "ex" in the background has a hopeless, inescapable quality to it, and that line about how she loves his family, too, always gets me.

Canadian singer songwriter Nelly Furtado sold all the way out on her 2006 album "Loose," collaborating with Timbaland, sexing up, and making a (startlingly successful) bid for chart success. "Promiscuous" has the deliberately clumsy lasciviousness of a Loretta Lynn/Conway Twitty duet, with Furtado announcing, "chivalry is dead/but you're still kind of cute," while Timbaland volleys back with endearingly klutzy Biz Markie singing:  "I want you on my team" ("so does everybody else!")  Meanwhile the quasi-Bollywood beats slink and slither along, a sneakily sensual background for all the cheerful cheese. Eroticism doesn't get much more charming.

Toya, "No Matta What (Party All Night)"

Toya put out one amazing self-titled album in 2001 and then disappeared. "No Matta What" in particular is a stunning track, built around a glitchy, skipping beat that suggests Aphex Twin and layers of production that include (presumably synthesized) strings and classic rock guitar. Over it all, Toya and the multi-tracked chorus soar ecstatically, partying (as the video suggests) like it's way past 1999.

One of many girl groups that tried to imitate Destiny's Child's success, Isyss was distinguished by lead singers Quierra Davis-Martin's nicely nasal burr and an unusually ardent embrace of retro-disco. "Uh Uh Uh Uh" struts like no one told them the Bee Gees were out of style. Sadly, but inevitably, that obliviousness did not ensure them a long career; 2002's "The Way We Do" was their only release.

Shareefa tried to walk the line between Mary J. Blige neo-soul and the new 2000s pop. She had her greatest success on "Need a Boss," where her vocals got run through Darkchild's echoey production, complete with bonus stuttering effects and Ludacris doing his thing with "more verses than the Bible." The lyric inveighing against "fake thugs" is nicely nonsensical; this isn't keeping it real by a long shot. But the ersatz sturm-und-drung keeps things from turning into neo-soul default emoting slog, and Shareefa has enough authority to make the result sound playfully-rather-than-haplessly-trying-to-be tough. "How Good Love Feels," also from her 2006 album "Point of No Return," is highly recommended as well.

Tweet negotiated a compromise between neo-soul and pop in a somewhat different way than Shareefa. Rather than combining the two, she had a couple of Timbaland- and Missy Eliot-produced uptempo tracks for hits, and then devoted the bulk of her album to more sophisticated soul. "I Bet You Always Will" is a good example, her smoky vocals sliding over and drawing out the lyrics a la Sam Cooke or Al Green. You can still tell that it's the 2000s though; the producers multi-track her, sometimes throwing in a single echo, sometimes a choral backdrop, her own voice whispering encouragement as she tells her man he'll always be in love with all of her.

Olivia, "'Til He Comes Home"

An aching girl-group-esque ode to a man behind bars, this nicely captures the way R&B in the 2000s managed to both go pop and go hip hop. Everybody praises "Orange Is the New Black," but Olivia's mix of defiance, fear and wistful hope seems like a more heartfelt representation of women in occupied communities, and with a better beat.

Mariah Carey, "One and Only"

A number of '90s artists were reinvigorated by the new millennium. Brandy's collaboration with Timbaland on the wonderful "Afrodisiac" is probably the best example, but Mariah Carey's "Emancipation of Mimi" fits as well.  "One and Only"'s melody harks back to "Butterfly," but slotted into a tighter song structure, turning insistent beats, Twista's rap and her whistle notes, into one big, slick, romantic delivery system.

Amerie's albums are always spotty, largely because she insists on recording ballads even though she doesn't seem to have any particular idea what to do with them. There aren't many performers from the 2000s, or from whenever, who can compete with her when it comes to fierce funk, though. She's best known for the glorious assault that is the Rich Harrison-produced "1 Thing." But she's got a number of such gems tucked away in her catalog, including this track from her largely ignored 2009 album "In Love and War." That bass line would make Sly Stone nod his cowboy hat in approval, and Amerie's vocals are so driving they knock the track all the way around R&B and into rock.  Of all the folks on this list, she's probably the one I wish would record again; it seems like she must have at least one perfect album in her. We'll probably never find out though; her career seems dead, alas.

Cassie, "Not With You"

Along with Timbaland, Cassie is the R&B performer from the 2000s who really seems like she might be readopted as a model for the future.  Her self-titled 2006 record, with its knowingly fey vocals and Ryan Leslie's even feyer sparse electro production,  has been an inspiration for a number of left-field R&B artists. Cassie significantly appears alongside folks like Kelela, Solange and Jhene Aiko on last year's "Saint Heron" comp, and she seems to hover over the work of Marian Hill as well. She hasn't been able to get out a sophomore effort (though last years thugged-out "RockaByeBaby" mix tape was amazing), but she may yet be the future.