Low self-esteem is good for you! We've been too successful at making people feel good

The self-esteem movement has worked: We like ourselves more than ever. But new studies suggest that's a bad idea 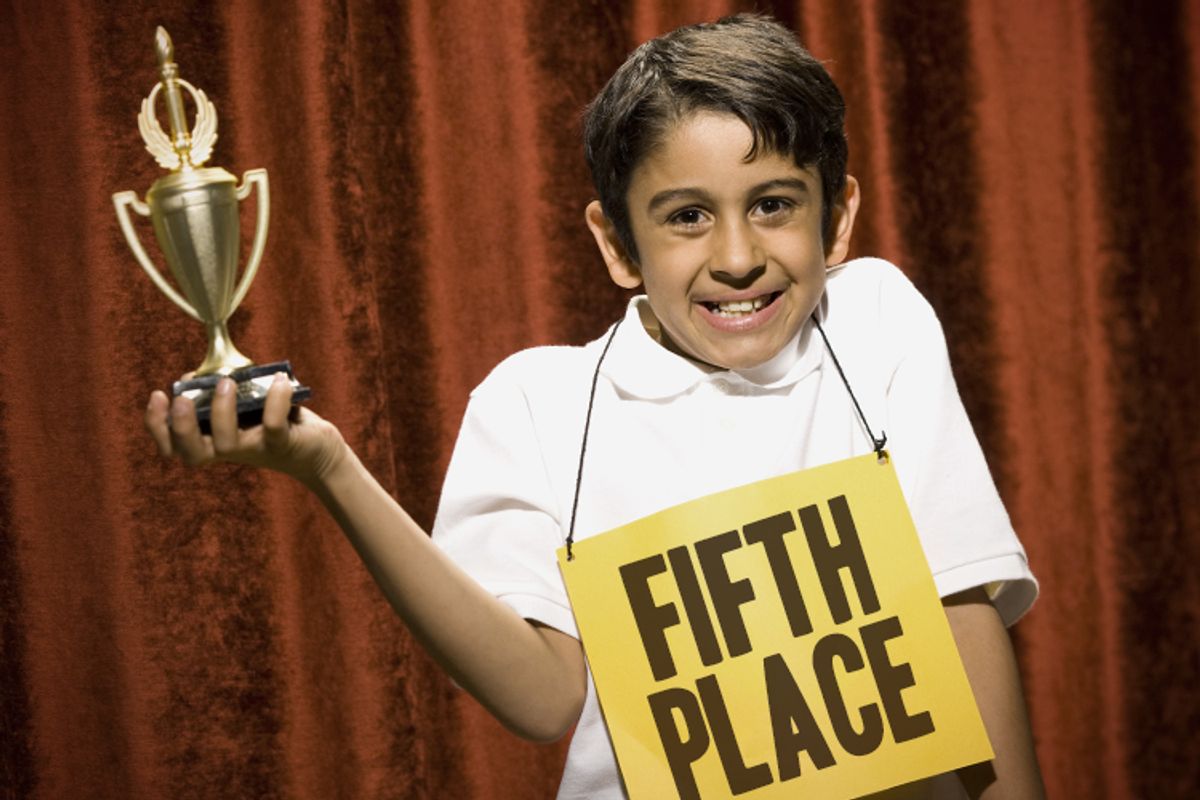 Adapted from "Unworthy: How to Stop Hating Yourself" by Anneli Rufus

"The whole problem with the world is that fools and fanatics are always so certain of themselves, and wiser people so full of doubts." -- Bertrand Russell

Is low self-esteem all that bad? Self-loathing is. But between self-loathing and narcissism is a vast spectrum comprising infinitely various degrees of self-regard. Neither extreme is good. If only we could just reach medium.

In 1986, California state assembly member John Vasconcellos proposed the State Task Force to Promote Self-Esteem. This ignited a new movement: Based on the notion that low self-esteem caused every kind of social woe from teenage pregnancy to low test scores and high dropout rates, school curricula and parenting techniques were radically transformed, their main objective now being to cultivate high self-esteem among the young, which activists proclaimed would cure those social woes and make America a safer, happier, and better place. A multibillion-dollar industry surged around self-esteem. Kids were taught to make "me" flags of their putative "me" nations, to view history and fiction through the filter of their feelings, and to start schooldays with affirmations such as I always make good choices and Everyone is happy to see me.

The aftermath has not worked out as planned. Since 1986, self-esteem among young people has increased. Studies show that students hold themselves in higher regard than students in decades past. But to the shock and horror of the self-esteem movement's boosters, soaring self-esteem has done nothing to stem crime, addiction and those other ills the boosters claimed high self-esteem would stem. In fact, ambient sky-high self-esteem might present new problems of its own: One long-term study found that college students are now twice as narcissistic as college students were in 1982; other studies link high self-esteem with high rates of aggression, territorialism, elitism, racism, and other negative qualities.

And other studies show that the so-called Millennial Generation – young adults born after the self-esteem movement began -- are demonstrably less likely than Baby Boomers and Generation Xers to care about social problems, current events or energy conservation. Millennials are also less likely to have jobs whose main purpose is to help other people. In one study, three times as many Millennials as Boomers said they made no personal effort to help the environment.

"Certain forms of high self-esteem seem to increase one's proneness to violence," reads one report published in the journal of the American Psychological Association. "An uncritical endorsement of the cultural value of high self-esteem may therefore be counterproductive and even dangerous. The societal pursuit of high self-esteem for everyone may literally end up doing considerable harm."

Noting that there are "almost no findings showing that [high] self-esteem causes anything [beneficial] at all," University of Pennsylvania psychology professor Martin Seligman laments:

"Something striking has happened to the self-esteem of American children during the era of raising our children to feel good. They have never been more depressed."

This is no doubt partly because, raised to believe that they are special and perfect and entitled to all good things, they face terrible comedowns in the real world.

If (as often happens nowadays) every student in a class gets an A grade or every player in a tournament gets a trophy not because they all deserved these things, but rather in order to boost their self-esteem, then A becomes commonplace and meaningless, an average grade of no particular pride-inducing significance, just as C was a few decades ago. And the notion of "victory" is blurred. If everyone is special, then no one is special. Q.E.D.

Such revelations might shock the self-esteem boosters, who envisioned high self-esteem as an all-powerful magic potion, but will probably not shock us. Researchers have found that high self-esteem does not guarantee happiness and is often linked with depression because those whose self-esteem is elevated on false or flimsy pretexts – e.g., being told that everyone adores you or being told you're perfect just for existing – are highly susceptible to all perceived slights. So-called beneficiaries of the self-esteem boom have been brainwashed to believe they deserve the best grades, the best treatment, the best of everything. Thus they are very easily offended, angered, disappointed, and crushed by even the faintest criticism. Psychologists call that kind of sky-high but baseless self-esteem "fragile self-esteem." Its healthy opposite is achievement-based "secure self-esteem" – otherwise known as earned self-respect – which is not necessarily sky-high, but less likely to leave its possessors sulking and raging when the real world delivers its usual harsh doses of reality.

People with high self-esteem often seem like aliens to us, and icky aliens at that. We blame ourselves for everything. They take no blame. We're always sorry. They never are. We fear punishment. They don't. Often, they do the punishing. Our flaws obsess us. They think they have none.

"One has only to go into a prison," writes former jail doctor Theodore Dalrymple, "to see the most revoltingly high self-esteem among a group of people (the young thugs) who had brought nothing but misery to those around them, largely because they conceived of themselves as so important that they could do no wrong. For them, their whim was law, which was precisely as it should be considering who they were in their own estimate."

But see, we could have told you that.

A comprehensive review of self-esteem research published in the journal of the Association for Psychological Science in 2003 is titled "Does High Self-Esteem Cause Better Performance, Interpersonal Success, Happiness, or Healthier Lifestyles?"

According to its authors, a team of professors from major universities, the answer is no, no, no, and no.

"Our findings do not support continued widespread efforts to boost self-esteem in the hope that it will by itself foster improved outcomes," the authors warn. In fact, "indiscriminate praise might just as easily promote narcissism, with its less desirable consequences."

They recommend instead that high self-esteem be promoted not as a basic birthright but rather as a goal attained through achievements and ethical behavior. (Hey, why did no one ever think of this before? Oh wait, they did. It was how every culture on Earth functioned until a few years ago.) In other words, feeling good should stem from doing good.

Self-loathing and narcissism are both unhealthy because both are forms of self-absorption, albeit at opposite extremes. Whether we are always sorry or never sorry, it is all about us.

Most spiritual paths advocate a conscientious middle ground. According to these doctrines, good people just do good, which generally entails neither playing dead nor playing God.

According to the Tao Te Ching, a sage "does not consider himself right, and thus is illustrious. He does not brag, and thus has merit. ... The sage knows himself but does not display himself."

"Nothing in the world is as soft and gentle as water. Yet it has great strength. It flows downhill and can easily wear away the hardest stone. The soft and gentle can conquer the hard and firm."

In Christian tradition, pride is not just one of the Seven Deadly Sins, but is considered the worst sin of all, a mortal sin, and the cause of all others. The original term for this sin was not "pride" but the Greek word hubris, which some scholars say should be more accurately translated as "unmerited high self-esteem." For two thousand years in the Western world, high self-esteem or pride was considered a moral failing – yet now children are brought up believing that it's the highest virtue.

Spiritual texts laud the modest and the humble. "The palace pillar is wide, but the human heart should be modest," reads a Shinto poem. "The inhabitants of Paradise will be all the humble and the weak," reads Islam's Hadith of Bukhari. "Be humble; be harmless; have no pretension," urges the Hindu Bhagavad-Gita.

Modesty is not shame but decorum. Humility is not self-abasement but respect.

"Beware of practicing your righteousness before other people in order to be seen by them, for then you will have no reward from your Father," warns the New Testament's Book of Matthew. "When pride comes, then comes disgrace, but with humility is wisdom," notes the Book of Proverbs. Saint Augustine observed: “There can only be two basic loves: The love of God unto the forgetfulness of self, or the love of self unto the forgetfulness and denial of God.”

Through a practice known as bodhicitta, devout Buddhists pledge to spread compassion through the world, aiming to end the suffering of "all sentient beings." The funny thing that happens in the midst of all this liberating, shimmering compassion is that somewhere down the road, you realize that all sentient beings include you.

We who hate ourselves are not saints. And yet self-loathing – in spite of itself – has given us gifts that we get to keep.