Chlorine in your chicken: Why poultry is more dangerous than ever

New changes from the USDA mean line speeds at poultry factories are on the rise. Happy barbecuing this summer 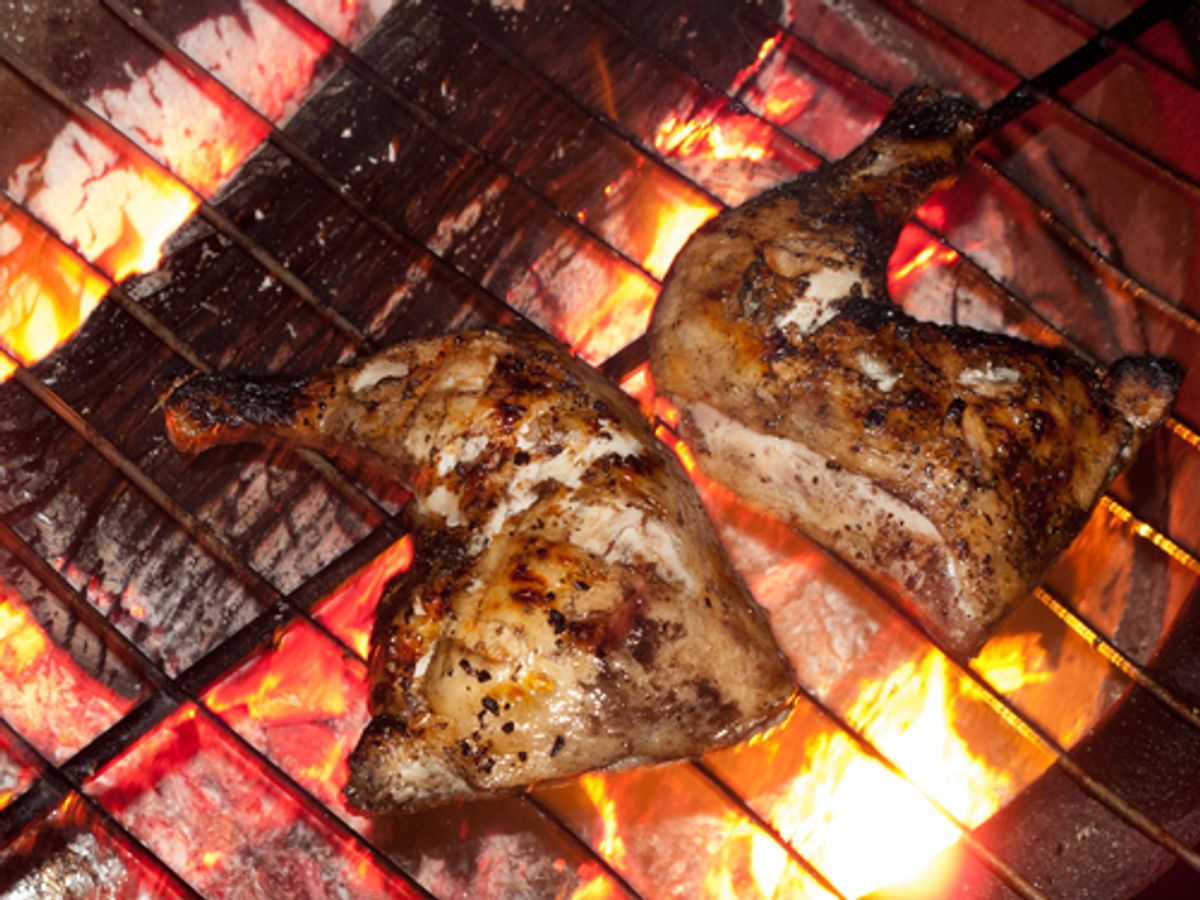 Back when Gwen Clements worked at the Perdue chicken plant in Beaver Dam, Kentucky, she stood beside a conveyor belt blanketed in chicken parts for eight hours each day. Usually she packed drumsticks, but whichever part of the bird she happened to be packing on a given shift, the smell was as constant as it was noxious: a combination of raw poultry and chlorine, the latter emanating from the pathogen-killing chemical bath that the carcasses—often contaminated with fecal matter—would receive during processing. Every one-and-a-half seconds or so, Clements would grab a piece of meat with her gloved hands and layer it between sheets of plastic inside a box that could hold up to 40 pounds of chicken parts. By the time she left her job in January of 2014, roughly two years after she had started, she had developed carpal tunnel syndrome and bronchitis, both of which she now attributes to her time at Perdue.

When I spoke with Clements over the phone recently, she recalled how the line at Perdue would get backed up whenever it wasn’t fully staffed. These backups, she told me, frequently resulted in the raw meat spilling onto the factory floor. Not surprisingly, given her experience with her former employer, she didn’t hesitate to offer her opinion when the topic of poultry-plant line speeds was broached.

But that’s not how the poultry industry sees things—or how the U.S. Department of Agriculture sees them, for that matter. Later this year, the USDA is scheduled to implement a set of controversial changes to its regulations governing poultry processing. If these revisions are made, maximum line speeds at American poultry plants will in fact be going up significantly—even as the number of USDA-trained government inspectors at these same facilities shrinks, and as they’re replaced with poultry-company employees. According to the USDA’s Food Safety and Inspection Service (FSIS), these changes are critical to the long-overdue modernizing of our poultry inspection process. The agency has been moving towards them since 1999, when it introduced a pilot program known as the HACCP-Based Inspection Models Project, or HIMP. (HACCP stands for “Hazard Analysis and Critical Control Point”—and, arguably, a failed government bid at concision.)

Converting to a HIMP-style system, says the agency, will actually result in saferpoultry, and won’t have any adverse effects on the health of poultry workers. “The United States is continuing to rely on a 60-year-old poultry inspection system that was developed under the Eisenhower Administration,” Catherine Cochran, a spokesperson for the FSIS, wrote to me in a recent e-mail. Her statement echoes those made by FSIS administrator Al Almanza, who last year penned an op-ed forFood Safety News in which he declared that “this proposal is first and foremost about making food safer.” Switching over to a HIMP-style inspection system, Almanza wrote, “will prevent at least 5,000 more foodborne illnesses annually.” (In making such a claim, he is likely extrapolating from data in a 2011 USDA reportthat showed lower incidences of salmonella and fecal contamination in the HIMP pilot factories than in the non-HIMP factories. Two years after that report, the U.S. Government Accountability Office, a nonpartisan Congressional investigative agency, issued a retort to the USDA study that called many of its conclusions into question.)

The USDA’s assurances notwithstanding, many critics would like to know how, exactly, the new system is supposed to make our poultry supply safer, given two of its most notable features: a 25 percent increase in the speed of processing lines, coupled with a 40 percent decrease in the presence of government inspectors in our nation’s poultry plants. That’s a highly risky combination, says Christopher Leonard, whose recently published book, The Meat Racket, explores the rise of Tyson Foods and the evolution of the American poultry industry. Last February, an investigation by Consumer Reports magazine found that 97 percent of all chicken breasts sold in American supermarkets harbored illness-causing bacteria, including E. coli and salmonella. Reshaping our poultry regulations along HIMP guidelines, Leonard says, would “clearly make the system less safe than it already is. The safety inspection regime is already strained to the point of breaking.”

It’s even harder to make the case that HIMP won’t affect the health of poultry workers, who, according to the U.S. Occupational Safety and Health Administration (OSHA), already report an injury rate that’s more than 50 percent higher than the injury rate for all U.S. workers. A recent study by the National Institute for Occupational Safety and Health (NIOSH) found that 42 percent of workers at one South Carolina plant showed evidence of carpal tunnel syndrome, attributable to the constant repetition of specific hand and wrist motions at certain speeds. “Line speed affects the periodicity of repetitive and forceful movements, which are the key causes of musculoskeletal disorders,” wrote NIOSH director John Howard after the study had been completed. Ramp up line speed, and it seems inevitable that carpal tunnel—and line backups, like the ones Clements saw spilling meat onto the floor—will go up, too.

But for all the debate over HIMP’s potential impacts on consumer and worker safety, there’s no debating the reason the poultry industry would like to see the new system put in place: money. In America’s poultry plants, says former USDA inspector Alvin Sewell, “production rates are everything.” Should HIMP rules become standardized across the nation, the maximum allowable speed of processing lines will rise from 140 to 175 birds per minute, translating into an extra $256 million a year for the industry. But poultry companies won't be the only ones realizing a windfall from changing over to HIMP: by decreasing the presence of government inspectors on processing lines, the USDA estimates that it will cut its own personnel costs by as much as $90 million in the first three years after implementation.

And critics point out that while government inspection would go down under the revisions, poultry plants are being given permission to expand their use of powerful chemicals to kill off dangerous bacteria during processing. Under current law, poultry plants must formally request authorization from the USDA in order to subject their carcasses to antimicrobial baths, using powerful chemicals like chlorine and peracetic acid. But under HIMP regulations, the USDA would simply issue a blanket pre-authorization to any and all poultry companies who decide to engage in the practice.

During the public comment period that took place after the USDA announced the regulations, more than 175,000 concerned stakeholders wrote in to express their opinion of the proposed changes. Then, in March, a consortium of more than 100 different environmental, workers’ rights, public health, and animal welfare groupswrote a letter to President Obama, urging him to use his executive power to stop the changeover; among their many stated concerns was a concern over “allow[ing] poultry company employees to do the job currently done by 800 USDA inspectors.” That same month, 67 Democratic members of Congress (and one Republican)drafted a letter of their own to Secretary of Agriculture Tom Vilsack, asking him to suspend action on implementing HIMP, arguing that such a shift would “undermine” the agency’s commitment to “food safety and humane slaughter practices.” (Last October, the Washington Post reported on the disturbing connection between processing-line speeds and the gruesomely inhumane treatment of chickens that arrive on the butchering line alive rather than dead.)

But to really understand whether the HIMP changes will make food safer, as the USDA claims they will, “you’ve got to know the industry,” says Sewell. And once you do, he adds, you realize that “the industry sees one thing: 175 birds a minute. Consumer safety is not a primary concern. That’s just the nature of the business.”